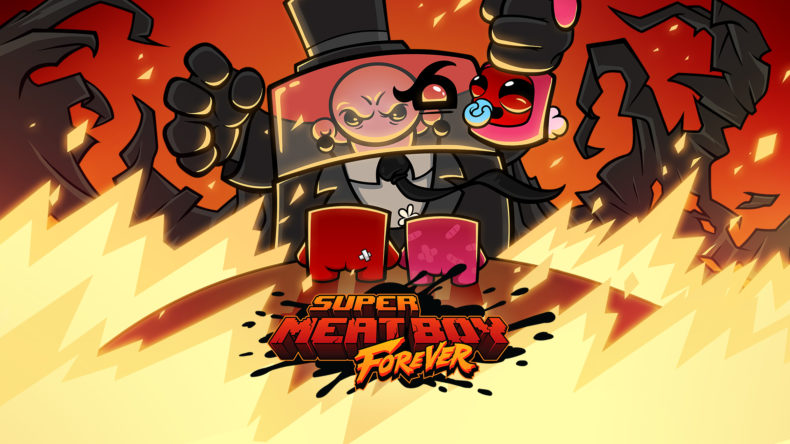 Back in 2010, indie gaming was really starting to take off. Titles like Braid and Castle Crashers had stormed into gamers’ hearts thanks to the Xbox Summer of Arcade, and games made by a handful of developers were getting more attention than ever. Team Meat released Super Meat Boy in October of that year and changed 2D platforming forever. With exceptional controls and often evil level design, Super Meat Boy was featured on plenty of GOTY lists and loved by thousands upon thousands. Now ten years later, our meaty hero is back in an all-new adventure with Super Meat Boy Forever.

Since thwarting the evil Dr Fetus, Meat Boy and Bandage Girl have had an eventful few years. The birth of their adorable new baby Nugget is keeping them busy, but this idyllic family life wasn’t made to last. The dastardly unborn medical practitioner is back, and is hellbent on revenge. An unsuspecting Nugget is the perfect target for his villainous plans, and one kidnapping later you’re flung into an auto-running rescue mission. 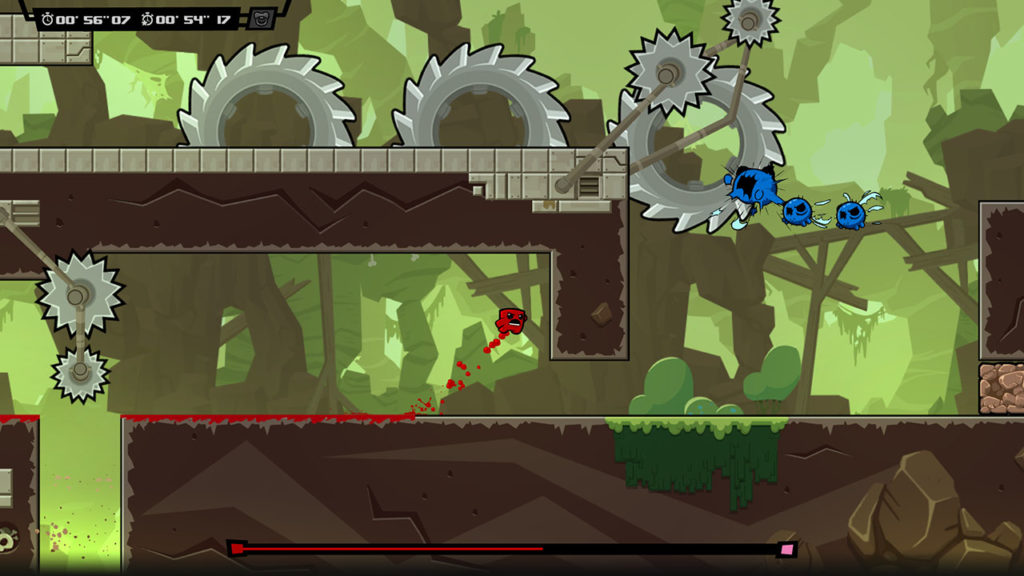 The main difference between Super Meat Boy Forever and its predecessor is the fact that you no longer control your movement. Meat Boy runs automatically, so your job is to jump, duck, and dash your way around obstacles. There are only two buttons you need to worry about as you hunt down Dr Fetus, the jump/dash button and the duck button. Jumping is fairly self-explanatory, and when in midair dashing can give you some extra momentum as well as smashing walls and enemies. Ducking isn’t just handy for dodging saw blades. If you’re flying through the air too fast, a quick hold of the duck button will send you plummeting back to the safety of the ground.

Unlike a lot of auto-runners, stages aren’t straight lines to the goal. There is a lot of verticality thanks to Meat Boy’s trademark wall jumping, and you can even change direction by bouncing off a hard surface. There’s generally one set path to take to make it through a stage, but sometimes you’ll need to follow paths to switches or bounce backwards and forwards down a corridor to slowly break down a wall.

Throughout the few hours it takes to rescue Nugget, there’s no shortage of new obstacles put in our meaty mate’s path. The trademark saw blades make their triumphant return, but there are also fans that blow you across levels, gravity shifting areas, and even metal boxes you can shove about the stage. Every new level brings something entirely new to the table, and by the end of the game, you’ll have mastered dozens of different mechanics. 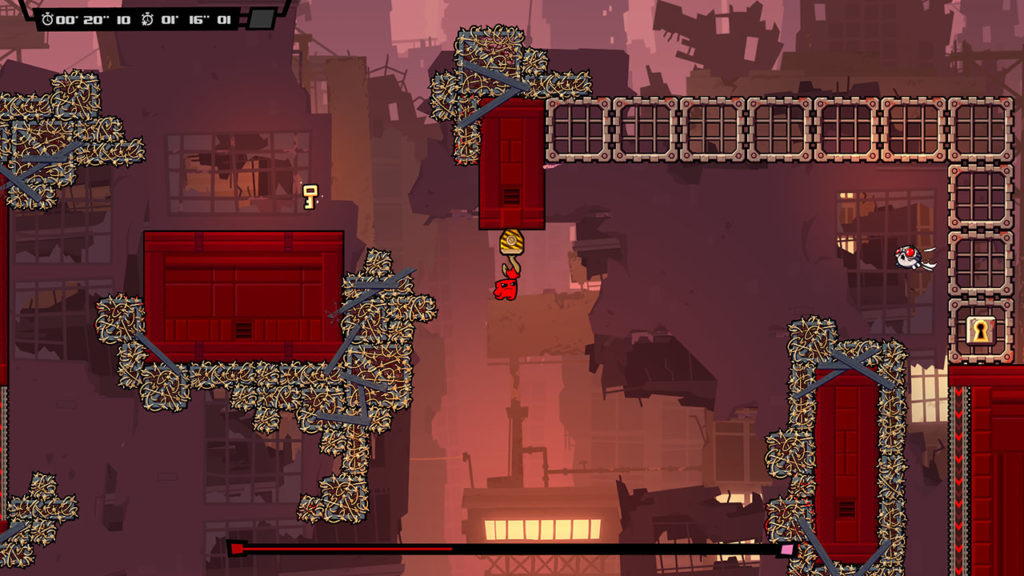 Each of the four worlds ends with a screen-filling boss fight. These confrontations are some of the most infuriating sections of Super Meat Boy Forever, and only get worse as you progress further. Instant death means you’ll have to flawlessly execute your attacks and evasive maneuvers, with one wrong move standing between you and despair. In a game that runs only a handful of hours, I spent around a third of that time butting heads with the final boss. Failure after failure stacked up, and my entire time facing the big bad was utterly miserable.

Outside of the bosses, there are plenty of other challenges in Super Meat Boy Forever. If you beat the par time on a stage you’ll unlock its dark world variant, which turns the difficulty up to 11 without making you want to tear your hair out. Stages also have hidden pacifiers that unlock characters if you collect enough of them. Finding them is tricky and collecting them without dying is even harder.

Even though the game runs short, the replayability of Meat Boy’s latest jaunt is vast. Stages (outside of bosses) are procedurally generated, meaning there’s an infinite amount of autorun platforming to sink your teeth into. Despite the fact levels aren’t expertly crafted individually, the level design manages to be pretty impressive. If I hadn’t noticed the seed when starting the game I wouldn’t have realised they were made by some sort of magical platforming robot. 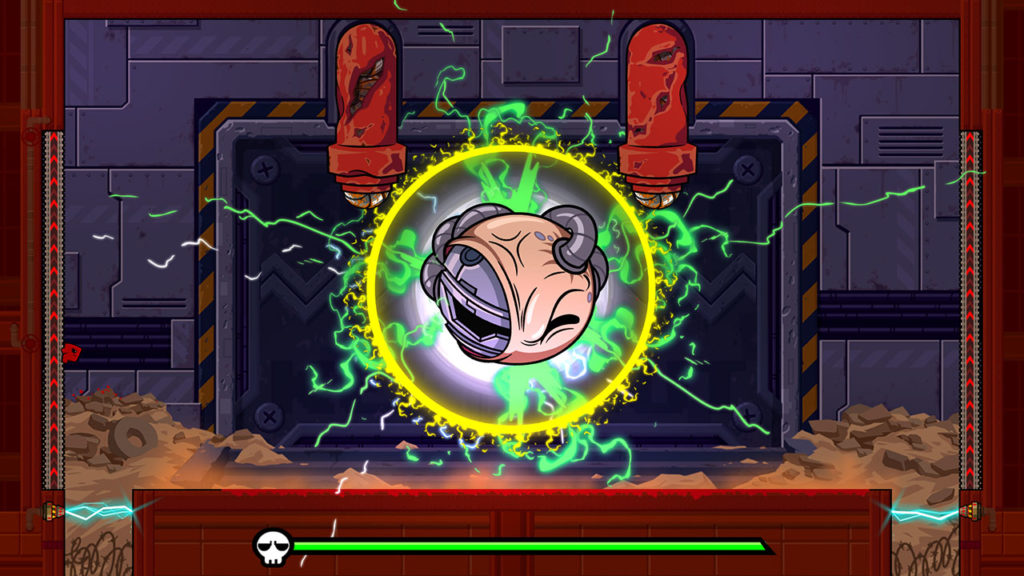 As much as I enjoyed my time with Super Meat Boy Forever, it’s hard to ignore how disappointing it is that the sequel moved away from platforming perfection to a genre associated with mobile gaming. Swapping from the precision control of the original game to having less control by design is a tough decision to stomach, especially after over a decade of waiting.

Super Meat Boy Forever is an entertaining autorun platformer that never manages to step out of the shadow of the first game. Although packed with ideas and an almost infinite amount of content, Forever’s lack of control and dismal boss encounters fail to live up to the high standards that Team Meat has set previously.

Although a fun autorun platformer, Super Meat Boy Forever just can't live up to the 2010 classic. Despite being packed with ideas, its awful boss fights and lack of control make it hard to recommend.