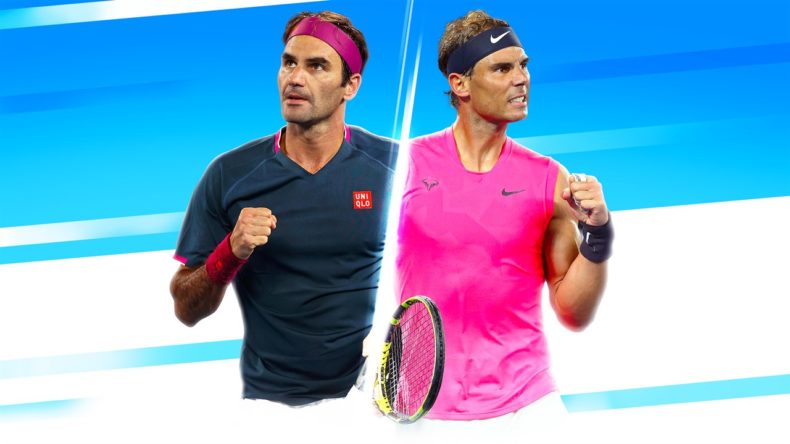 After a lacklustre entry into the series with Tennis World Tour, Nancon has looked towards the development team behind AO Tennis to bring a sequel that is much better than its predecessor. Whilst there’s much more in terms of content, Tennis World Tour 2 does have its issues, but once you get past the steep learning curve, it’s a rather good tennis sim. If you ignore the modes, the Skill Cards, and everything in between to focus on the gameplay, there’s a lot of improvement. Reading your opponent has become easier to do due to double the animations as before, but slight touches can affect where your shot lands.

Even after spending a lot of time playing, holding your shot button for too long will send it out the perimeters of the court. Timing is everything, and whilst it takes a bit of time getting used to exactly when you’re supposed to hit the ball, it’s the direction of your shot that never seems to accurately go where you need it to. Power and accuracy are key to any match, and when you struggle to get it right, then matches become more of a grind than a challenge. Another problem I encountered was that my player wouldn’t swing for the ball even though I was trying to slice it. This often happened when I was moving, and for a sport that requires quick movements to meet the ball after an opponent’s delivery, it became frustrating when my player wouldn’t react. 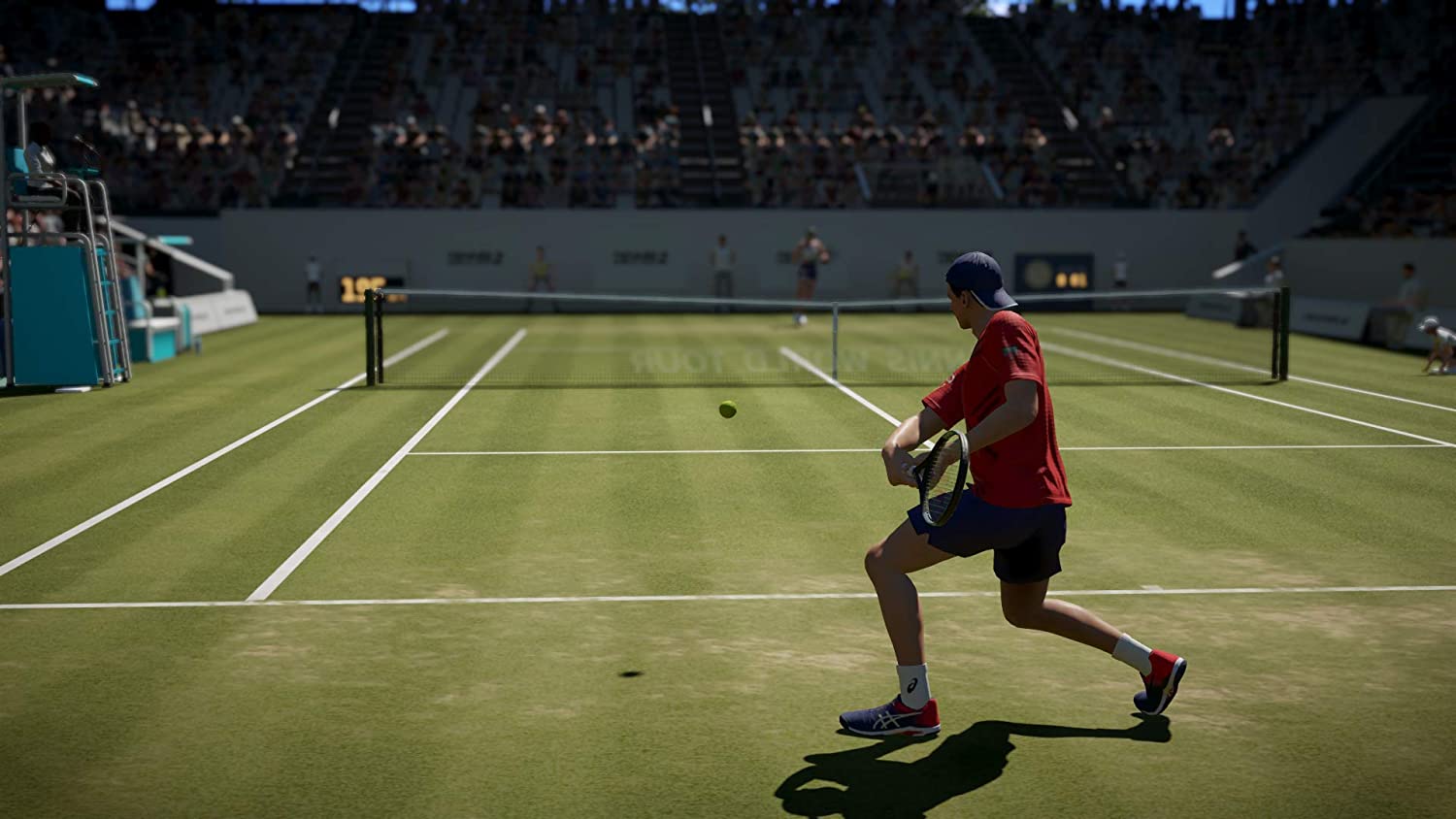 I eventually found my rhythm, and when you do, things are much smoother than the original, and winning a rally is about as satisfying as putting on pants straight out the tumble dryer. Serving can be tough to get your head around. The way in which you serve and add power comes in the form of a gauge that has a moving icon on. Get it in the centre, then hold in the your preferred shot button delivers a fast serve, but the amount of faults and double faults I picked up became far too frequent. Add into this the sensitivity of the left stick and I almost always hit it outside of the required zone. You can serve safely, and this was what I often opted for.

There were times when I enjoyed Tennis World Tour 2. The use of Skill Cards is actually a great thing to include. The more you play the game throughout the various modes, the more coins you get. These coins can be used to buy new gear, including rackets, shorts, and tops, but they can also be used to buy card packs. Before each match, you can equip a certain amount of these Skill Cards, and throughout the match you can use them to give you temporary boosts. Everything from adding an improvement to your top spin power and serving, to decreasing your opponent’s abilities can be used. There’re a lot of options here, and it adds a layer of strategy to each performance.

The Career Mode is relatively basic, offering your created character a chance to rise the rankings and take part in a multitude of tournaments across some of the different courts that are included in Tennis World Tour 2. Even though there isn’t tons to do, I enjoyed taking myself from zero to almost hero across the globe, facing a multitude of tennis players as I tried to become the best in the world. 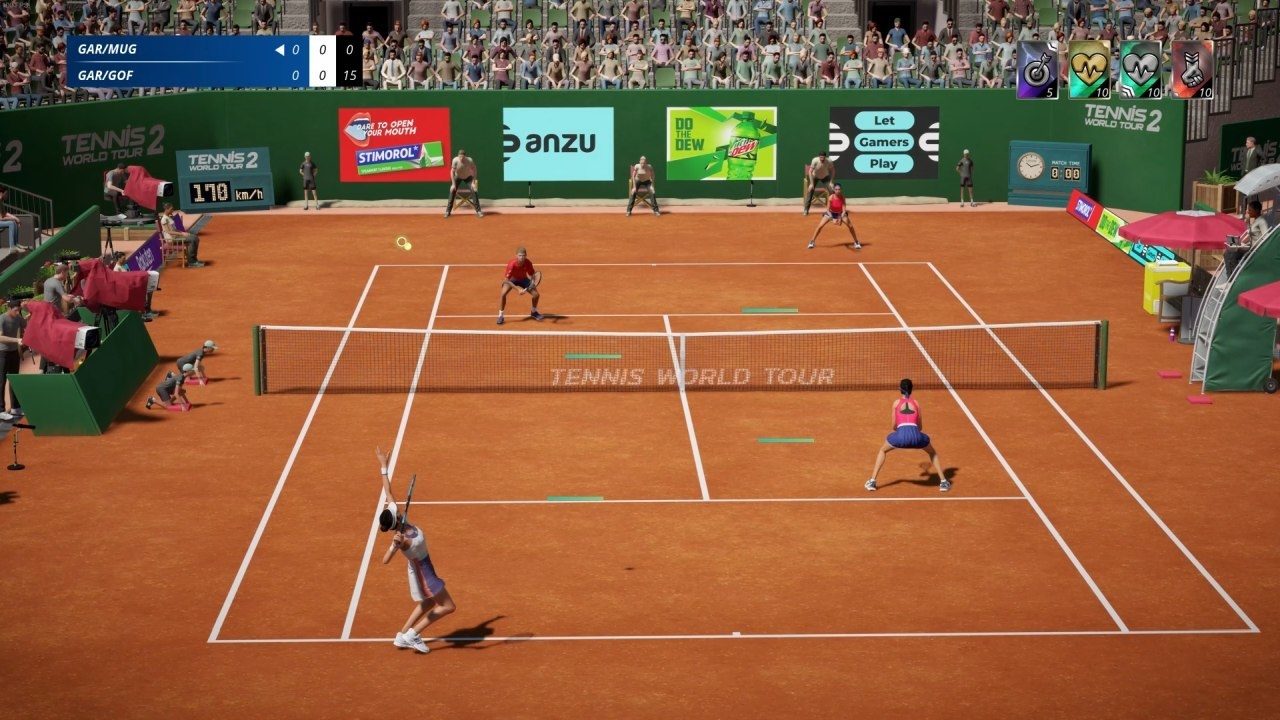 One new feature is the ability to play doubles matches locally or online. This makes for some interesting gameplay, and allows you to play tactically with a friend as you try and take down the opposition. It’s feels like a different type of match, solely because you aren’t hitting every ball and are relying on your teammate a lot of the time. I enjoyed playing doubles as it provided a nice step away from being on my own, and allowed me more options when playing my shots.

The roster on offer is a healthy one, letting you play as famous tennis players such as Roger Federer, Grigor Dimitrov, and Caroline Garcia, and stadiums and courts such as the ones included in the Ace Edition boasts the locations seen in the French Open tournament Roland-Garros. If you’re only buying the standard edition, there are still a great selection of courts from across the world. Visually, the courts are fantastic, it’s just the crowds, ball boys/girls, and umpires that all feel static. Player animations tend to have the same actions in the transitional moments between gameplay, but in the matches, they move and look pretty well.

Tennis World Tour 2 is a definite step up from Breakpoint’s attempt, with more animations, a bigger roster, and some decent gameplay. The stadiums look good, but much of the movement of everyone other than the actual athletes is very stiff, with some not moving at all. If you’re a tennis fan, I believe you’ll enjoy playing as some of the world’s best in some of the greatest locations. With gameplay that has a satisfying result after a pretty steep learning curve, it may put a lot of people off early on, but it’s a solid tennis game that lays the foundations for a solid future.

Tennis World Tour 2 has gameplay that takes a while to master, but the healthy roster and well-designed courts offers a lot for tennis fans.

You may also like
Big Ant Studiostennis World Tour 2PC