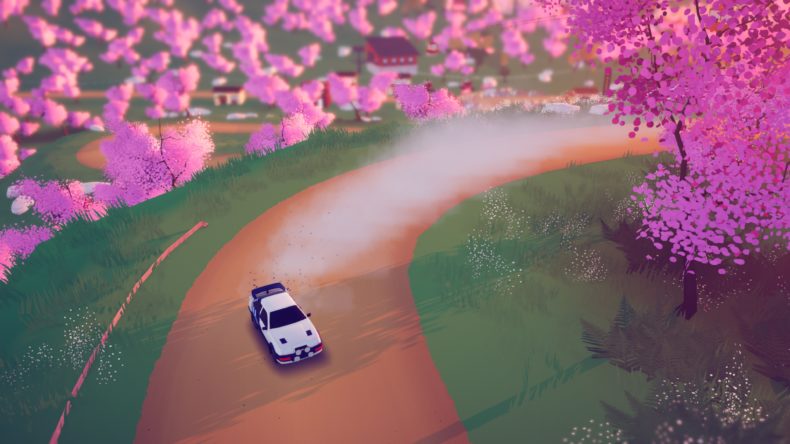 I rarely talk about the soundtrack of a game, but art of rally is so inspiring in that department; that’s got to change. The glorious blend of synth and Eighties beats gave me goosebumps, its sound somehow the perfect accompaniment for the retro aesthetic of this wonderful rally game. I don’t even care that I am approaching my late thirties and should never utter this phrase, but art of rally has a banging soundtrack.

Some of you may remember developer Funselektor’s previous game, Absolute Drift. It was a surprisingly realistic drifting game with a low poly… almost Mirror’s Edge-look with its clean whites and stark reds. All from a top-down perspective. Art of Rally (stylistically “art of rally”, minus the capitalisation) takes that idea but takes us back to the golden era of rally driving, complete with recognisable recreations of classic cars from the 1960s onwards. They aren’t licensed, with names like “das whip,” “the cozzie sr5”, and even the “turbo brick,” but they look and sound like their real-world counterparts. 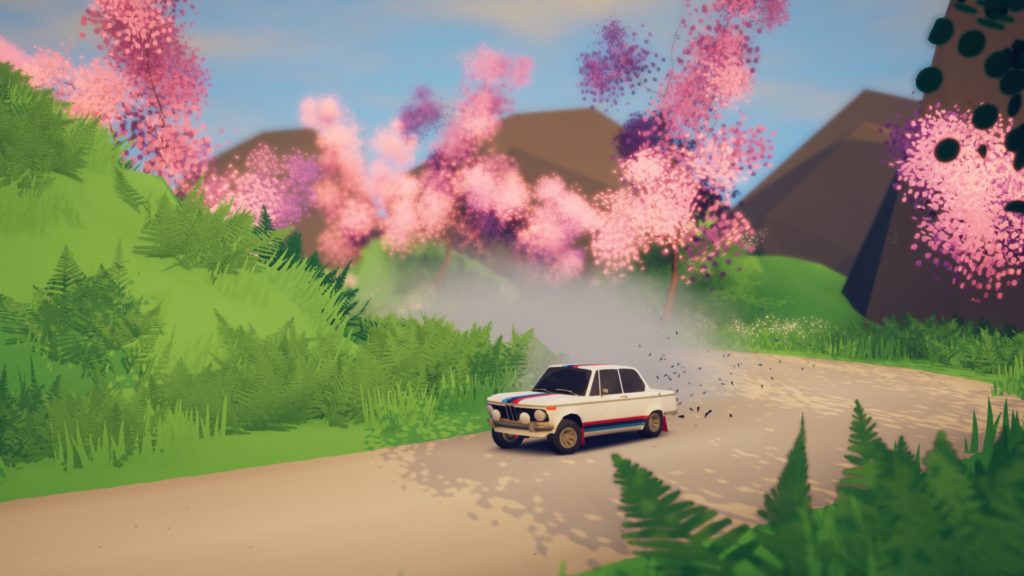 This commitment to historic rallying extends to its almost encyclopedic presentation, too. Each vehicle comes with a brief history lesson, about the origins of its appearance and performance in the rallying world. When you jump into career mode (which is split into decades and years) it gives a short summary of the direction the sport was taking during each period as you progress. It’s all completely optional reading, but it’s quite nice to see nonetheless.

Before you dive into career mode and its journey through the years of sliding cars around on muddy surfaces, art of rally begins with a nod to its predecessor, as a talking statue appears out of the ground to welcome you to the game and send you on your travels. This immediately rolls into a short tutorial that teaches you the basics of driving, before leaving you to your own devices in a full, free-roam map. This lets you test out the handling and, as you progress through the main game, test out unlocked cars before heading into competitive rallying. 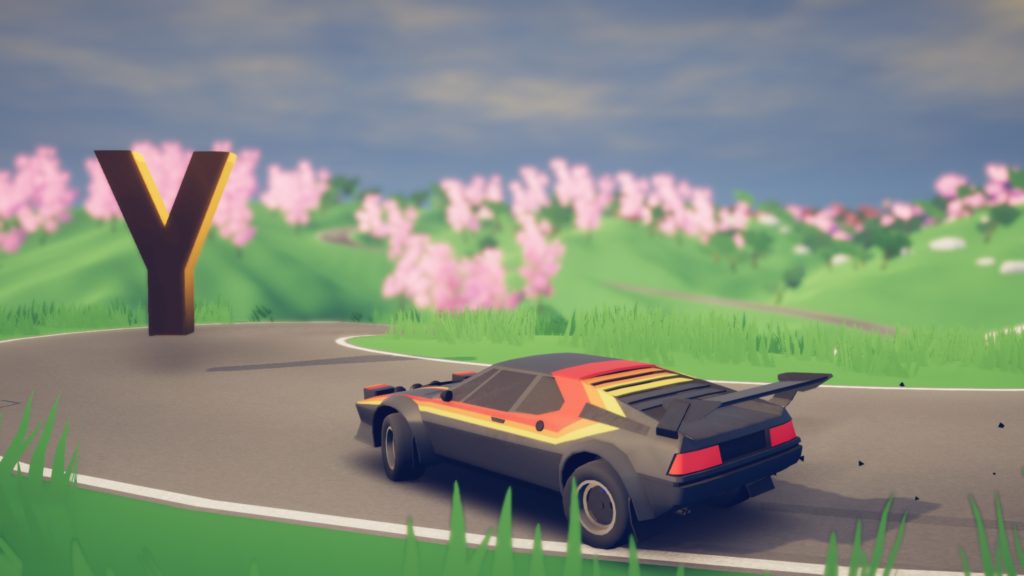 Free roam isn’t just an empty map either, at least not at first. There are cassettes to find (which unlock new banging tunes), photo locations, and even a Tony Hawk’s style letter hunt, spelling out the word R-A-L-L-Y, which will unlock the next free roam map. Yes, there is more than one. These really do add a little extra to a game that so easily could have been nothing but rally stage after rally stage, they can even be a palate cleanser in between rallies as you drive around, chilling out to that awesome soundtrack.

Driving around is where art of rally really shines, as you’d expect. Each car handles differently as you throw them around the various stages of countries like Japan and Finland, with almost as much realism as a DIRT Rally or WRC, but with some nice customisation to make it playable for more than just racing game enthusiasts. As you move through the years in career mode, driving more and more modern cars, faster cars, you learn to be a bit more daring through certain types of corners and begin learning how each type of car behaves under braking or while lifting off the throttle through corners. 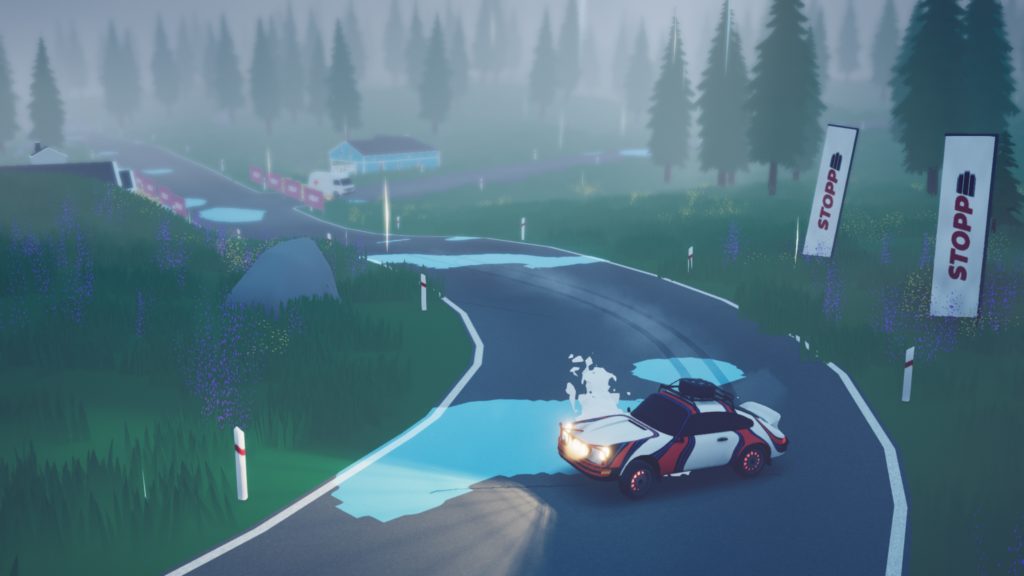 Career works very well in that regard, moving at the right speed to introduce faster classes of car at the right pace, allowing you to get used to the increasing power of each decade. It throws the odd curveball at you now and again, with a bit of fog, rain or even a night race forcing you to sharpen your reflexes and adapt. You don’t want to use up a precious restart (they’re a finite resource in career rallies), after all.

If you do fancy a bit of extra challenge, you could always try out one of the online events. These limited-time stages put you in a specific car on a specific course, and you might not be prepared for what is thrown at you. Equally, you might fancy jumping back into free roam or setting up your own, custom rally events to test your skills or just have a little fun in a newly-unlocked car.

No matter where you go, the view is undeniably lovely. The low poly style combined with the lighting and vibrant colours, makes for a beautiful game. The bright pink of the cherry blossoms in Japan, the sandy beaches of Sardinia or even the frozen lakes of Norway, all look incredible as you race around in your bellowing beasts, engines roaring through the countryside. art of rally’s photo mode really lets you take in these sights, and there is no doubt in my mind that most players will end up playing around with this feature at some point during their time with the game. It’s so easy to use. 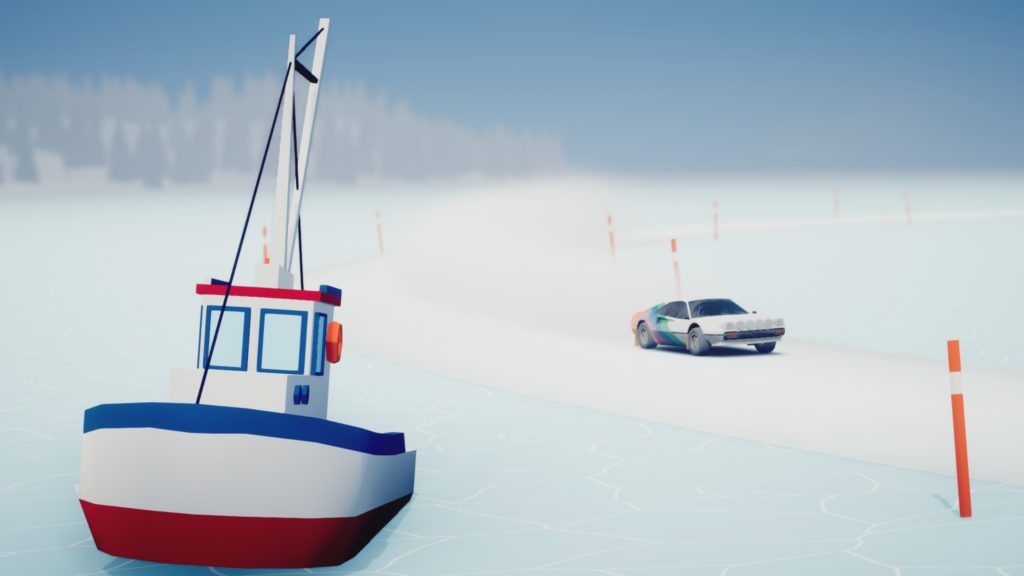 However, whether or not your own camera skills are worthy of credit, art of rally’s in-game camera does struggle from time-to-time, especially in twisty sections. You might find yourself unable to see around corners properly, or in the event of having a dance with a tree, spinning you around with a bizarre grace, you might not actually be able to see which way your car is pointing, because of foliage obstruction. It doesn’t happen enough to be a major issue, but it does happen enough to be a minor nuisance.

We’ve been absolutely spoiled by 2020’s sky-high quality within the racing genre. Funselektor’s art of rally is easily among the best of the year’s offerings, and one that I see myself returning to again and again. Do yourself a favour and do not sleep on this game.

From its incredible soundtrack to its unbelievably fun gameplay and striking visuals, art of rally is a genuine contender for 2020’s best racer.