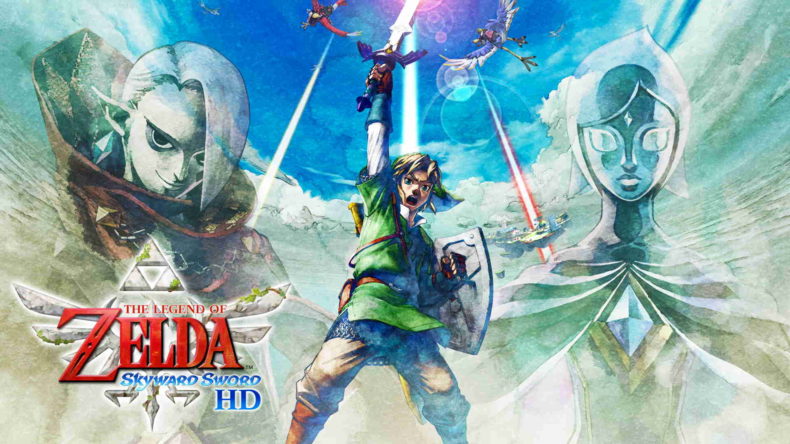 Skyward Sword HD has made me feel like a fool. Let me level with you: I did not like this game back in 2011. But I was also never the biggest fan of motion controls. Ten years later, Skyward Sword HD is one of the best games I’ve played this year? How, you might wonder, and what has changed. Well, it’s complicated, and a lot.

First things first, this is an adventure that feels fresh and relevant. Games have moved on, and there are things that have changed — and we’ll get to that — but one of the most clever things about Skyward Sword HD is that the original art style pops even today. There’s something about the vibrant, colourful nature, for sure. It also looks and feels almost… different to the other games. In fact, the more I played of Skyward Sword HD, the more I started to see the roots of Breath of the Wild laid out very early.

I wonder if, in 2021, some of the streamlining will seem odd to many. But to those who played the game back in 2011, the quality of life improvements are off the scale. One of the smallest changes (but also one of the best) is that you can speed through conversations now. Not all of them, and mission critical text will still sometimes be slow. But chatting with residents, you can just hit a button and power through it. 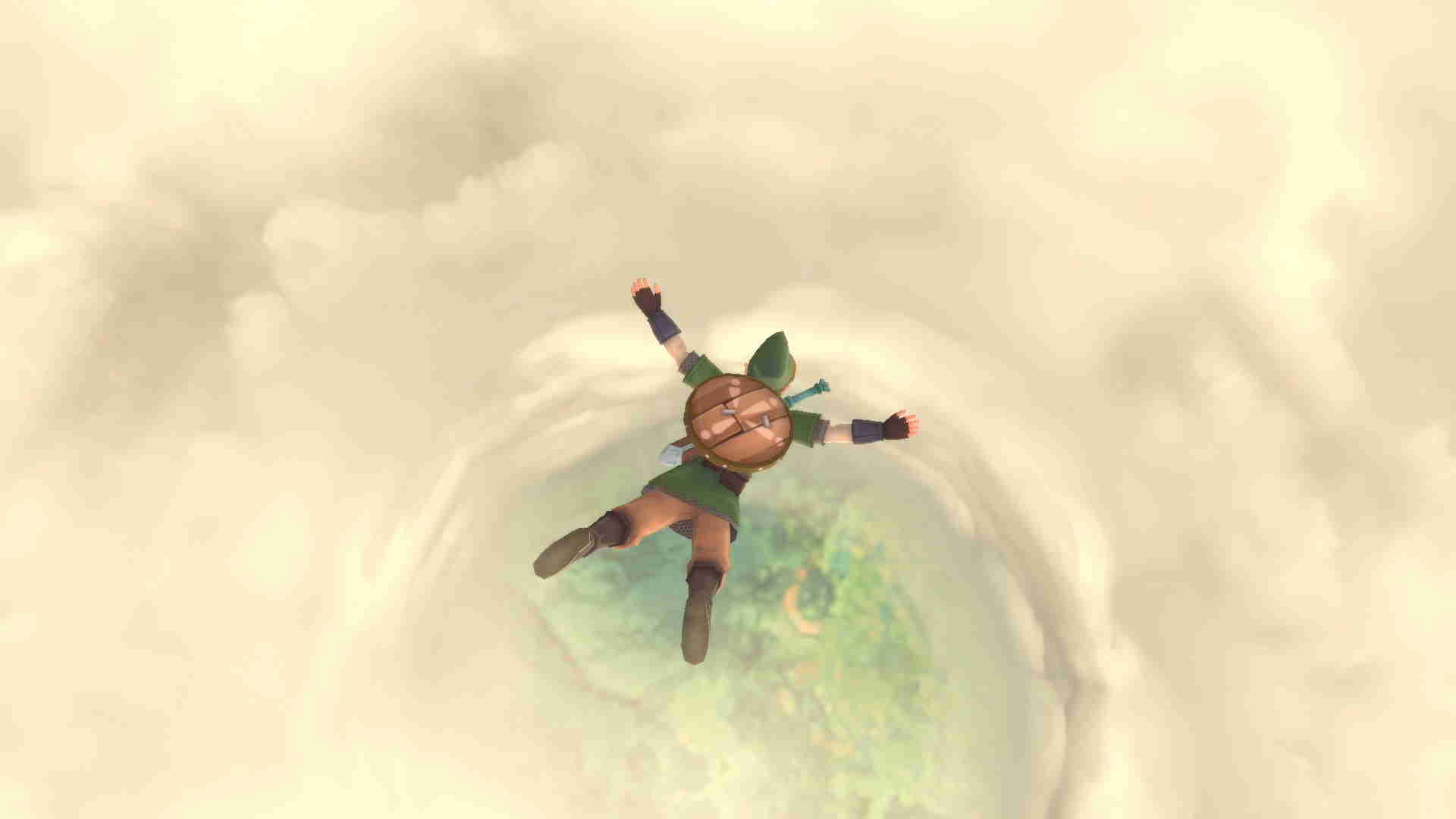 But that really is the tip of the iceberg. 60 frames per second? Check. Full camera control is also present. Yes, you read that correctly: it now offers full control over the camera. Non-motion controls, names for residents, auto-save, multiple save slots… the list just goes on. But of course, those controls and the camera are going to be the biggest, but not sole draw. Fi is no longer in your ear every five minutes. You won’t get a massive message even though you’ve caught ten of the same bug already. Early hours are shorter with things any player knows how to do no longer tutorialised. It’s a modern video game in most ways that matter.

It gets a little complicated with the options available for Skyward Sword HD’s controls, so lets start simple. Playing with motion controls is still the best way to play this game. With the way the Joy-Con controllers are laid out, it means you have two analogue sticks. This in turn means the left stick controls movement, and the right stick is the camera. It’s a revelation and makes Skyward Sword feel instantly new again. But frankly, due to the second analogue stick, it’s an improvement, too. 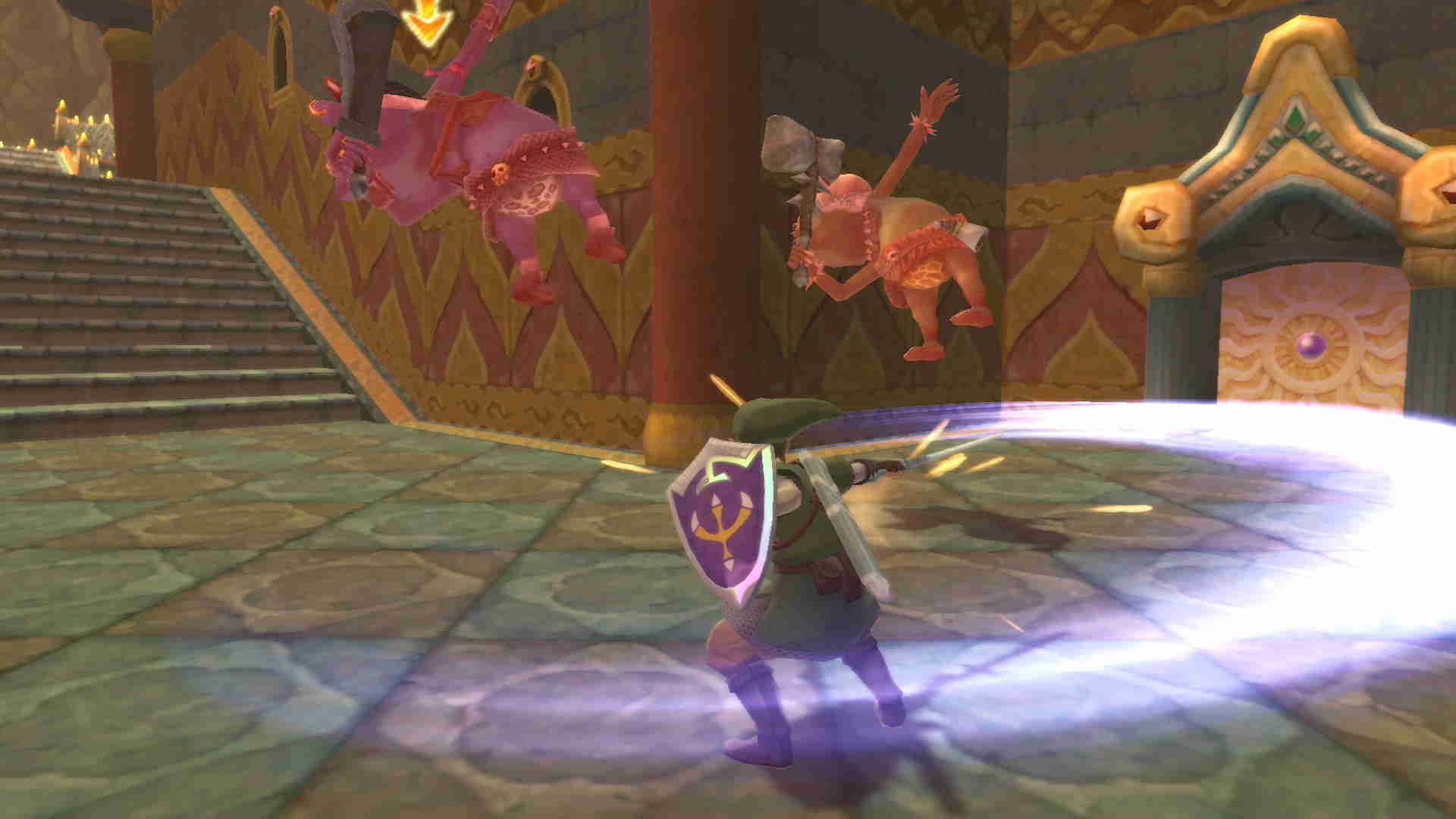 With a Pro Controller, it’s a strange one. The motion controls are directly mapped to the corresponding sticks. Clicking the left stick in will do your shield barge, which is an important move. The right stick is a direct copy of the sword motion controls. Flick it diagonally and you’ll slash that way. Flick it left, right, then left and it’ll do the spin attack. Up, down, up, the somersault attack. It works and is graceful.

Camera on the sticks

What is less graceful is how you now control the camera. Hold down the “L” bumper and it turns that right stick into camera controls. This feels very strange at first, but quickly becomes second nature. The thing is, this means you can’t control the camera when in the heat of battle very easily because you’re using the right stick for the sword attacks. 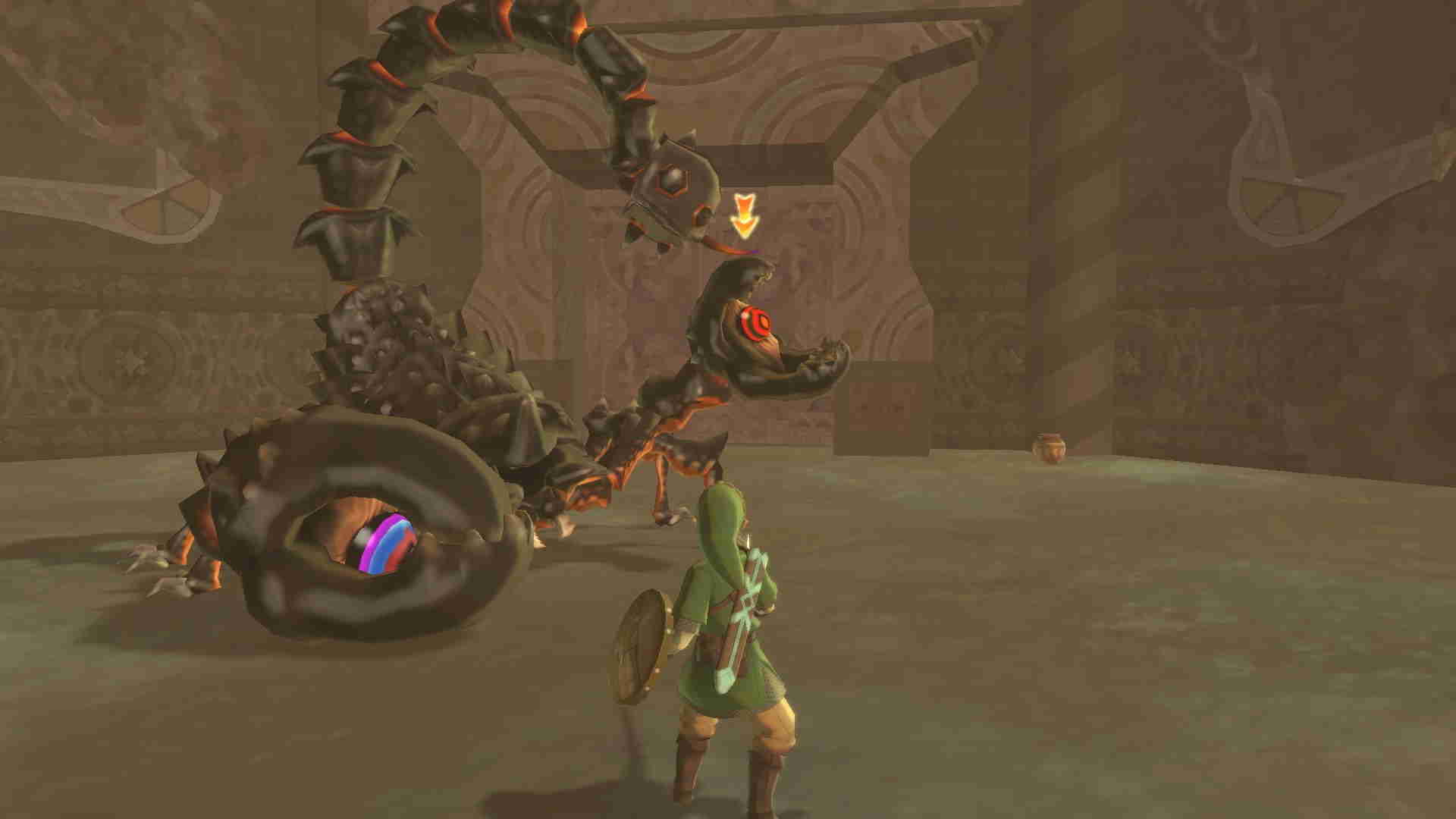 Now, it’s churlish to complain about something that wasn’t ever there to begin with being less than perfect. Truthfully, I racked my brains trying to think of a better solution, and couldn’t come up with anything. That said, it’s still better than the original because you can just hit the L bumper, and put the camera where you want. You can even look off ledges now easily, which sounds daft, but it’s a thing.

What I would like, however, is a mix of the two options. You can control the camera with motion on a Pro Controller, but it’s awkward and I couldn’t get on with it. I’d love to control the combat with motion and then use the left stick for flying in Skyloft, or moving motion controlled items like the Beetle. But this doesn’t seem to be an option, and it’s an odd choice. 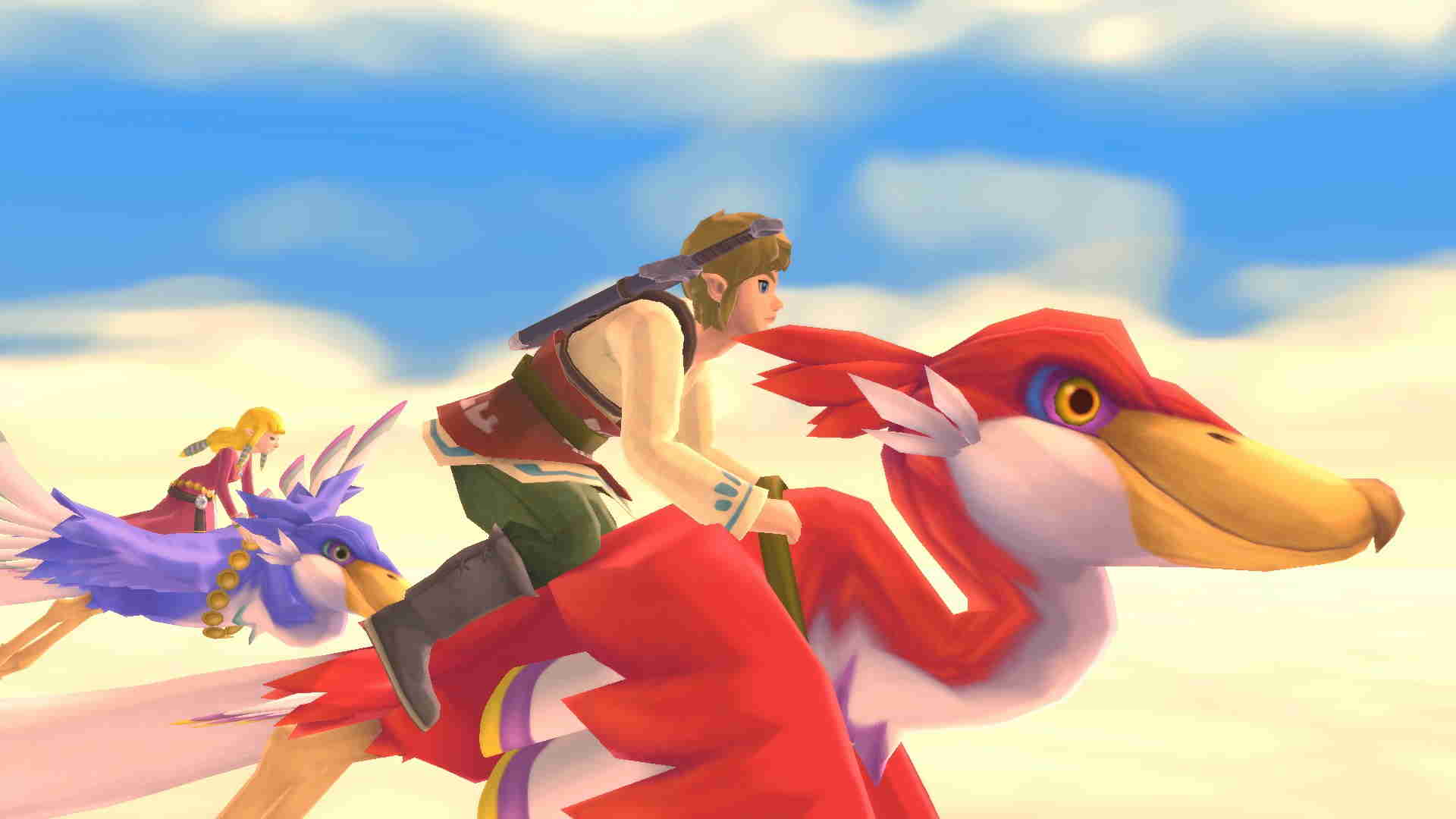 With the Pro Controller, you move your Gullwing with the left stick: there are no camera controls because you don’t need them. Likewise, the Beetle is controlled by the left stick. So why can’t I mix and match, and use the stick for those, but motion for combat? Honestly it’s the only knock against an otherwise terrific reworking of a control scheme. I guess if all else fails, you can hit ZL to focus the camera behind Link, at least.

All told, the changes and modernisations really do make Skyward Sword HD feel new again. It was already a superb adventure, one that has all the trappings of a classic game in the series. The Legend of Zelda: Breath of the Wild changed how we thought of Link’s adventure, but honestly, Skyward Sword HD suggests there’s still room for the older style, too. 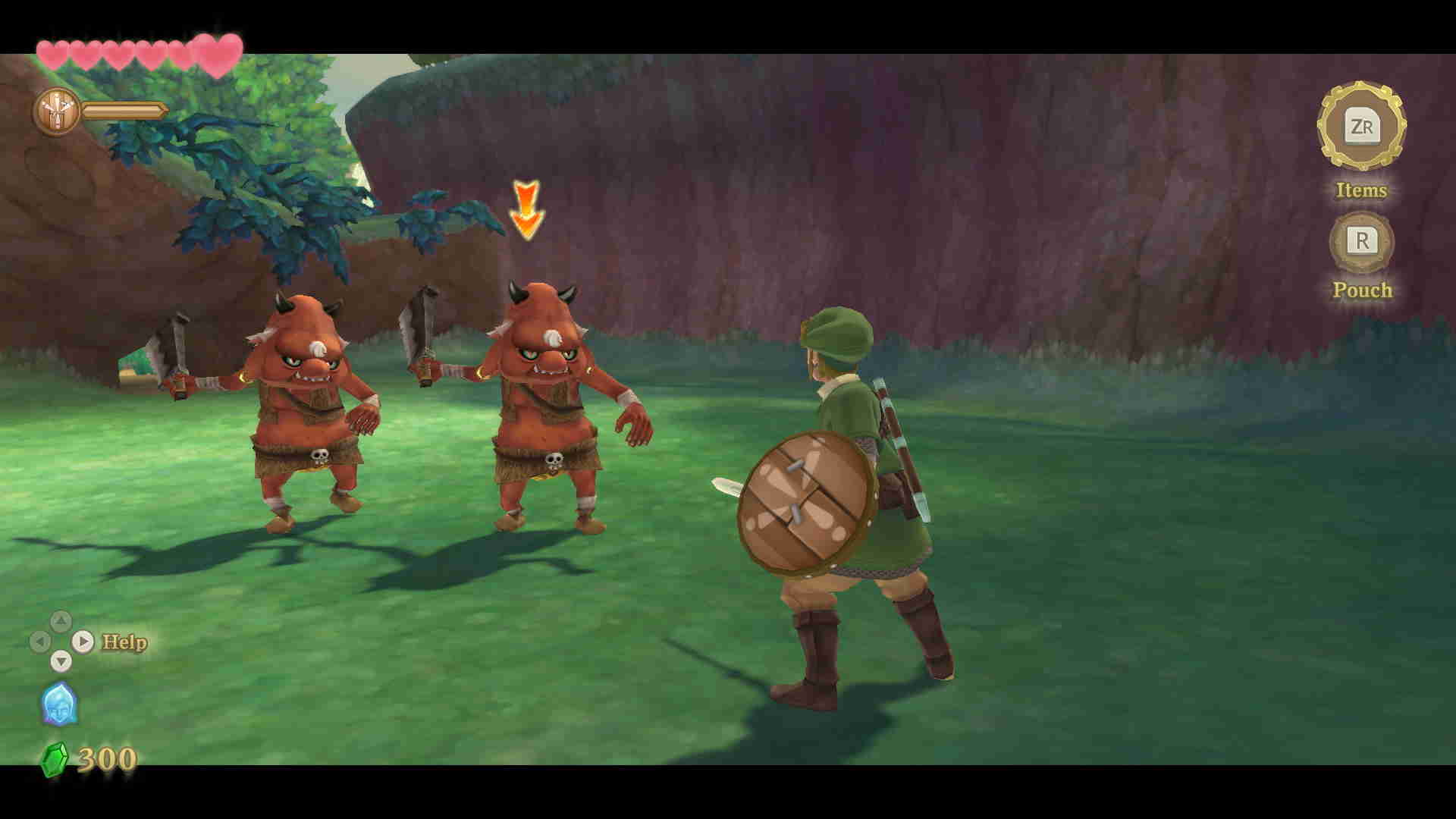 More than that, Skyward Sword in 2021 shows that other developers were paying attention to the design ten years ago. The shortcuts back to the safe areas; the dungeon design: it’s intricately designed. The areas leading to the next dungeon are interesting, with well written characters and cleverly introduced mechanics. I can’t get over how fresh it feels ten years on.

A different version of The Legend of Zelda

This is in large part thanks to the fact it’s a different kind of Zelda game. It feels more like the people in this world are alive, and real. Zelda herself looks different, and it’s very intentional. It’s an origin story for the series, too, though since it might be an entire generation’s first time playing, I won’t spoil more than that here.

There’s just so much to love about it. The ten year old visuals look striking even next to modern games, and it now runs like a dream. The soundtrack is one of the best in the series, offering some exceptional melodies to accompany your journey. The controls feel great, offering two vastly different ways to play, neither less valid than the other. There’s great boss fights and fun new items. Skyward Sword HD has made a fool of me, and really, I am just so happy I gave it another chance. This is the best version of a truly landmark game, and you need to play it.

Lack of hybrid controls is a shame

Skyward Sword HD has made a fool of me, and really, I am just so happy I gave it another chance. This is the best version of a truly landmark game.