The Swords of Ditto Review 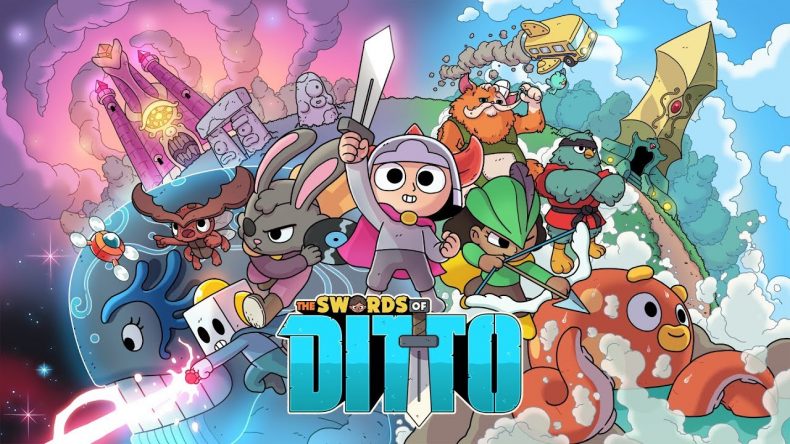 When was the last time a month went by without a game being compared to Dark Souls, in one way or another? The roguelike genre in particular, despite being around for a lot longer than Dark Souls, is absolutely stuffed to bursting with these comparisons. You know what, though? I’m not going to say that about Swords of Ditto, the new roguelike adventure from onebitbeyond and Devolver Digital. This is closer to old Zelda games than anything else.

The world of Ditto is tormented by the evil sorceress Mormo. Every hundred years, she rises to terrorise the world by releasing her creatures and generally messing up everybody’s day. However, every hundred years also sees a new hero chosen to become the Sword of Ditto, with them being sent off to banish Mormo for another hundred years. If they’re successful, the world lauds them as a hero and a century of light and goodness begins; if they die, Mormo will rule until the next Sword emerges in a hundred years’ time. You begin the game as a random character, woken from their slumber as the rain falls outside. There are no fairies shouting “hey, listen!” at you here, instead you are visited by a…giant talking dung beetle. Yep. Puku (said dung beetle) congratulates you on becoming the new Sword, basically whether you like it or not, and you’ll be sent to go grab the last hero’s sword from their statue in the centre of town. This transforms you into the hero you were born to be, before you’re sent to face off with Mormo. Needless to say, it doesn’t end well.

Now, this isn’t a spoiler. This whole affair happens to teach the player that when you die (there is no ‘if’ here, you will die), much like the excellent Rogue Legacy, your next life will begin in the shoes of the next Sword, one hundred years later. You will retain the knowledge and experience of your predecessor, after collecting the sword from their grave, but everything else will be lost to the sands of time. Amusingly though, as you die and restart, Puku’s introduction will become less and less enthusiastic, as he becomes tired of rolling out the same spiel to each Sword of Ditto. He’s a constant source of humour in the game. The thing about Swords of Ditto, however, is that it takes places over the course of just four days. This means that you only have four days to prepare for the final battle with Mormo, by destroying the two anchors that are buried within dungeons. Yes, time limits suck, even the game acknowledges this with its signature humour. Remember how I mentioned Zelda earlier? Although the general gameplay is more like the original game or perhaps A Link to the Past, the time mechanics on show here are reminiscent of Majora’s Mask. Unlike Nintendo’s N64 sequel however, rewinding time doesn’t change anything in the world; the only thing that happens when you turn back the clock in Swords of Ditto, is it simply extends your exploration time before having to face off against the final boss. You won’t be doing this on your first playthrough though, because you have to offer tokens to the deity Serendipity in order to unlock this ability. Even then, you have to pay for it. I was on my sixth or seventh game before I first rewound time, several hours in, which might put some people off. It’s worth sticking with it though.

There are actually many things that this game borrows from the Legend of Zelda series, but the best thing is the basic gameplay itself. Swords of Ditto is viewed entirely in the same almost-top-down perspective as the main 2D games in Nintendo’s series, and your basic controls are slashing your sword and using special items that are selected with the d-pad and used by pressing Triangle. The combat can be a little awkward sometimes, especially with certain enemies that simply wander through your blows and inflict damage without you really having a say in the matter. You can roll away from some attacks though, and my tactic of rolling behind enemies worked a treat for many of Mormo’s creatures. Especially when you can use enemy attacks against one another. There’s a nice RPG-lite system in Swords of Ditto that can really help you in combat as you prepare for that fated final battle. Instead of finding new armour and swords, you’ll equip toys and stickers, which offer unique bonuses and new ways to fight. Toys come in the form of things like a drone that can be used to fly over gaps and trip switches, or its self-destruct ability can destroy certain walls or inflict damage to enemies; or there’s a ring that shoots a devastating laser; a frisbee that bounces off walls and damages anything in its path. These can be bought from the toy shop in town, or can be rewards for completing toy dungeons as you follow the story. Given the randomly-generated worlds and dungeons, these toy rewards are also randomised for each playthrough, so don’t expect to get the same one each time. Stickers are something you can buy, find or trade for within the game, and they offer bonuses like added damage or elemental resistances, as well as new attacks that can really help in later levels.

It’s highly unlikely that, even if you’re lucky with toy and sticker drops, you’ll meet Mormo on your first try. Swords of Ditto is built entirely around repeat plays, allowing you to progress a little more with each attempt, and because you keep your level/XP progress over to your next Sword, enemies scale with you. You can’t simply grind out levels and expect to breeze through the next time, and new creatures emerge at higher levels, meaning you’ll have to learn their unique attacks and weaknesses, adding an extra layer of challenge to the game. Just when I thought I was getting the hang of fighting Mormo’s beasties, another new one would appear and I’d be flailing and rolling wildly, simply trying not to die again. But like Nintendo’s recent Breath of the Wild game, players do have the option to go meet Mormo straight away. Be warned though, that will test your skills to the absolute limit. Her tower is populated with the hardest enemies and fighting her without destroying the anchors is meant to be nigh impossible. It’s already a challenge when you’re prepared. All this variety is even more impressives when you see how beautifully animated everything is in Ditto. It reminds me very much of Adventure Time, with vibrant colours and some truly bizarre designs that somehow feel right at home in the game world. The monsters are all totally unique, each with their own stunning animations, and that’s before you count the bosses. Absolutely nothing in Swords of Ditto is poorly presented.

With Swords of Ditto, developer onebitbeyond has created a wonderful love letter to the Zelda series, but one that adds its own roguelike ingredients to differentiate itself from the games that inspired it. Its humour and bizarre style combine to add an extra flavour, making this another interesting and fun choice from the Devolver Digital catalogue.

Swords of Ditto is a very stylish mashup of 2D Zelda and roguelikes, in which you will not see everything it has to offer within the first playthrough. Its time limit is too constricting in the first few hours however, which might put a lot of people off an otherwise fun adventure.