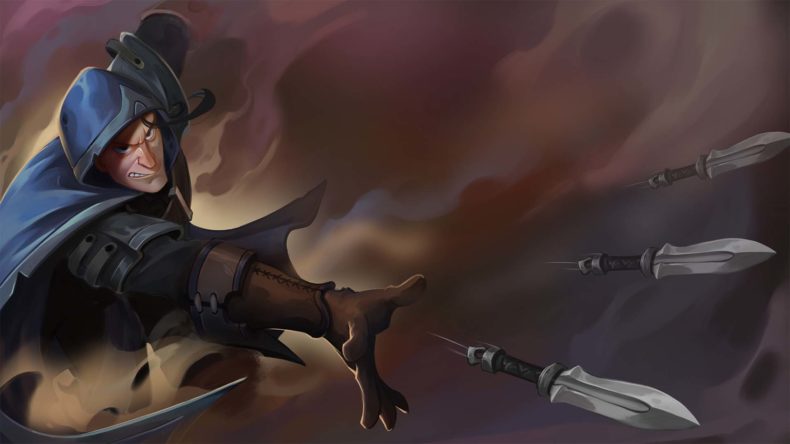 Now I’m sure we can all agree that cards make every game better. Whether you’re playing a full blown game of Yu-Gi-Oh, battling enemies in Baten Kaitos or creating the perfect deck in Slay the Spire, those little cardboard rectangles are always there to make me smile. Vault of the Void leans in closer to Slay the Spire than the other games listed, so prepare to fight a lot of enemies and make a lot of tough deck building decisions.

Upon starting a run you’ll have a few characters to choose from (once you unlock them anyway) and then a pair of decks to pick between. Once you’ve got your build sorted you’re then thrown straight into a hex-based grid full of icons ready to start your adventure. Don’t expect a rich narrative and reason for adventuring, the focus is solely on those card filled roguelike runs we all know and love.

The aim of each floor of the game is to make is from left to right and beat up a boss, but each tile has something on it that will interrupt that journey. Many of the tiles contain enemies to battle (which will shower you in rewards for winning) but there are also shops, places to rest and loot boxes to check out too. 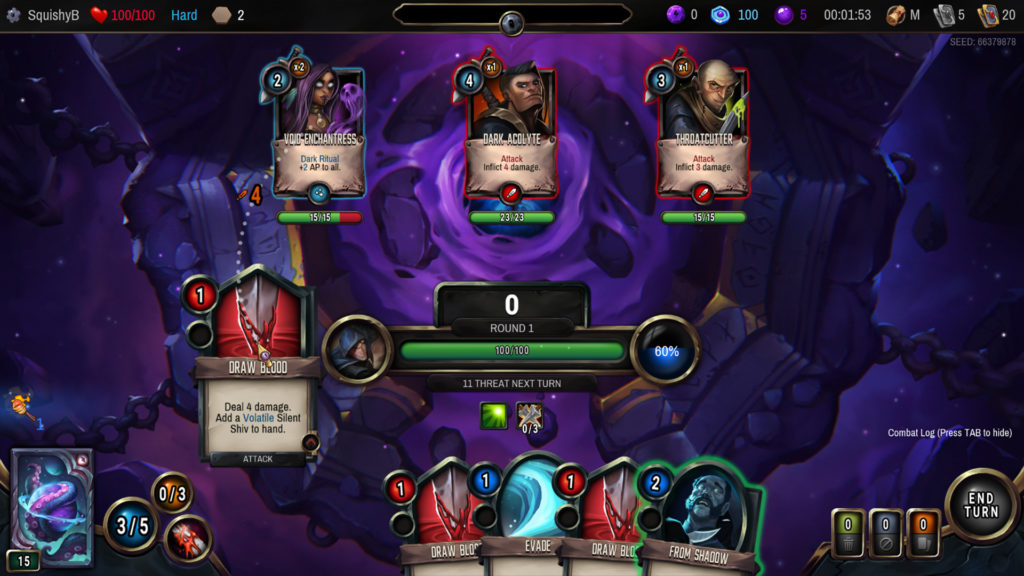 You’ll need to use all the cards and items you find once a battle starts, because these baddies don’t hold back. Each turn you have a set amount of energy to spend and can use it playing cards that have all sorts of effects. At a basic level some deal damage and some block damage, but it’s much more complicated than that.

Even playing as the starting class, you’ll have to learn how to best take advantage of the deck you choose and its unique mechanics. I started out with a bleed deck that dealt damage over time to my enemies, but also involved taking advantage of a complicated combo system that I didn’t understand until I was a few runs deep. After that I moved onto a mage with a deck that used shock damage and special zeal attacks to dispatch evil, and it only got more confusing from there. If you haven’t played a deck builder before, this might not be the one to start with.

Alongside all the different abilities your cards have, you also need to understand when best to purge cards. Purging a card discards it from your hand, but also gives you an extra point of energy to use. Energy is kept between turns, so it’s often useful to discard your hand when you’re done for that round of combat to make the next one even more brutal for the pesky enemies blocking the path. 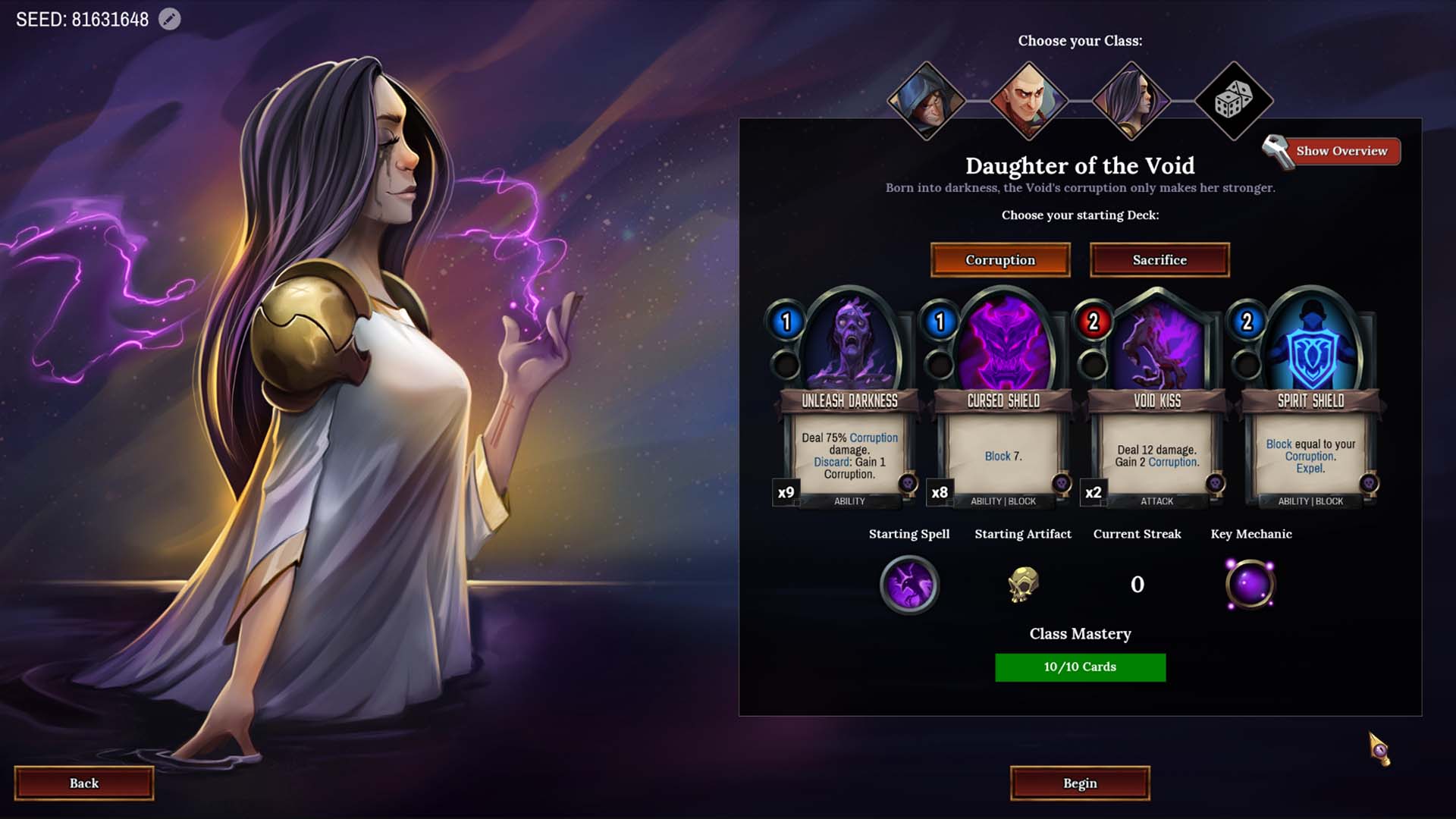 There can only ever be twenty cards in your deck, so you’ll have to really think about what cards are benefiting you the most. Take out too many block cards and you’ll get destroyed by aggressive enemies, but if you don’t have enough attacks then some foes will slowly setup devastating abilities and wipe you out. It’s a tricky balancing act, and one you’ll have to get used to if you want to succeed.

As well as switching up your deck, you’ll get plenty of other ways to power up your hero during a run. You can upgrade individual cards to make them outright better, insert gems in cards to add bonus effects, and equip different potions ready for the next fight. Each potion has a different effect on you or the enemy, and you can put one in your bag to use in a pinch and one of your belt to activate no matter what. It’s an interesting system that can really turn the tide of battle.

Don’t worry too much about failing runs, because even losing will help you improve. If you do well enough you’ll unlock new characters to play as, as well as the ability to master a card in your deck to improve it. I really appreciated making myself slightly stronger for the next run, because the amount of times I lost would’ve been pretty disheartening otherwise. 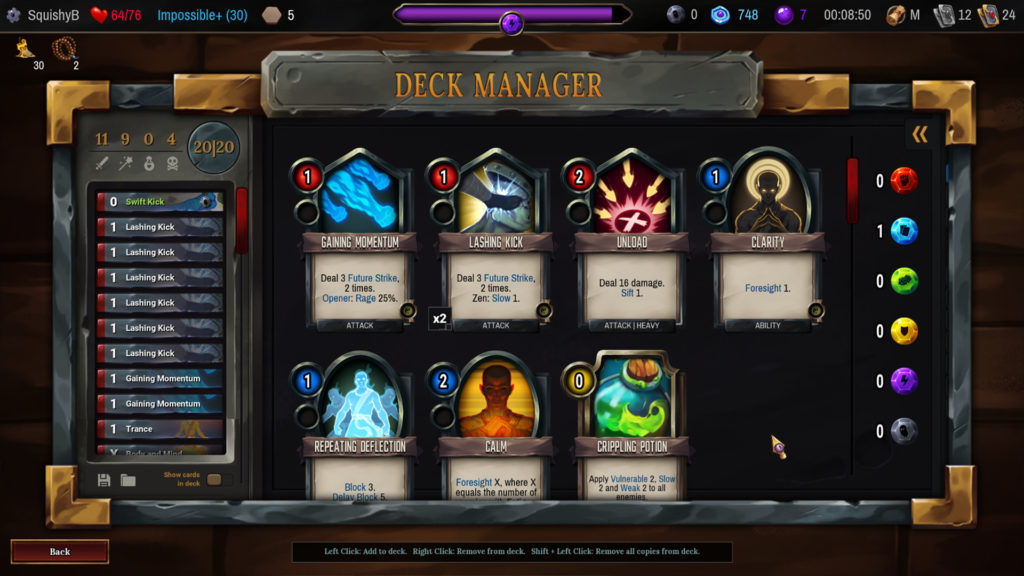 The main issue I had during my time with Vault of the Void was the complexity of the game. You’re not eased into the mechanics slowly enough, and even the tutorial is over too quickly to really sink in. The amount of unique mechanics you have to learn as each class is overwhelming too, and often put me off trying the new characters I unlocked.

If you’re a deck building master and want a really deep card game to get stuck into then Vault of the Void could be the game for you. The complex mechanics and systems aren’t particularly friendly to newcomers, but genre veterans will find a new favourite if they’re willing to put the time in.

The complexity isn’t friendly for newcomers

It’s not for the faint of heart, but if you’re a veteran of deck building you’ll find a lot to love in Vault of the Void.