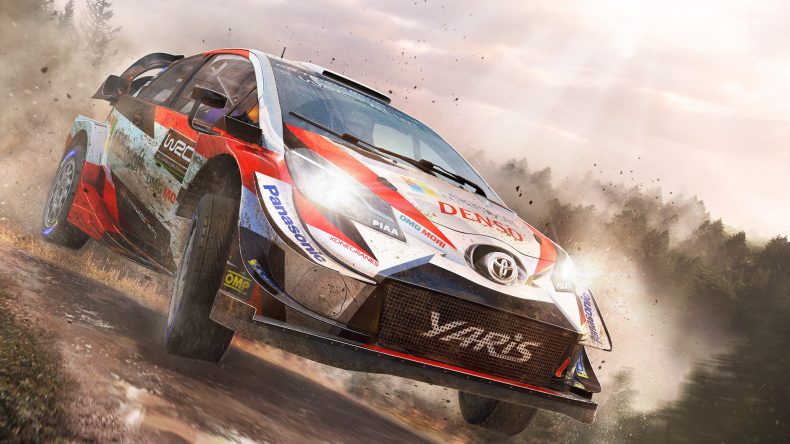 Haven’t you ever watched the World Rally Championship and wondered just how those drivers manage to go so fast on dirt roads that are barely wide enough to fit their cars? How do they not ricochet off the rocky outcrops that surround them? How do they not just launch off the side of that sheer drop? Well, in WRC 8 you can answer those questions for yourself. Albeit without the risks, which is always appreciated.

This is KT Racing’s fourth bite of the WRC cherry, and certainly its best yet. The realism and authenticity of this licenced rally game is incredible, easily rivalling the simulation of Codemasters’ DiRT Rally series, while remaining accessible for players of most levels. I won’t sugar coat it, WRC 8 really does replicate those real-life locations, complete with those uncomfortably narrow and dangerous roads, and it isn’t an easy ride. However, its difficulty levels do help, as they’re quite balanced and will fit most players’ abilities at some point. It means that slower, more cautious players can still compete against the AI’s times. Having said that, WRC 8 throws you right in at the deep end. As with the past games, it gives you a quick rally stage to see how you drive, at the end advising which driving aids might work for your play style. This opening drive comes without the aid of a co-driver’s directions however, which automatically makes it way tougher than it ought to be. After that, jumping into the career I chose to start in the Junior series (you can also now choose to start in WRC 2, if you want to get a head start on getting to that all important WRC placement), which threw me into one of the new “extreme conditions” events. This saw me driving an already severely damaged car at night, in a storm, to see just how far I could drive it. It’s a strange new addition, alongside other similar events such as manufacturer tryouts, but they are normally optional in career mode.

Career is where KT Racing has really put in the work, elevating its latest game above its predecessors. Before diving into events, you find yourself looking down over the offices of your team, ready to manage everything from R&D to crew recruitment and rest. There’s a hint of Football Manager about it, as you read emails (you will have to respond to some, especially when they’re asking you to pay for repairs between rallies) and schedule events between official rallies. Here, you will have to decide whether you want to try out for a manufacturer, do some training or simply let your team rest. This is important, as you will have to rotate crew members as they become fatigued, but allowing them to rest between rallies will restore their stamina more quickly. Recruitment and R&D will help with things like crew stamina and morale, though. Your performance will see you level up, which earns points to put into the R&D tree, leading to things like extra crew spaces and opening a spot for a physio and other things to keep your team healthier for longer. You can choose how you want your progress to go, whether you want to prioritise your people or your earnings. Or perhaps you’d rather your mechanics worked faster on repairs. There are tonnes of options here, including ones that actually upgrade your car once you reach the WRC proper. It all takes WRC 8 in a new, better direction. It feels slightly more involved, but never overwhelming, and it rarely takes more than a couple of minutes to sort these things out, before you’re back behind the wheel.

Behind the wheel is where you really want to be and KT Racing knows this, which is why WRC 8 feels so good to drive. Listening to your co-driver’s instructions and reacting in real-time always provides a feeling of exhilaration in rally games, but the realism provided by the licenced locations here is something else. The snow and ice of Sweden provides an early career challenge, its slippery surfaces are, ironically, a baptism of fire for new drivers. Battling the elements is half the challenge for rally drivers, whether it’s sliding around on the Swedish ice, cutting through the soggy mud of Wales or navigating the treacherously narrow, dusty Italian stages. It’s never easy, never anything less than nerve wracking, but it always feels good to drive. It looks good, too. The previous games have looked decent enough, but lacked the visual fidelity of the rival DiRT games. Somebody in the financial department at publisher Bigben Interactive must have been given the green light to throw a bit of extra money at WRC 8’s production values, because it’s quite the step up. The problem was never the cars, which have always been faithfully reproduced down to the smallest detail, instead it’s environmental detail and lighting effects that have improved an awful lot in this year’s game. That extreme conditions event I mentioned earlier? The darkness pierced by the car’s high beams, highlighting individual raindrops and offering the smallest glimpse of the road ahead, it all looks marvellous. There are so many incidental details too, even down to the drone camera flying around, though roadside fans still look rather basic on the rare moments you see them close-up.

I have to commend KT Racing on fixing many of the problems from previous games and improving the overall World Rally Championship experience. Most of the improvements are small, but they add up to WRC 8 being one of the best rally games around.

Making small improvements over previous games not only adds up to WRC 8 being the best in the series, it’s also one of the best rally games around.