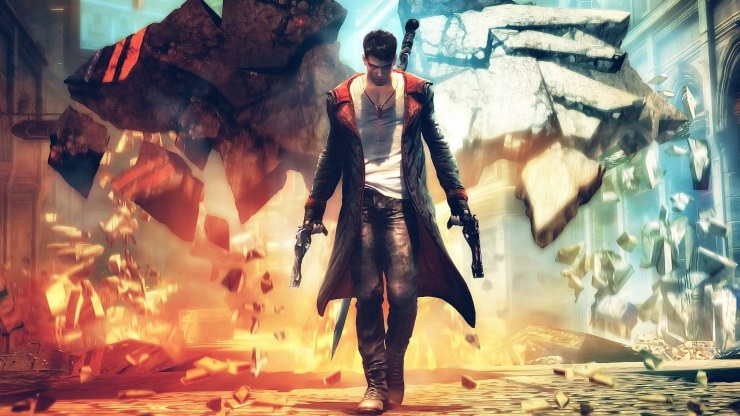 I’ve never made it a secret that I’m a fan of Ninja Theory’s games. In fact, I feel that, often, their games don’t get rewarded with the sales they deserve – nor do they get the respect they deserve. Speaking to Dominic Matthews (Product Development Manager), it appears he doesn’t agree. Even as they are drafted in to help on games like Disney Infinity 2.0, it appears they feel very much loved.

“We absolutely get the respect that we deserve. A day doesn’t go by without the studio receiving an email, letter or tweet from someone thanking us for making game that they really enjoyed playing.”

But would he agree, at least, that they’ve been unlucky? Critical success is one thing, but DmC had a violent backlash.

“We haven’t been unlucky. It is a reality that critical success doesn’t always lead to commercial success. There a long list of games that have been incredibly well received but that haven’t had the sales to match. I feel proud of the games that Ninja Theory have made. We’re fortunate enough to have had a lot of people play our games and lot of those people enjoy them. We’re a developer that people care about, one way or the other, which is a privileged situation to be in. I’d rather that than be making games that no one took any notice of at all.” It’s great to hear that ethos, and on the back of the superb DmC: Definitive Edition, what are Dom’s hopes for this new version of the game?

Were there any difficulties working with the new hardware?

“For Definitive Edition, and also the PC version of DmC, the technical move onto new platforms was handled by a partner of ours called Q-Loc. Our focus was on improving the gameplay. But I’m pleased to say that any tricky issues have been dealt with very well by our friends at Q-Loc!” Having spoken to a few indie devs on our weekly podcast, it seems that PlayStation Plus has been a real help. Having your game in that promotion seems like you’re giving it away for free, but often it’s the placement that helps create awareness. Have Ninja Theory experienced this (DmC was in on PlayStation Plus on PS3 a while ago)?

“There is an audience of players that skipped DmC the first time around for whatever reason and have subsequently played it as a result of the PlayStation Plus promotion. There isn’t any doubt that PlayStation Plus boosts the awareness of your game. However, I don’t know if this played any part in the decision to make the Definitive Edition – you’d have to ask Capcom on that. Creating Definitive Edition for us was an opportunity to revisit the game and improve it. So it was really a no-brainer.”

As someone who adored DmC (there’s plenty of us out there), I’ve long hoped for a sequel, but it appears that ball is very much in Capcom’s court.

“We’re not working on anything else DmC related nor is anything planned. Devil May Cry is Capcom’s IP, so whether they draw a line under DmC is up to them.” It’s time to get real. It’s time for that question: Where does Dom keep his ketchup?

“Cupboard. If you pick it up from a shelf in the supermarket I don’t see why you wouldn’t keep it on a shelf at home. Eggs being an exception to the rule of course.”

Sticking with the real talk, it’s time for a big question, one that yields a heart-breaking response. If Dom could have Ninja Theory make a game for any existing IP, what would it be?

“Enslaved: Odyssey to the West. Personally, I’d love to revisit that world and story.”

I did tell you it was heart-breaking. Ouch. Anyway, it occurs to me that (of course) the team are also working on Hellblade, which is a new IP. After the reception of most recent new IP, The Order: 1886 was, well, interesting, how do they feel about it right now. Isn’t it much safer to just reboot than create anew? “It is very difficult to create a new IP in the AAA market right now; The sheer number of players that a $60 game has to be sold to in order to be justified means that only the safest of bets will be placed by publishers. Players want more creativity in their games, more genres and more new IP but the reality is that an established IP comes with an audience whereas a new IP has to build one from scratch. New AAA IP has to be backed to a phenomenal level to stand a chance and there aren’t many publishers willing to do that in the current market.

The difference between Hellblade and any AAA development is that we’re attempting to deliver AAA quality but under an independent model. We have a far smaller budget and a far smaller team. But because our costs are lower we don’t have to sell to millions of people to justify the investment. Hellblade needs to sell around 300,000 copies for it to break-even vs the many millions that a $60 retail AAA game needs to sell in order for the development costs alone to be covered. ”

With the YouTube generation seemingly split from more traditional games media, how does Dom feel about the role of the media these days?

Thanks to Dom for his time, and Capcom for arranging this interview.