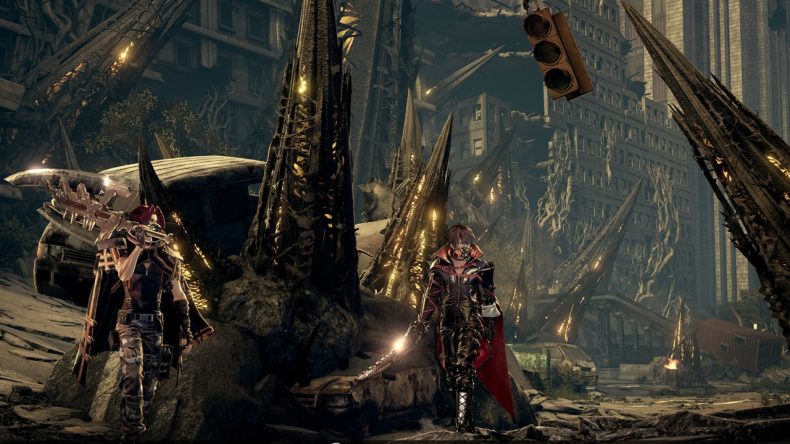 This weekend I got a chance to play Bandai Namco’s new action game Code Vein, thanks to the Technical Test. Essentially a beta, the test offered several hours of action and adventure through the Prologue and a bit of side content designed just for the beta. Initial impressions are very positive. While it will be compared to Dark Souls and Bloodborne by everyone and his gaping dragon (Ed: beg your pardon?!), it’s fair to say that the studio behind it – headed by Hiro Yoshimura, the director of God Eater – wear their influences proudly on their sleeves. Actually “wear” is too light a term: they all but roll up said sleeve and nail their influences to their bare arm with a ruddy great sword.

That being said, they’ve taken pains to ensure that Code Vein has its own identity and, while it undoubtedly borrows several core concepts from the FromSoft playbook, the world and characters feel interesting and fresh. Having spent a good 10 hours in the beta (4 of which were probably in the excellent character creator), there’s 6 reasons Code Vein well and truly has my attention now (none of which relate to the camera angle on the lady in white… because bloody hell, lads, it’s 2019). The world of Code Vein is a dark one. The protagonist and most of the good (and bad) guys are Revenants. That is, they’re dead, and reanimated by a parasitic implant held in check by feeding it “Blood Beads” drawn from special springs. Without regular blood, Revenants become the Lost, essentially mindless killers.

Trapped in a dead city by an otherworldly barrier, the last vestiges of humanity must forage for sources of blood without wiping out what’s left of the actual humans. Beyond this we don’t know an awful lot. Characters in the chunk we played talk about the Queen, who was defeated long ago and whose death created the barrier. The militant force your character works for are known as the Queenslayers, but it appears that early on you’ll separate from the main force and forge your own path.

Being vampires means most of your special skills and spells are drawn from or utilise blood, which makes for a gory and macabre moveset. It’s all very cool and a little bit gross. It’s a crossover of styles you probably weren’t aware you wanted, but the fusion of fast-paced, combo-based combat with parrying, dodging, and punishing difficulty spikes present a weirdly compelling mix. The world design takes cues from FromSoft, too, with routes opening up to make backtracking and re-treading easier, creating a world you’ll kind of instinctively “learn” to navigate better than your own living room in the dark. And, of course, there are “bonfires”.

By now a staple of the Soulslike genre, the eponymous bonfires are here replaced by Mistles, buds of a bizarre world-covering plant that must be awakened in order to bear Blood Beads, the macabre fruit that nourishes the Revenants. With the world of Code Vein stuck in a constant loop of death and rebirth, awakening a Mistle brings all the Lost in the area back to (un)life and allows your character a brief moment of respite.

As we’re becoming accustomed to in this genre, there’s a good chance much of the story will be open to interpretation. As I ran around walloping the zombie-like Lost with my giant axe, I kept picking things up with names that made little sense out of context. How much will be explained is yet to be seen, but I’d keep your wiki open while playing if I were you. 3. It has an accessible learning curve

The beta has a fairly comprehensive tutorial that introduces you to the three primary Blood Codes (or classes), Fighter, Ranger and Caster. The Fighter is fairly straightforward, dealing with direct damage, heavy armour, and massive two-handed weapons. Players of Bloodborne will be instantly at home here, whether wielding a sword, huge axe or a pike (the three weapons I found in the beta, along with a giant hammer which was really just a hunk of concrete on the end of an iron bar).

The Ranger is the agile class, combining quick strikes with a ranged attack and primarily using a bayonet. This is the class I struggled with the most, but it’s the one that may offer the most utility when mastered. And finally the Caster is the mage class, able to draw devastating offensive spells from blood. In all honestly, the Caster felt a little overpowered, but it will all come down to how the game handles resource management and cooldown, etc, to create balance.

A key takeaway is that Code Vein doesn’t feel like you’re thrown into the deep end. While that’s something many Soulslike fans look forward to, allowing you to find your feet with the slightly complex classes and skill design (and there is a lot to understand) isn’t a bad thing. Yes, the opening hour, at least in the beta, feels easier than other games in the genre, but there’s a lot to learn going in. I won’t pretend that new properties are particularly rare, but I will say that every one feels somewhat refreshing as it sluices out on the rushing river of sequels and reboots. Although it bares similarities to God Eater and has an Anime aesthetic that could have been pulled directly from an existing show, Code Vein is brand new.

Developed by the team behind God Eater 3, it looks and feels somewhat familiar, but the environments are more detailed and the combat more considered. How well it’ll do as a fledgling property remains to the seen, but there’s no denying the minds behind it have solid pedigree. 5. The world is potentially massive

The beta barely scratched the surface, and in fact had elements in it made purely for testing purposes. But we saw a glimpse of the potential size of the world. Given that the opening area is a destroyed cityscape held at bay by the dead Queen’s forcefield (we still don’t know what she was Queen of, if she was human, or if she was related in even a passing way to Freddie Mercury), it seems likely that the story will see you traveling beyond the forcefield and into other such biomes in the ruined world.

I only make this assumption because one dilapidated city area is going to become a little stale after 10 or 12 hours, let alone 20 – 40, and there are elements of Code Vein that suggest longevity. For a start you collect materials which will likely be used for crafting at some point, which combined with the interesting take on classes and skills hints at greater depth. Also, the game’s to which it pays homage are hardly short affairs. I could be hella wrong, but I get the sense that Code Vein will be a behemoth of a game. 6. The character creator is next level

Judge me all you want, but I spent hours and hours in the Black Desert character creator. Before that, I lost chunks of time to Skyrim – hell, even Saints Row. Its an essential part of the RPG experience for me and many others, and Code Vein boasts an impressive avatar builder. It might say certain things about me that don’t bear analysis, but I get really itchy and uncomfortable if I stride out to face the forces of evil in pants that don’t match the shade of my warhammer.

I was pleasantly surprised by the sheer number of options for hair and features, the numerous default outfit options (all of which is altered further by equipped gear), and the accessories. The Accessory part is actually very interesting, as you’re given a set amount of points to spend and can then choose from a bevy of accessories including chokers, gloves, hair extensions, belt chains, arm bands, glasses, hats, scarves, backpacks and tattoos.

Yes, I know it’s all cosmetic and largely pointless, but it’s still cool. My hope is that these are unlockable in-game or unlocked from the beginning as they are in the Test version, and aren’t tied to microtransactions. It’s a possibility given the current climate, but we won’t know for sure until launch.

Senior Content Editor Mick has been playing games for over 30 years and writing about them for around 12. After drifting from site to site for a while, settling briefly at the now-defunct Made2Game and freelancing for the gone-but-not-forgotten NintendoGamer Magazine, he came at last to rest at Godisageek. Mick has been a reviewer, staff writer and content editor here for some time, while also moonlighting a little for Red Bull Games. He has 4 kids, has written 2 novels, and sometimes even manages to pay a bill or two. You'll usually find him defending the galaxy in Destiny 2, battling evil in Diablo 3, or lurking in the background on Twitter. Find him there @Jedi_Beats_Tank, or on XBL (JediWaster247), PSN (Jedi_Waster) or Nintendo (JediWaster).
MORE LIKE THIS
code veinNamco Bandai

Code Vein DLC 3 is out now