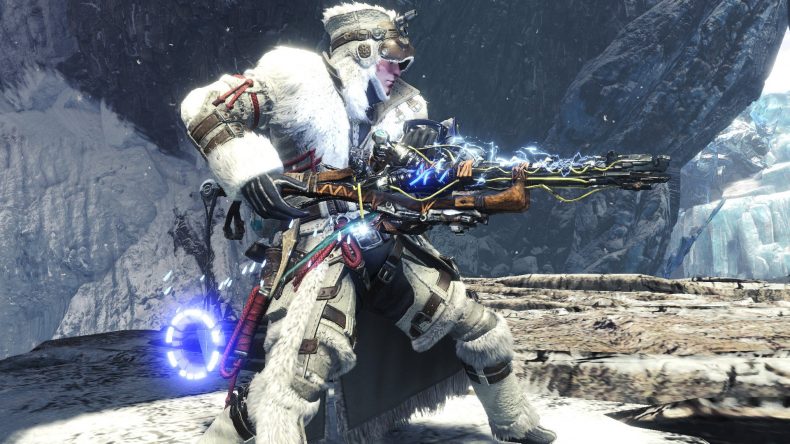 RE: Return of the Bioweapon: This quest (available on PS4 and Xbox One until December 5) takes place in the Rotten Vale and features you (and up to three others) taking on Blackveil Vaal Hazak. You need to be Master Rank 20 or higher to be able to do the quest. This event quest has a nice helping of Resident Evil 2 with music and even items. For this quest, any effuvia resistance you have is useless so forget those decorations and skills. Instead, you enter a zombified state which heals you when your weapon is sheathed over time. The downside is you cannot use any items or evade during this state and your movement is much slower. I’d recommend doing this quest solo just to understand how you end up feeling while playing in a zombified state so you don’t end up carting (dying) when playing with others.

The way to cure this is using a special event item called the Green Herb. You find these all over the place and they are different from the regular herbs you use in Monster Hunter World. You can combine these event items with the rare red herb to maximise your health and heal up. That covers the main mechanics of the quest. There isn’t any special mechanic here like the Resident Evil 2 event quest. Just remember to take on Stun Resist gear and the thunderproof mantle if you have it because Zinogre hits and stuns hard. Zinogre is weak to ice so equip a nice ice weapon if you have one. You don’t need to worry about invasions in this quest which is nice. I recommend carrying a few pitfall traps as well. Avoid using shock traps for obvious reasons. Avoid Zinogre’s projectiles and evading right in time when Zinogre does the jump attacks will make this hunt a breeze.

Completing this event quest will net you a Banuk Warrior Symbol or two. You can use these with other items to craft the Stormslinger Prototype Light Bowgun and the Focus Pendant. The light bowgun isn’t great in its current state and I hope the second part of the collaboration will have something that’s actually usable for endgame. The Focus Pendant looks great though. That covers both of these events. I’ll have a guide for the next Horizon Zero Dawn: The Frozen Wilds collaboration that arrives in December as well.

Monster Hunter World: Iceborne is now available on PS4 and Xbox One. Read our review here.