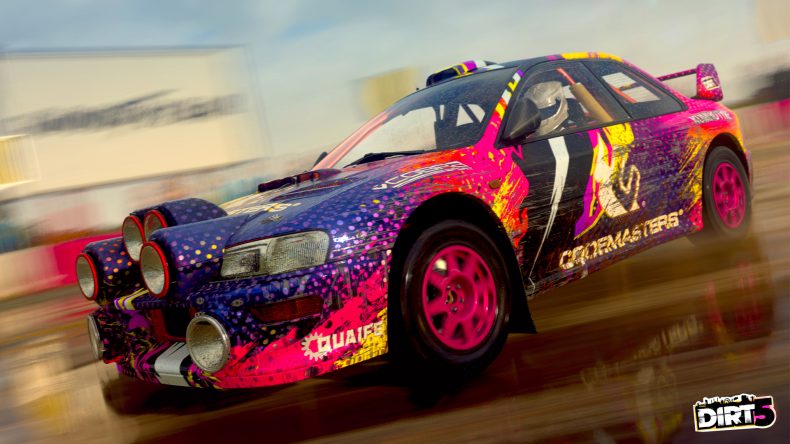 Rally games have come a long way since the likes of Colin McRae Rally and V-Rally hit the PlayStation in the late nineties. They have become dominated by simulations nowadays however, with the WRC and DIRT Rally series vying for the attention of rally fans’ wallets. Codemasters has decided that it’s about time its core DIRT series pulled the handbrake for a hard left turn, moving DIRT 5 in a far more arcade direction than DIRT Rally 2.0.

The result is something quite spectacular to behold. It feels like a strange mashup of Forza Horizon and Motorstorm, especially with its vibrant, festival-like presentation. Races are an astonishingly fast assault on the senses, with dirt, snow, water and dust flying here, there and everywhere. The weather effects just add to this sensory overload, especially when lightning strikes during a night-time blizzard. Everything about DIRT 5 seems to suggest that Codemasters wanted to move in a wildly different direction to its usual output. Even DIRT 3 was more realistic in its approach, despite its brash style. The handling, although not entirely lacking realism, is far more focused on speed and fun, allowing you to throw a Subaru or Mitsubishi Evo around bends far quicker than should be possible.

In this preview build, we were treated to four events, each in a different country and showing off different gameplay styles. Each had its own set of weather patterns and time of day too, allowing us a good taste of what to expect in October’s release.

Norway was the first, and perhaps the most varied, of the four locales. Whether during the cold morning, the snowy afternoon or the night-time blizzard I mentioned earlier, it’s a spectacular sight to behold. Perhaps too spectacular at night however, with visibility of near zero, the snow whipping about in the storm to create a white noise effect against the pitch darkness beyond. Norway also showcased the first event type: Ultra Cross. You may have heard of Rallycross, it was a big part of DIRT Rally 2.0 and even DIRT 4, and it pits a number of competitors against each other on mixed surfaces. Simple as that. Ultra Cross is much the same, except these races aren’t on official circuits. They take place in the countryside, on treacherous terrain. In any weather. It featured the 90s rally stars from Subaru and Mitsubishi, plus the iconic Ford Escort Cosworth, or the bigger “Cross Raid” class if you prefer, and it was great fun throwing each vehicle around the gorgeous Norwegian track.

China showcased both the Cross Raid class and Super Lites, such as the Ariel Atom, in the Stampede race type. Honestly, aside from the terrain being harsher and a bit deeper into nature, there wasn’t much difference between the two race types. In fact, aside from Sprint, which I’ll come to shortly, the events are largely the same. China’s more tropical climate makes for a very different aesthetic as you drive through its muddy tracks, heavy showers pummeling the terrain and turning the dirt into sloppy mush.

Brazil’s Stampede event was another more tropical affair, driving through a rainforest and along the edge of a rather large cliff. Again, another standard race really, but when night falls and your Ariel Atom’s lights have all the power of a glow in the dark toy, the deep parts of the forest are terrifyingly dark. You have to rely on sparse hanging lights, the glow of flares and your memory to ensure that you make it through the night. It’s a real testament to DIRT 5’s lighting effects. The final event in this preview demo was in Arizona, in the Sprint class. These things look like somebody modified a golf cart by welding comically large spoilers to the front and back, then strapping in a ridiculous engine for good measure. The sort of thing you might expect of Clarkson-era Top Gear. The power in these things is awesome, spinning the wheels way beyond traction, keeping you constantly sideways around the dirt oval on which you compete. It requires much more delicate use of the throttle, otherwise you’ll find yourself spinning into barriers. It’s still fun, but only once you’ve spent some time getting used to this very different kind of DIRT 5 event.

DIRT 5 is a strange beast. With its more arcade handling, each car feels quite similar to drive, the only real changes being to their speed and weight. It’s easy to chuck them into corners at speed, using the throttle to bring the back end round for an impressive powerslide. It feels light and fun, closer to Criterion’s racing style than anything you’d expect from Codemasters, and there’s a chance the series’ hardcore fans might not like it. But they aren’t necessarily the target audience for this game.

Much like Forza Motorsport and Forza Horizon, the DIRT series is looking to move in two completely different directions. Hardcore rally fans will want to stick to DIRT Rally, but with DIRT 5, it looks like the numbered games are aiming to reach a far wider audience. One that doesn’t want to faff around with braking distances and finding the right driving assists, but instead wants to simply pick a vehicle and track, before tearing up the scenery.

So yes, rally games have come a long way since those late-nineties PlayStation classics, and it looks like DIRT 5 wants to take them even further afield. Some won’t like it, but if Forza Horizon has proven anything, it’s that a series can go in new directions and still thrive.