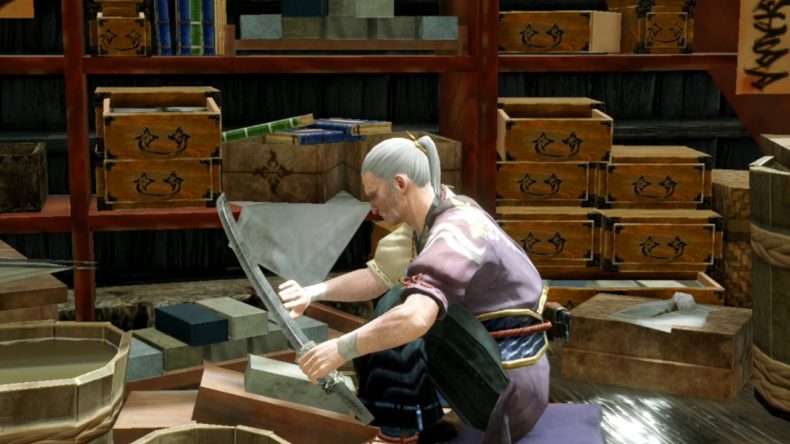 Monster Hunter Rise has a wide array of Skills that you can add to the loadouts of your Hunter. These Skills give you special bonuses whilst you’re out on a hunt. Each piece of armour, Talisman or Decoration (unlocked in High Rank) has certain Skills attributed to it. By wearing different gear with the same skills, you’ll level them up for even better buffs. It can be a bit overwhelming trying to decide which skills to go for, so we’ve pulled together a handy list of the top 10 best Skills in Monster Hunter Rise.

Note: When looking to Forge armour with Blacksmith if you press “Y” you can Sort for a certain Skill by name to see which armour pieces have that Skill assigned to them. This should help you with nabbing the Skills that take your fancy below. 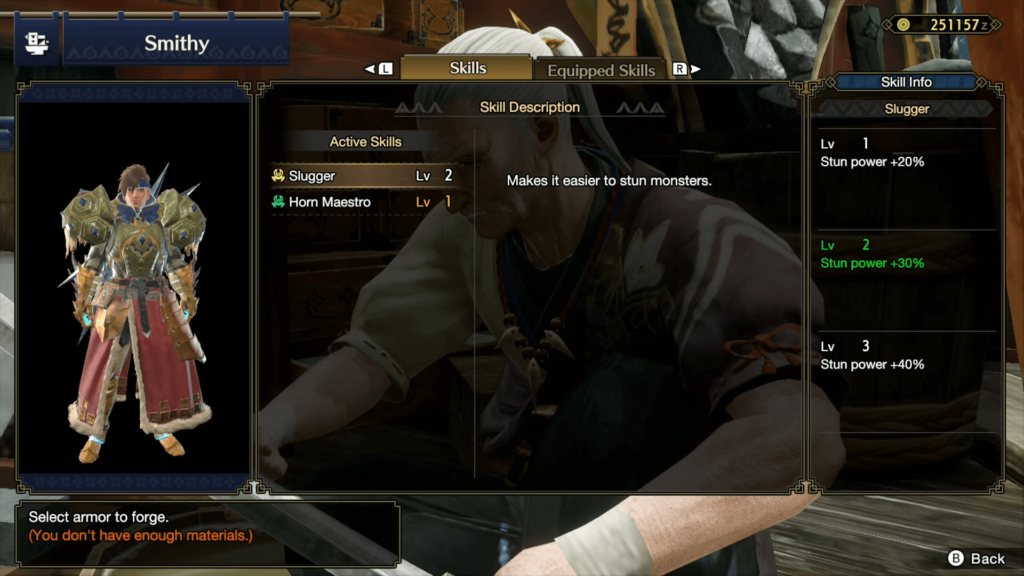 Slugger is always a good choice, given its ability to Stun monsters more effectively. Stunned monsters won’t be able to move which makes them easy prey to deal damage on. Less moving around is also to deal with in the heat of battle. At the maxed out Level 3 you can increase your Stun Power by 40% which is a pretty significant boost. 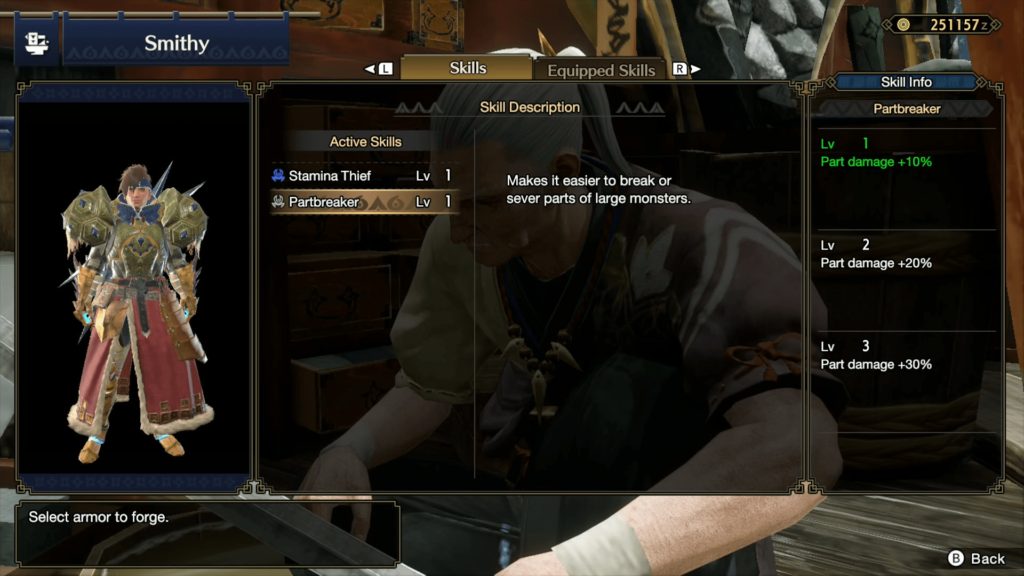 Breaking off monster parts is important as it will give you valuable materials to craft better gear, in addition to those that you receive at the end of a quest. As such Partbreaker is one of the more useful skills in Monster Hunter Rise. When maxed out at Level 3, your part damage is increased by a significant 30%, meaning you’ll see various monster pieces shattering in no time. Make sure to focus your attacks on areas that are breakable when this skill is equipped. Then, when a part is broken move onto another part of the monster to avoid this buff becoming redundant. 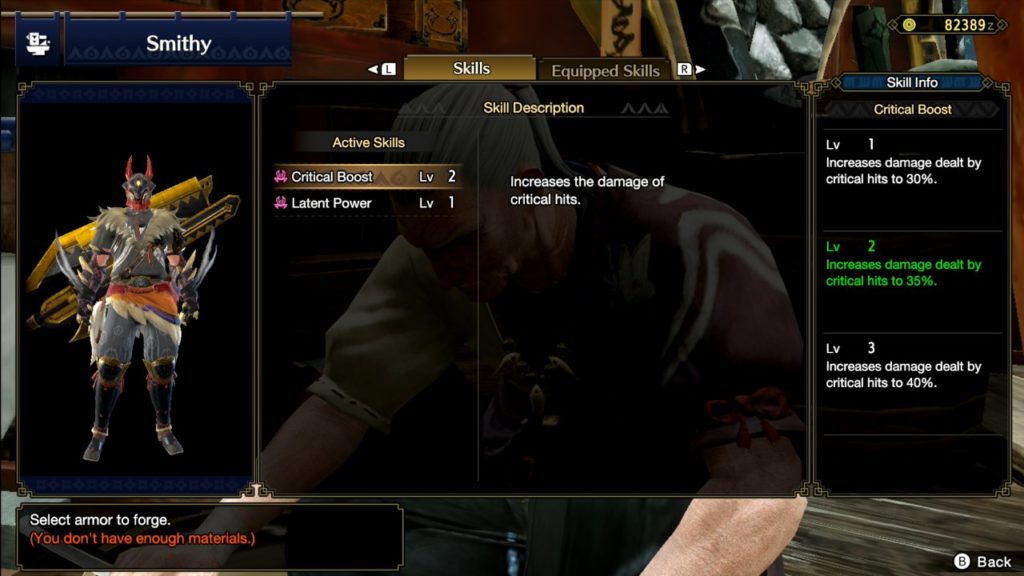 Critical Boost is all about increasing the damage dealt when you deal Critical Hits to monsters. The base increase in damage for Critical Hits is 25%, but this can be increased to up to 40% with a maxed out Critical Boost Skill at Level 3. You’ll know when you land a Critical Hit as you’ll see a large red slash through the damage number as you strike the monster, and unsurprisingly, you’ll deal more damage. This is a particularly useful skill when combined with the Critical Eye skill. 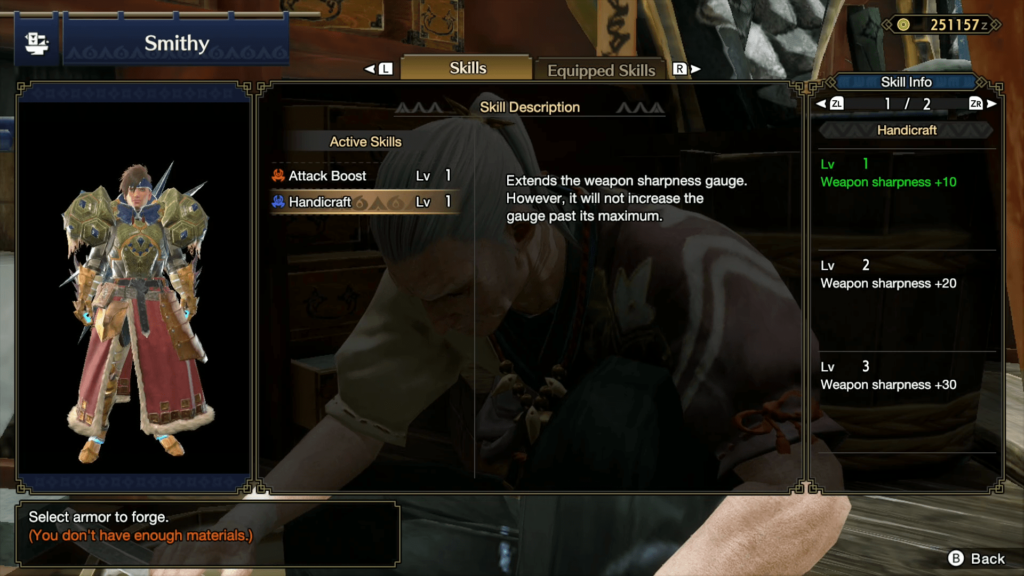 For those hunters who use weapons with a sharpness gauge, such as Dual Blades, then the Handicraft skill can be a really useful one. It extends the weapon sharpness gauge by a set amount, depending on the level of the skill. This can unlock a new sharpness level on weapons you have, or simply extend the sharpness at higher sharpness colours. This means you’ll do more damage, and have to worry less about sharpening in a fight. 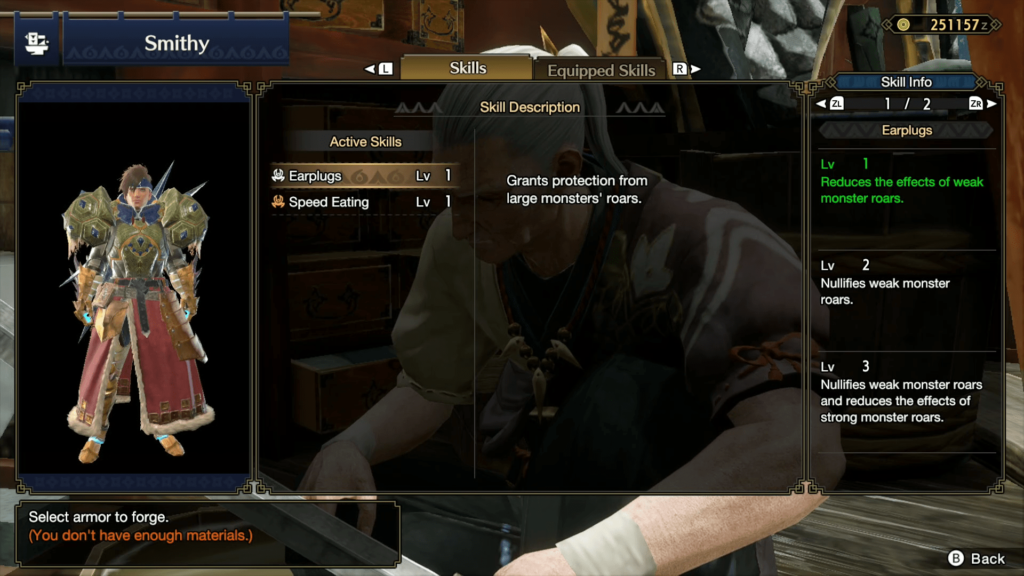 It’s incredibly annoying when a monster roars and your hunter has to cover their ears, halting whatever their attack they were doing. Earplugs is a way to combat this, with each additional level providing additional support against larger and larger monsters. This Skill is particularly important for hunters who choose to use long combos that deal big damage, as often monster roars can cancel these and halt you mid-flow. It’s also worth noting that Earplugs is only really useful at Level 4 upwards, but is really handy at this point. 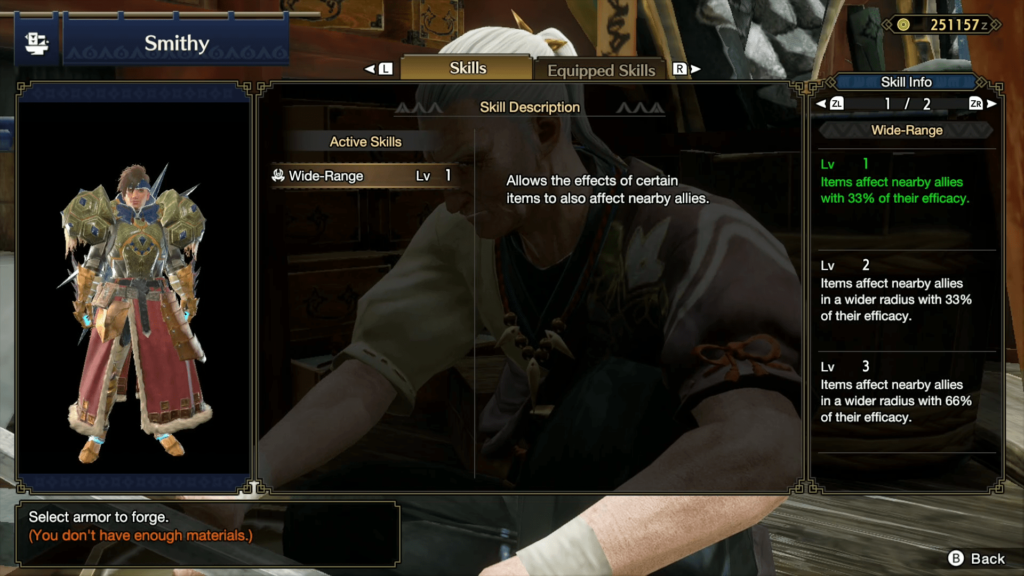 Level 1: Items affect nearby allies with 33% of their efficacy

Level 2: Items affect nearby allies in a wider radius with 33% of their efficacy

Level 3: Items affect nearby allies in a wider radius with 66% of their efficacy

Level 4: Items affect nearby allies in a much wider radius with 66% of their efficacy

Level 5: Items affect nearby allies in a much wider radius with full efficacy

The Wide-Range skill is all about supporting your fellow hunters in battle. With this Skill enabled, certain items that you use will also affect nearby allies, giving them a health boost or dispelling poison, etc. Higher levels of this skill not only increase the area radius so you can help more of your allies but also the efficacy bonus your fellow hunters will receive. This is a solid Skill for those looking to hunt in parties. 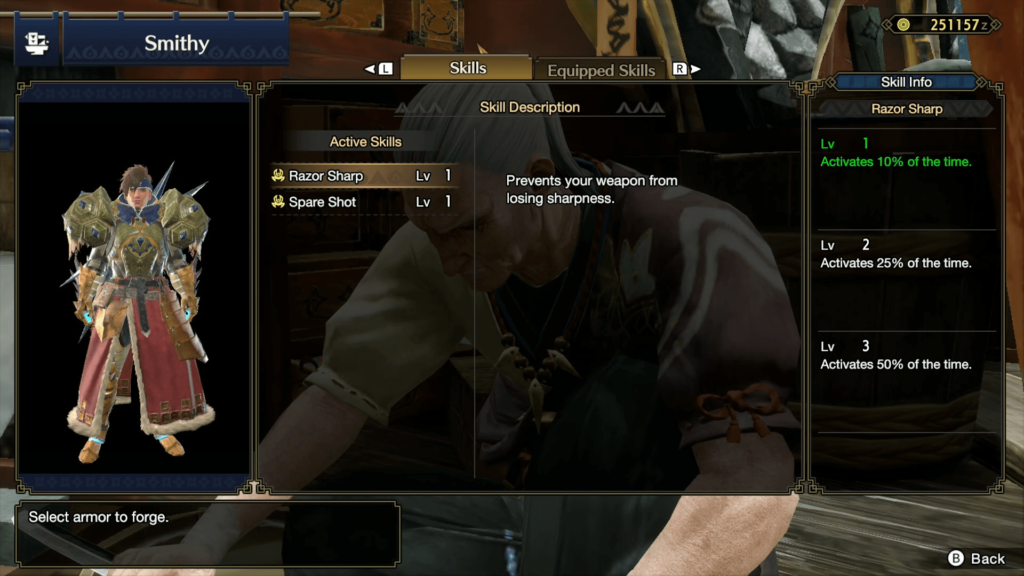 Depending on whether you’re a melee fighter or a ranged one, one of these skills should be vying for a spot in your loadout. Razor Sharp prevents your weapon from losing sharpness up to 50% of the time when maxed out. Alternatively Spare Shot means Bow and Bowgun shots have a chance to not expend coatings or ammo when used, up to 20% of the time when maxed out. As you can see this can be incredibly useful, as it means you can keep fighting without worrying about ammo or weapon sharpness as much, and just concentrate on dealing big damage to the monster in front of you. 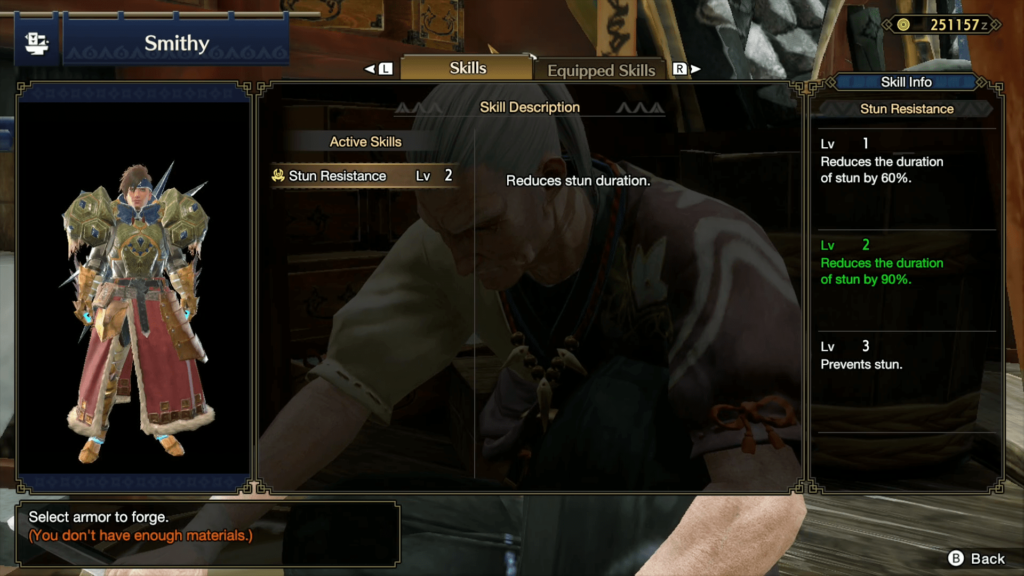 Level 1: Reduces the duration of Stun by 60%

Level 2: Reduces the duration of Stun by 90%

Ah Stun, the cause of so many accidental cartings in Monster Hunter Rise. Getting Stunned as a hunter and being unable to move as a monster comes in and deals deadly damage to you, is perhaps the most infuriating part of the game. And, thanks to the Stun Resistance Skill, it is entirely avoidable and comes highly recommended. At the max Level 3, you will never get stunned, and this is well worth the investment to mean you won’t ever be caught in ta Stun predicament again. 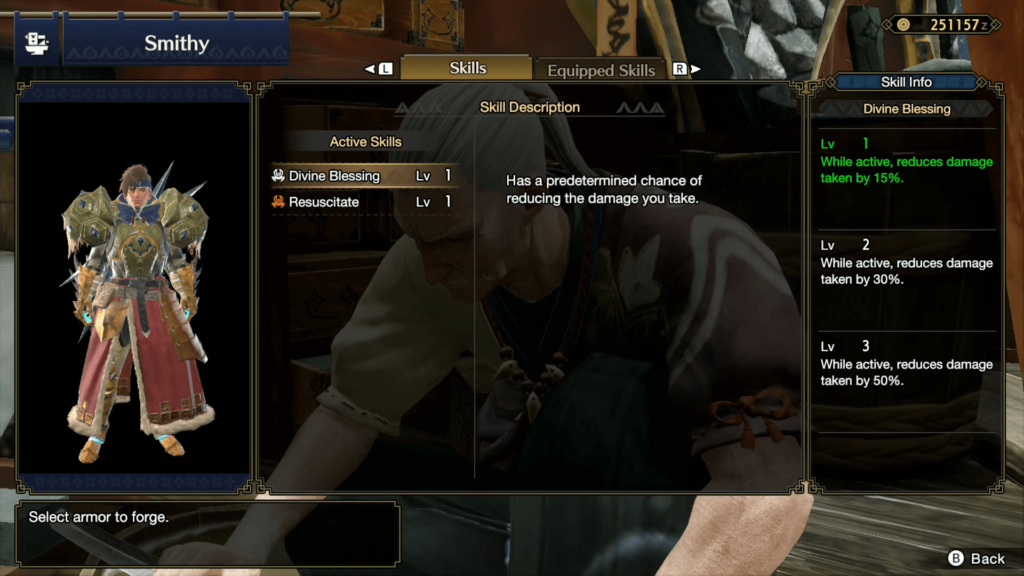 Divine Blessing is handy for those hunters who want to take significantly less damage. When maxed out Divine Blessing has a chance to reduce the damage you take by 50%, which is a significant reduction. You’ll know when it has happened in a fight, because as you take damage you’ll hear a sound, and you’ll see a sparkly effect on the screen. Monster Hunter Rise isn’t explicit with the predetermined chance percentage, but it feels quite high, maybe as high as a 1 in 3 chance to take effect. As such Divine Blessing is one of the best skills in Monster Hunter Rise, and definitely one to consider maxing out in your loadout. 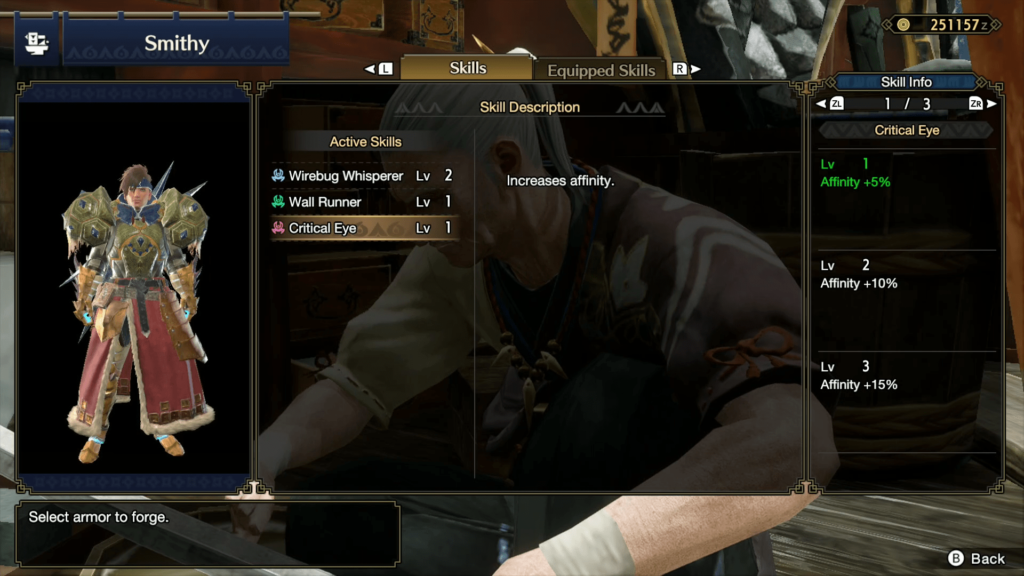 Affinity is the percentage chance of you landing a Critical Hit. Boosting your Affinity makes it more likely you’ll deal extra damage, as a Critical Hit deals 25% more damage than a normal hit (although as discussed, this can be increased with Critical Boost). When maxed out (although admittedly this requires Level 7 of the Skill), then Affinity is increased by 40%. Note that this increase is added to any innate affinity of your weapons. So if your weapon already has a -10% Affinity score, adding 40% will turn then net affinity to 30%. Critical Eye is great for those who want to maximise their damage output potential and should be seriously considered in most skill load-outs.