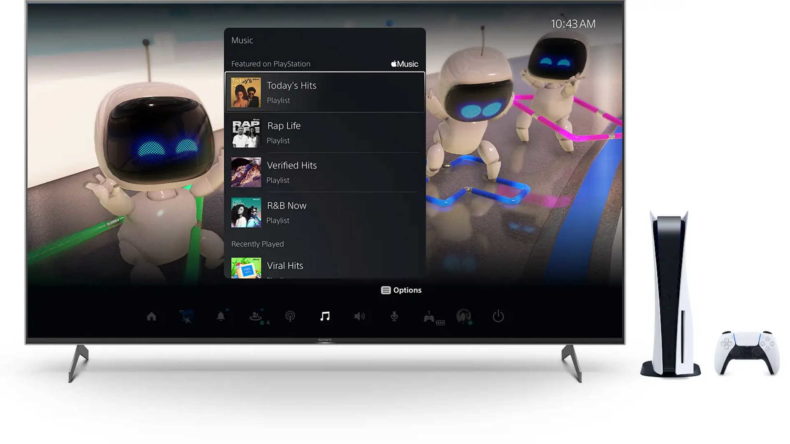 One of the interesting things about new consoles is seeing how frequently they get updated with new features, and the latest to come to PS5 is the ability to play your tunes from Apple Music.

As the major competitor to Spotify, Apple Music offers a similar price and introductory offers, and Apple tells us there are over 90 million songs on the service, and that you can also watch music videos in 4K resolution and even stream Apple Music Radio services via the PS5 now.

You can play music in the background, so if you’ve got one of those games (you know the kind) that is great for zoning out with some music or podcasts while you play, it can be used just like that. If you’ve never used Apple Music before you can get a 3 month trial for free, and there’s also a family version of the subscription available now which will get your iCloud storage, Apple Music, Apple Arcade, and a lot more.

For those wondering about the video features, here’s the official word: “Apple Music subscribers can also find and watch music videos from a wide selection of artists in the Apple Music app. Start by playing the video in full screen; if you decide you want to go back to your gameplay or navigate elsewhere on the PS5’s home screen, the audio from the music video will continue to play. If you want to go back to the music video, it’ll also pick up seamlessly from wherever you are in the song, with no interruption to the music.We hope you enjoy Apple Music on PS5. To get started, PS5 owners can download the Apple Music app from the Media space on PS5, and follow the on-screen instructions to link their Apple Music account”.

Elsewhere, Apple has announced Galaga Wars from Bandai Namco is coming too to Apple Arcade will touch screen controls, while previously announced Crayola Create and Play is out this Friday, and Lego Star Wars Battles is getting an update with Season 2.