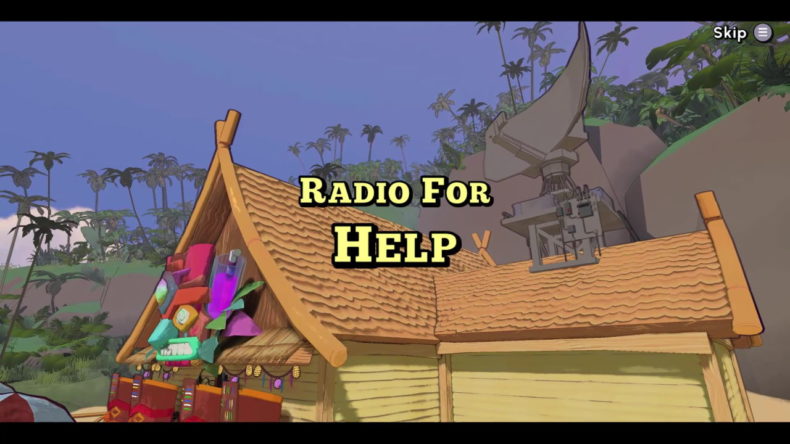 A Juicy Discovery is the second escape room in the Escape Academy DLC Escape from Anti-Escape Island by Coin Crew Games, and here is our walkthrough to help you through every step:

The first thing you’ll want to do is get into the Juice Bar. However, the door is locked. The key is the four totems that stand outside the Juice Bar. You’ll see each of them has various coloured lines on a board on their forehead. One of those lines is a black dotted line. You need to work out the colour of each black dotted line, by following the colour pattern on the board on each totem.

For each totem, left to right, the black lines correspond to the following colours:

Now you need to go to each of the totems and interact with the flame in their mouths. Each interaction will change the colour. Keep changing the colours until the flame matches the colours above, and when they door, the doors to the Juice Bar will open.

Get Your Groove On

Firstly, head on over to the Jukebox. It is to the right as you enter. Interact with it and it will play the following tune:

Now we just need to use this clue to progress. Turn around, and head over to the drumkit on the other side of the room. Interact with each drum to learn that the following coloured drum plays the following notes:

Therefore, combining this with the Jukebox tune, means we need to hit the drums in the following order:

This will cause the central totem to turn around. Inspecting it will allow you to grab the Arcade Tokens.

For the next step of this puzzle, you need to explore and examine the bar area a bit. Firstly you’ll want to examine the bar stools. You’ll notice you can interact with them, and spin around the top and base. Doing so will change whether each bar stool has open or closed eyes, as well as a mouth. You’ll notice there are six bar stools, we just need to figure out what configuration for each one is correct.

Luckily the solution is right in front of us, it just may not be obvious right away. If you look to the left of the bar, you will see a poster on the wall. Inspect it and you will see a group of people enjoying some drinks. You’ll notice, there are six people, and some have their eyes and mouths closed… Yep, we need to match the stools to the poster.

The correct solution, therefore, is, going from left to right:

Now, using this information, replicate the eyes and mouth patterns on the bar stools. Doing so will open up the area behind the bar.

But before we head behind the bar, we’re going to put those Arcade Tokens we won earlier to good use. To the right of the bar, you’ll notice an arcade machine. Use the tokens on it to fire it up. You’ll now get to play the Eruption game. Here you have to make out a picture by spinning tiles around the correct way.

You technically have unlimited time to win the game, but there is a timer in the corner. Every time this runs out, the game will reset three tiles into the incorrect position. But you should still make steady progress. The image is a picture of a woman on a hammock on a beach next to a green mountain. If you are struggling to visualise it, the picture is actually on a poster on the wall of the Juice Bar next to the front door. Jeb is looking at it as you enter.

After you complete the game, it will seem like nothing has happened. However, what you do discover is that someone other than you has been playing this game a lot. Someone by the name of:

Now head behind the bar, until you reach a locked door to the Manager’s Office. There’s a clue on the Post-It Note here that reads

So, we need to enter SAM to get in. So key the following into the keypad to gain access:

And the Manager’s Office will open.

Before we head into the Manager’s Office, we need another item first. To do this, you’re going to make a cocktail known as “The Bighead”. Behind the bar, you should see a poster with the ingredients needed to make it. They are:

You may have seen some of these ingredients already. The Cherry can be found on one of the tables, and the Pineapple is on the front of the bar next to the bar stools. The Banana is right in front of you on a chopping board as you go behind the bar. And finally the milk is in a fridge behind the bar.

Now enter the Manager’s Office and look to the left wall. You will be able to inspect a shelf with four mugs on it. Place The Bighead jug you’ve just acquired into the space on the shelf.

Now you have to rearrange the jugs in order of the speed of their red flashing eyes. You’ll notice a plaque below the shelf depicting a hare and a tortoise. This is telling you which order to put the jugs in. It is, from left to right:

Keep rearranging the jugs until you’ve placed them in this order. When you do so the plaque will open to reveal a Large Key.

Fish for an Answer

There’s another puzzle to tackle in the Manager’s Office, and this is using the Fish Tank. Firstly, you’ll want to observe how many of each fish are in the Fish Tank. A quick look will reveal the following:

However, there’s something else about the fish you need to take note of. Look closely at the fish tank and you will notice that different coloured fish have a different number of stripes on them.

This tells you the order of the colours should be:

With all this information, we can now crack the code below the Fish Tank. For the code we need the right colour and number combination. Combining everything we know, we can ascertain that the correct code is:

Once, you’ve input this, the panel will open and reveal another Large Key.

With 2 Large Keys, you’re going to want to head for the other locked door at the end of the Bar, and use the keys. You’re now in the Radio Room. To your left, you’ll see a White Board with the following Flight Log information on it:

We’re looking for the Escape Jet, so crucially we need to remember 14:36 as a time. Turn to your right to look at the main screen, on the desk in front of you is a Radio Log. Pick it up and Pin it in your inventory. You’ll notice at 14:36, the following information is given:

Now, we’re going to use the Encryption code. Look to your right, and you should see a pinboard on the wall, with various coloured strings all over it. You need to start from the central grey symbol (some vertical lines) and then follow the colours from our encryption code to move along the corresponding strings to get a series of letters.

So this means that:

Leads you to the letters:

We now have everything we need to radio for help. Go to the radio device by all the big screens. Enter the Radio Frequency 450 and then move the levers A, D and E up. Then press the “Call” button.

You’ll then be treated to a small cut-scene.

It was all a trap! But you now need to think quickly to escape. When you can move again, the first thing you’ll want to notice is a clue written on the wall:

Clearly, 50-50-50 is going to be important in a minute. Now look to your left and go to the far wall. You should see a panel that is slightly wonky that you can move to reveal the electronics behind it. You’ll see there are three large numbers on display: 46, 42 and 62. Now the key is making every one of those numbers 50, so we have a 50-50-50 solution.

With the power down, the forcefield has dissipated. You can now access the vent. Move over to it, and use one of your handy Arcade Tokens on it to open it. Crawl through it and you will escape. Congratulations, thanks to our walkthrough you’ve finished A Juicy Discovery in the Escape Academy DLC.

PREVIOUS: TAKE TO THE SKIES