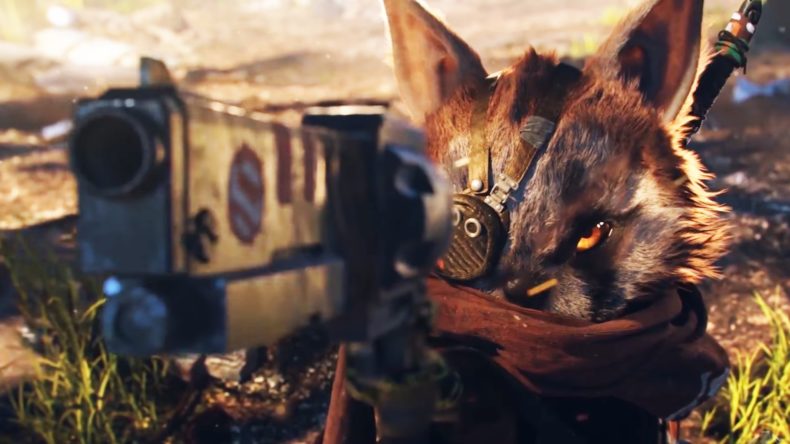 As I ploughed my way through Biomutant and its mass of oddly saccharine content I couldn’t help but equate Experiment 101’s sprawling RPG with a big, colourful piñata. With every firm but light-hearted smack across its papier-mache arse it spewed out more little treats and tidbits and brightly-coloured flashy things, and the more it spewed, the more I hit it, and the more I hit it, the more queasy I became, and yet I found I couldn’t stop ’til I’d beaten it into a shredded pulp and gorged myself on its offerings until the room was spinning.

My point here is that there is a lot of stuff to do in Biomutant. Like, a massive amount, but I hasten to add that I cannot knock the ambition behind Biomutant. Evidently Experiment 101 at some point held a brainstorming session during which someone switched all the waters with high-sugar energy drinks and hid the board rubbers. From the outset you’re populating your map with flashing icons, and you’ll still be finding new stuff after 20 hours.

But if Biomutant is living proof of anything, it’s that there really is such a thing as too much of a muchness. From the moment you open up the character creation screen, it begins hurling silly words and nonsensical terms at you and it rarely stops. Your first task is to create a custom rodent-like hero from a bunch of presets which you can then fine tune with sliders. My little white and blue rat-rabbit only took a few minutes to create, as I was quite happy to sling all my initial points into Vitality and Agility and select the Saboteur class, because dual-wielding makeshift guns and blades sounded cool. 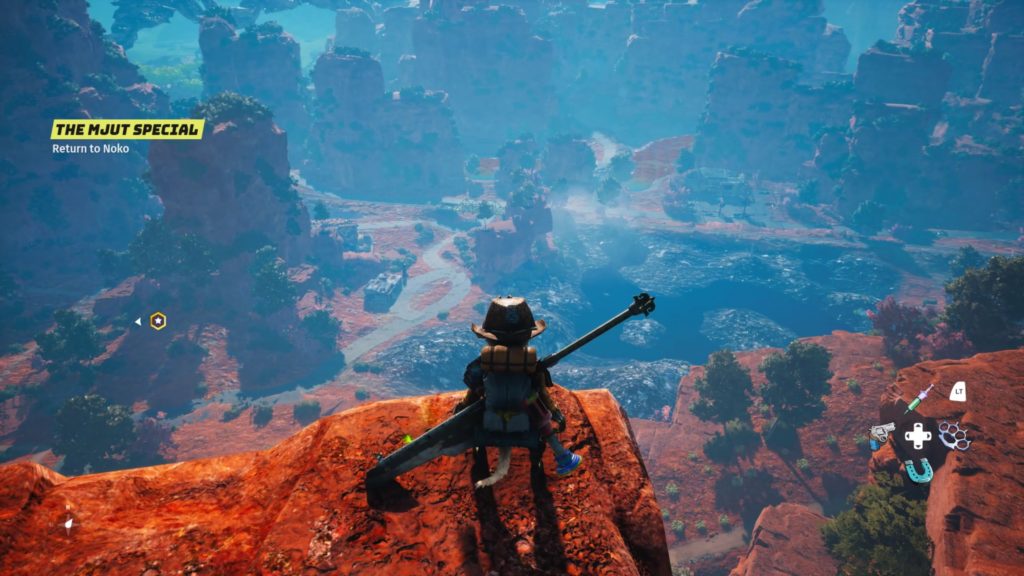 The classes on offer represent the usual RPG fare such as the Commando who does more damage with rifles and the Psi-Freak, who can wield Biomutant’s form of magic like a wizard. Thing is, it doesn’t matter much, because it doesn’t take long to realise that one thing Experiment 101 weren’t interested in was creating a challenge.

Biomutant review: How is the combat

Much noise has been made about Biomutant’s combat being based loosely on the frenetic bloodletting in Devil May Cry, and I can certainly see the similarities there, in the same way I can see the similarities between the driving in Forza and the driving in Crash Team Racing. Because while Biomutant’s combat definitely looks great in trailers, in practice it’s a little less impressive. 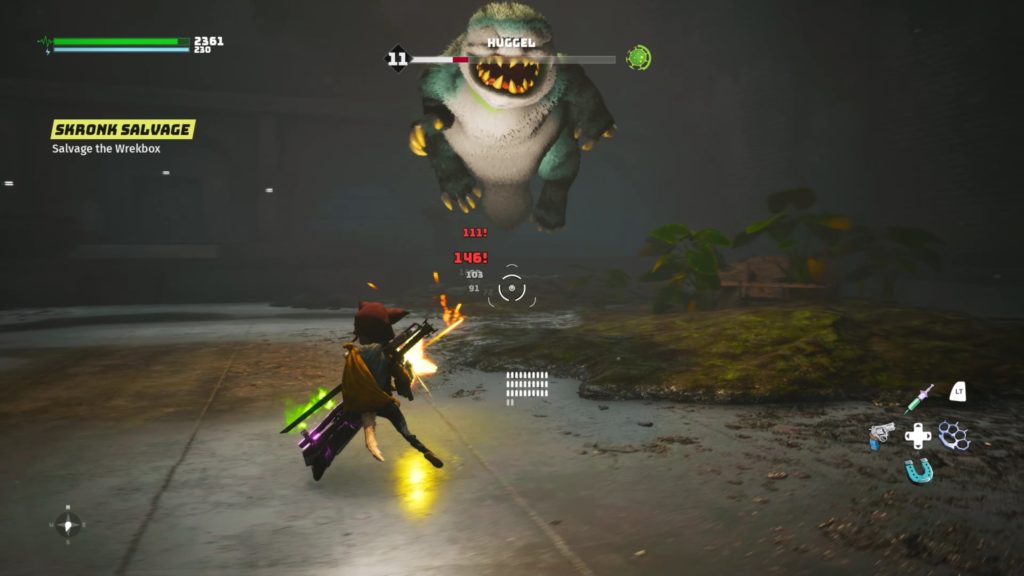 It’s nice to be cartwheeling around bad guys and seamlessly mixing melee and ranged combat, but it’s nicer when you can feel the impact of each blow and sadly, Biomutant just doesn’t deliver punchy, exciting combat. Yes, you can flip about the place and employ a form of magic, and yes there’s more slow motion action than Zack Snyder filming a fight between two OAPs in a vat of treacle, but there’s rarely anything to force you to use your entire arsenal. The free-class system allows you to pump points into whichever stat you like, and so by around 10 hours in I’d ditched the dual blades for a whacking great sword that poisoned my enemies, and a rifle that I haven’t had to swap out for the 25 hours since equipping it.

Living for the loot

There’s an argument here that things are only as fun as you make them, and I suppose you could throw caution to the wind and wade in with your dukes up, but there’s absolutely no penalty for circle-strafing every single enemy while shooting them until they catapult off in slow motion. You’ll rarely take a solid hit, let alone die. A lack of weight to the melee combat leaves the experience looking pretty but feeling hollow, and despite trying to engage with it in a meaningful way on multiple occasions I struggled to see any encounter as more than an obstacle between me and Biomutant’s beautiful, loot-filled world. 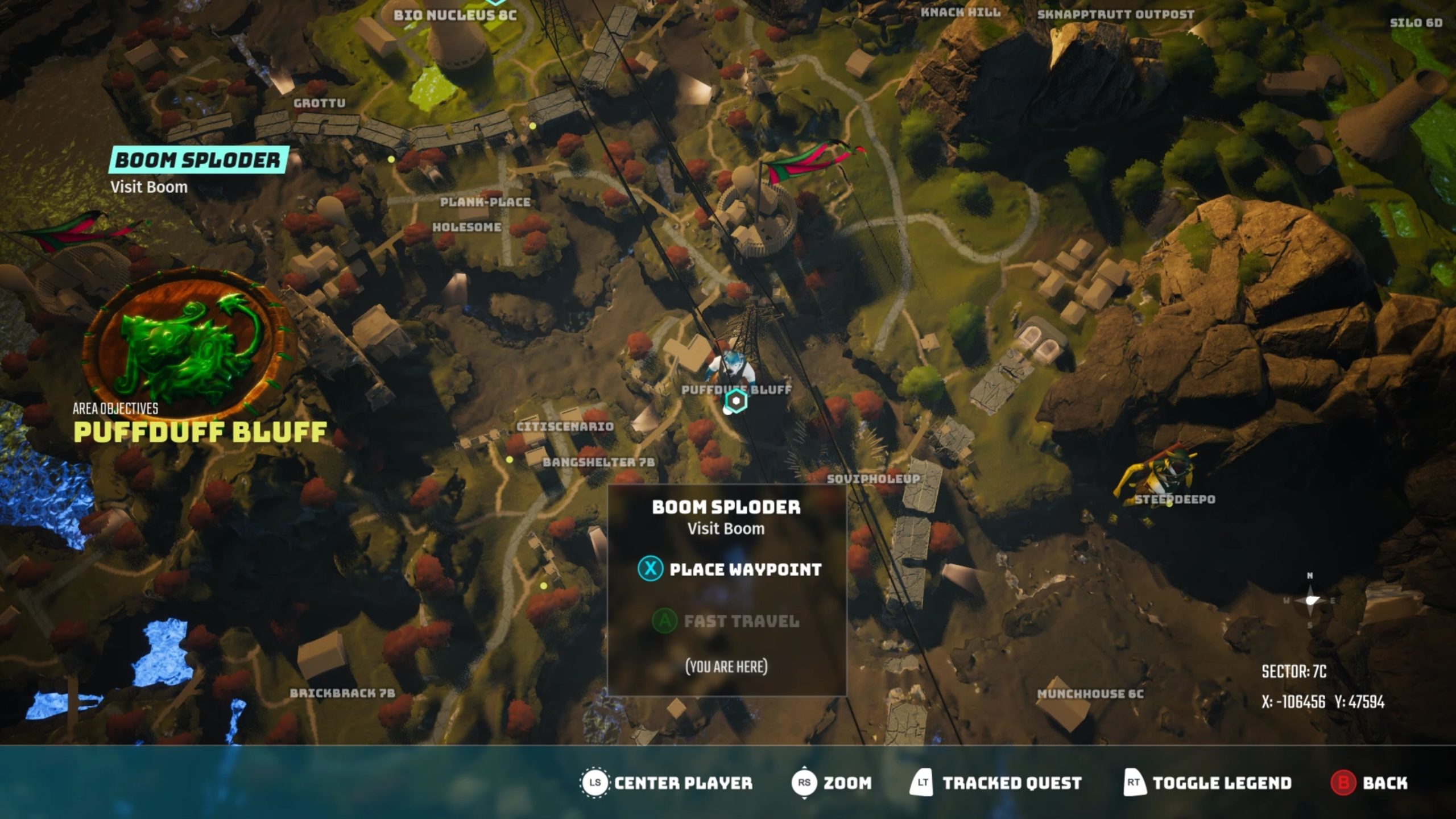 Rarely outside a Ubisoft sandbox have I seen a map so densely packed with places to explore and secrets to uncover. You can’t run for more than 30 seconds in any direction without coming upon another abandoned intersection, dilapidated house, underground bunker or secret vault. A little checklist accompanies each new area, helpfully marking off anything you find until you’re told the area is complete and you know there’s nothing else to search for. A chirpy little automaton is an ever-present companion, ready to fight beside you (sort of), and narrate everything in the voice of a kindly uncle. At least I think it’s the automaton who’s supposed to be talking.

What the hell is a Farty Snagglefloss?

In fact there’s a lot of Biomutant I still don’t fully understand. Set in a world that has survived an environmental apocalypse courtesy of the Toxanol Corporation, whose disregard for the planet’s health led to the end of civilisation, Biomutant presents a fairly dark story that often feels at odds with its attempts at humour and levity. The narrator, for example, rarely shuts up, and even translates the grunts and whistles of the NPCs you’ll meet, while character and enemy names run the gamut from harmlessly weird to downright unpronounceable, which in turn makes them thoroughly forgettable. Not a good thing in a game that gives you so, so much to think about. 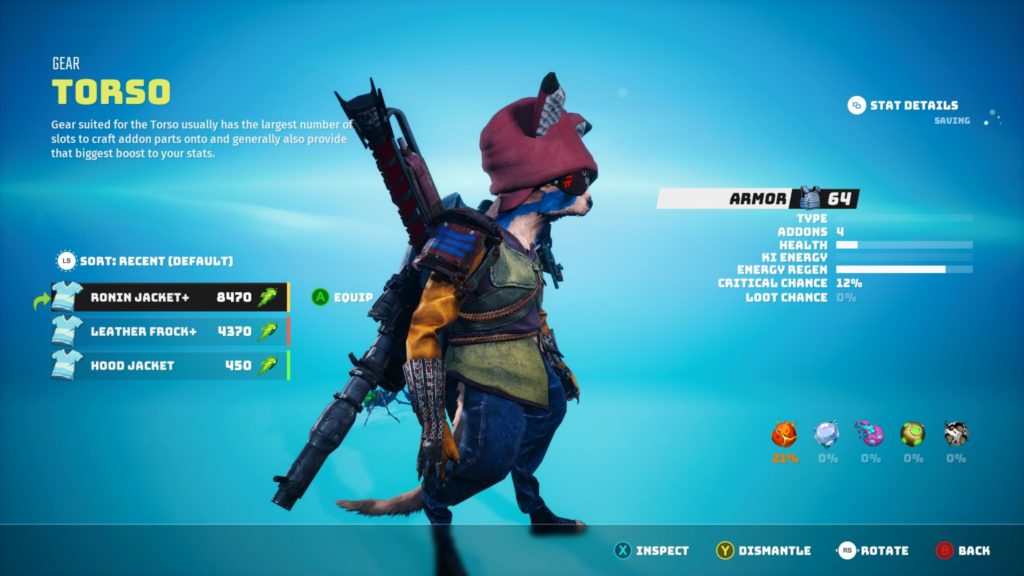 The world is split into separate biomes, each controlled by one of six warring tribes. Initially you’ll be asked to choose one of two sides to work with, and will wage war upon the other. You can choose to be ruthless or merciful, which will affect your Aura and decide whether you – and, by extension, the world – leans towards light or dark. This affects various things, such as which NPCs will give you side quests, which monsters you’ll encounter frequently and which characters will accept a seat on the Ark. The Ark, by the way, is a ship ready to carry you away from the world if your attempts to save it fall to ruin.

The similarities between Biomutant and Breath of the Wild are evident almost immediately. You have a glider, for instance, and must find specific hazard protection suits to survive in hostile areas. But an even greater similarity is the structure of the campaign. This sees you tackling four huge bosses in different corners of the map in order to remove the corruption from the world. This and the tribal war are the main driving factors behind Biomutant’s slightly disjointed story. 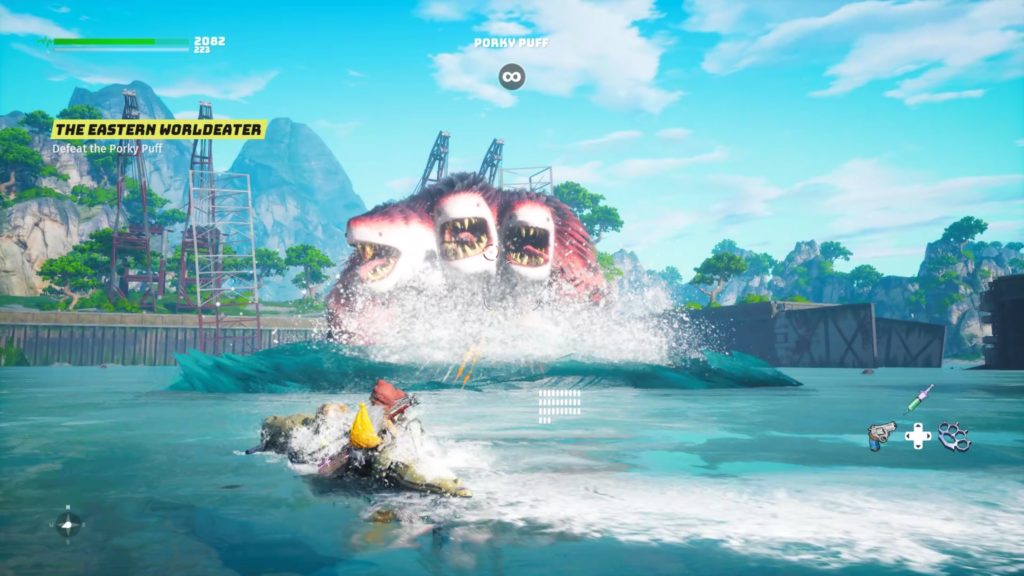 This leads to you repairing and manning various vehicles such as a mech and a submarine to do battle with the World-Eaters. Even these campaign elements are too easily beaten, however, boiling down to fetch quests and short fights. Only one gave me any trouble and that was more down to iffy design than real difficulty. And sometimes merely suggesting that the leader of a rival Outpost simply not fight you. This works far too often and too easily.

I had more fun exploring the world and playing with loot than I did tackling the story. The crafting in Biomutant is pretty cool. While you can collect armour (and there’s so much of it) for each part of your body, including a backpack and face mask to wear as well as your helmet or hat, you won’t find half as many weapons. Instead you’ll find parts everywhere that you can use, on the fly, to make new gear from scratch. It’s an excellent system, but while there are outfit slots for quick-changing your armour and clothing, it would have been handy to have a similar system to switch weapon compositions on the move – especially as you spend so much time in the saddle of something or other as you explore. 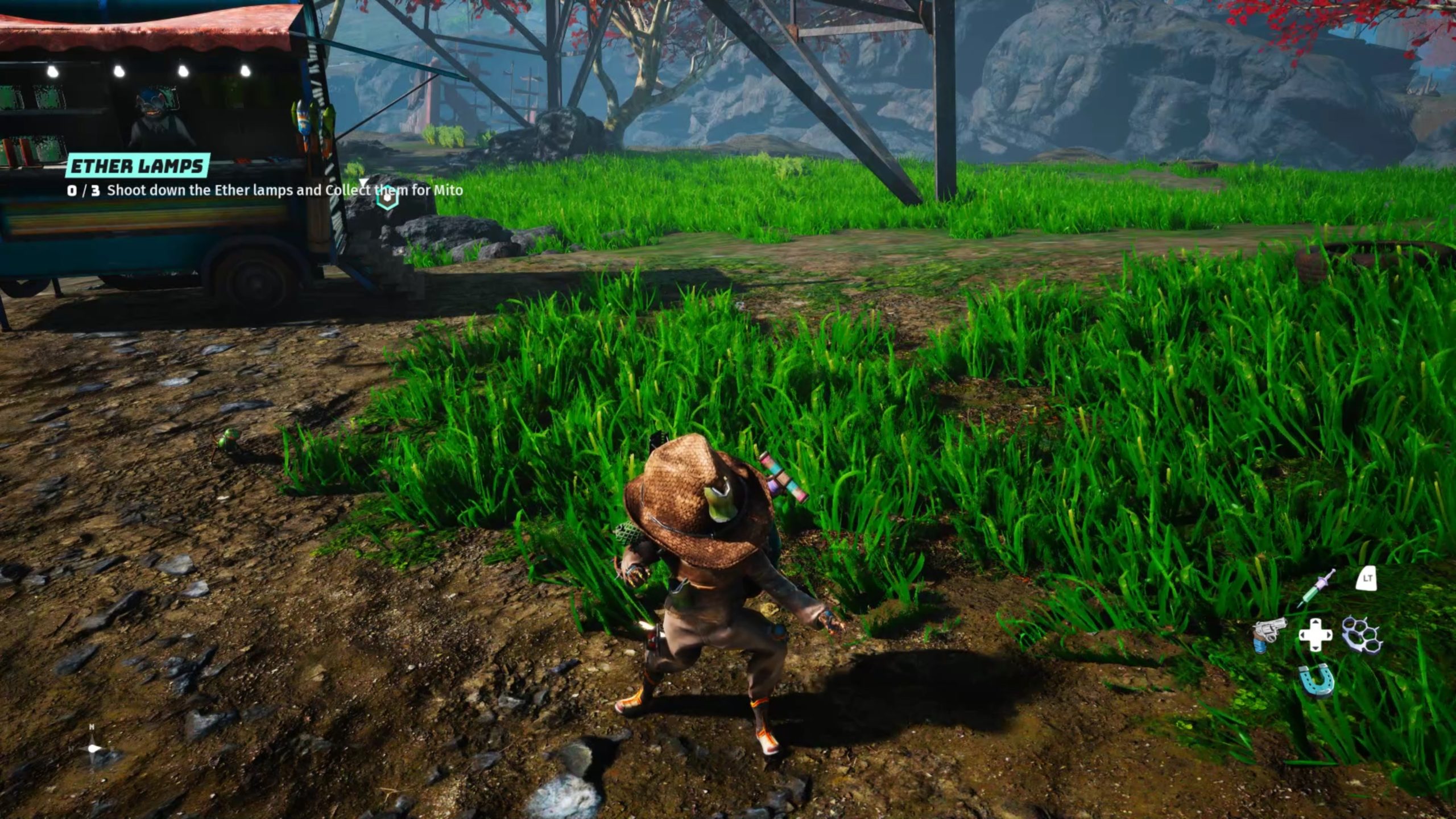 There are gorgeous, colourful meadows, scorching deserts, frozen wastelands, and dense jungles on offer here. Biomutant’s world is vibrant, bustling and full to bursting. Settlements dotted here and there present new side quests, vendors and upgrade stations for your gear. Hidden caverns go deep underground and hide precious loot for your furry little fingers. An impressive draw distance grants you glimpses of far-off treasure troves that you’ll glide, ride, fly or swim to, and a huge variety of weird and wonderful monsters lurks in the shadows. Oh, and it’s not often a game offers you a huge mechanical hand as a mount, complete with a powerful finger-cannon, so there’s that.

It’s quite easy to get around the world using fast travel points, which you pee on to activate, because why not? The spacing is sometimes a little odd, given that some are so close you can see one from the other. Elsewhere, some are so far apart you’re desperate to find one by the time you do. But you will zip around the map awful lot, mostly on fairly mundane fetch quests, or to tick things off the long, long side-quest checklist. Most old-world gadgets you can find such as telephones, TVs, and computers will require you to solve a fairly rudimentary puzzle. There are a few different types, but they’re all super simple to overcome. Ancient gym equipment, on the other hand, will improve your physical attributes after a brief bout of button mashing. 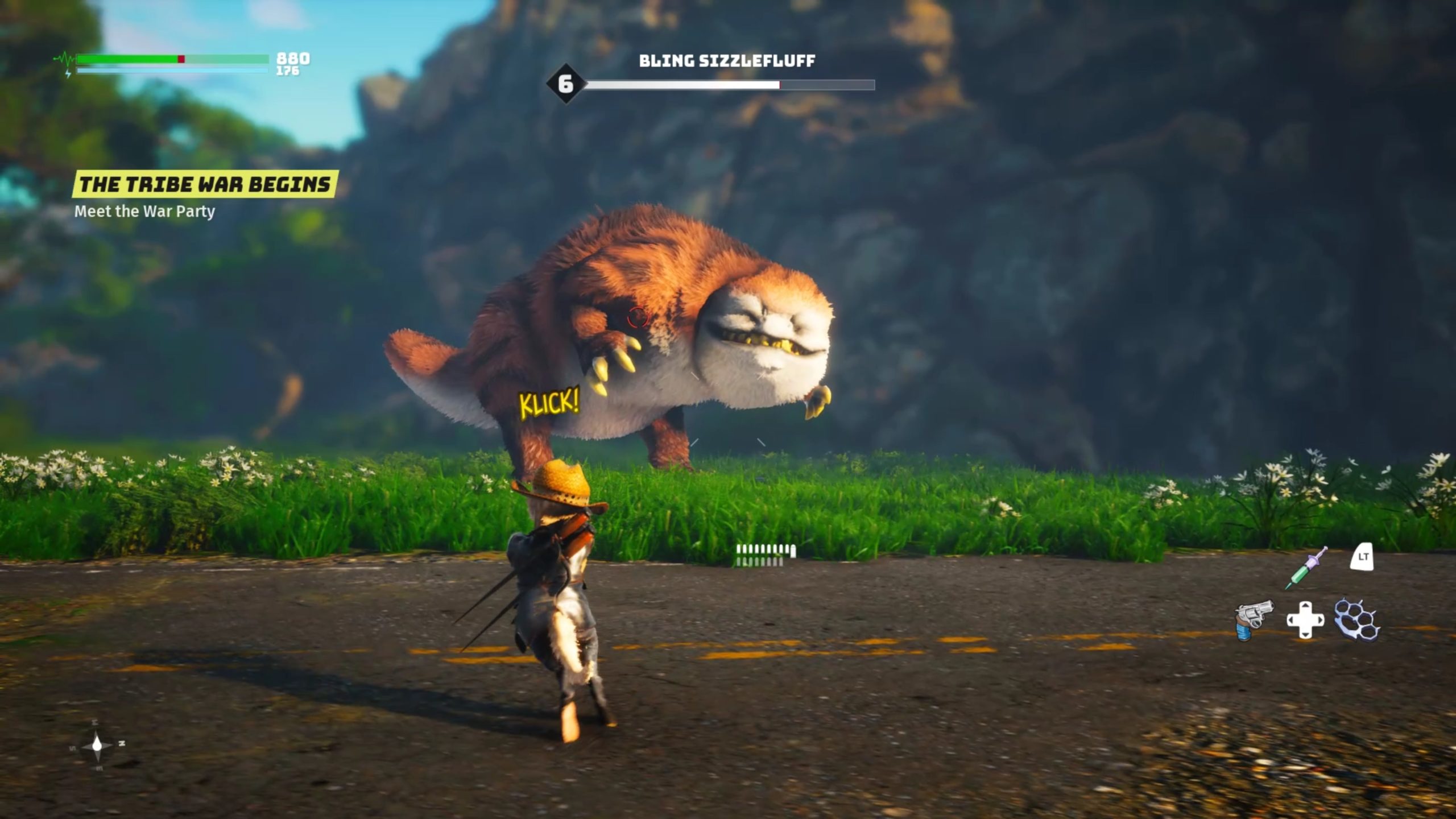 Biomutant doesn’t really do anything wrong, in that it accomplishes most of what it sets out to do. As an open-world RPG it may be a little too easy for genre veterans, and as a looter it certainly showers you with a ton of the stuff in a huge array of rarities. But it does struggle in the two areas that arguably matter most: combat and story. The world itself is great to explore, peppered with things to find and people to meet – but there’s almost too much of it at times.

It’s also worth noting that even though I played on PC, Biomutant hasn’t been fully optimised for “next-gen” yet. This means the load times between areas or deaths are pretty long. I also encountered noticeable slow down after loading into an area, and occasional drops in frame rate. Usually these issues cleared up fairly quickly, but they’re worth a mention.

If you’re going to be guilty of anything, then “too much ambition” is hardly a negative. Biomutant is a genuinely enjoyable adventure that suffers primarily from being too stuffed-to-the-gills and a little bit tonally pendulous. The combat isn’t “bad”, but it misses the mark where it counts. The laboured, none-too-original story is balanced out by the inventive world. Whether Biomutant clicks with you or not, the simple truth is that, although you may well feel a pang of the familiar now and then, you’ve almost certainly never played anything like it.

Looks gorgeous
Superb crafting
Lots to see and do

Biomutant is a game that overreaches early, and spends the rest of its run time trying, mostly successfully, to regain its balance. It's lovely to look at and its world is a joy to explore, boots on the ground, but the combat lacks impact and precision, and technical issues mar the experience.

Biomutant coming to PS5 and Xbox Series S|X in September