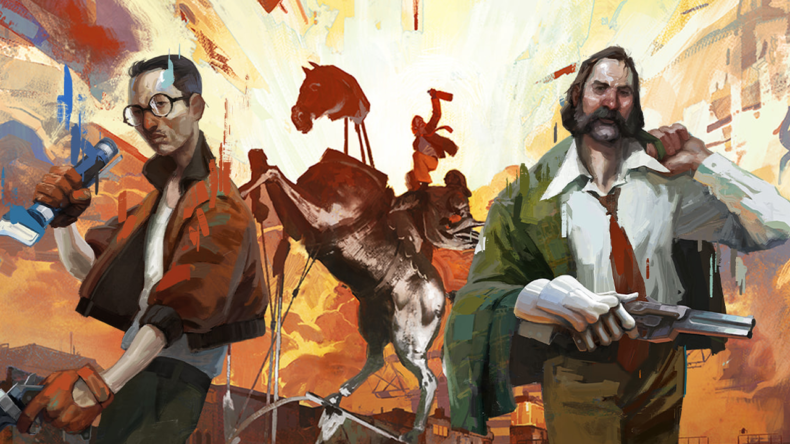 I don’t think I’ve ever played a game quite like Disco Elysium: The Final Cut. I’ve spent plenty of time with CRPGs, point and clicks, detective noirs, and visual novels in my years, four genres which make up the crumbly base upon which Disco Elysium sets its wobbly, messy layer cake – but I don’t think I’ve ever been surprised so repeatedly and so wilfully than I have by this game.

I see wilfully because of how I approached DE. Where as I play most games with the desire to best them, whether that’s through obliterating the final boss or solving the final mystery, with Disco Elysium I felt differently. I didn’t want to save-scum my way through important choices. I wanted to strive to be the very best fucked-up, broken down mess of a detective I could possibly be, but I wanted my failures to mean as much as my successes. And granted, that led to a death or two, a slapped face or three, and a few crushing dead ends that left me scratching my head a while. But the mistakes were mine to make and felt as organic and intrinsic as the times I made the right call instead.

Disco Elysium: The Final Cut – An RPG unlike any other

Set in a somewhat bizarre, kind of retro-futurist alternate reality, Disco Elysium sees your nameless (at the time) protagonist wake from a drunken stupor after the mother of all benders, with a hangover to trouble a Greek god, and find himself with the thankless task of solving a recent grizzly murder that happened just outside. Partnered with by-the-book cop, Kim Kitsuragi, you’re given the dual objective of solving the murder and deciphering your own identity. You’ll also need to find your kissing badge and piece together the events of the last few days, and possibly make amends for some of them. 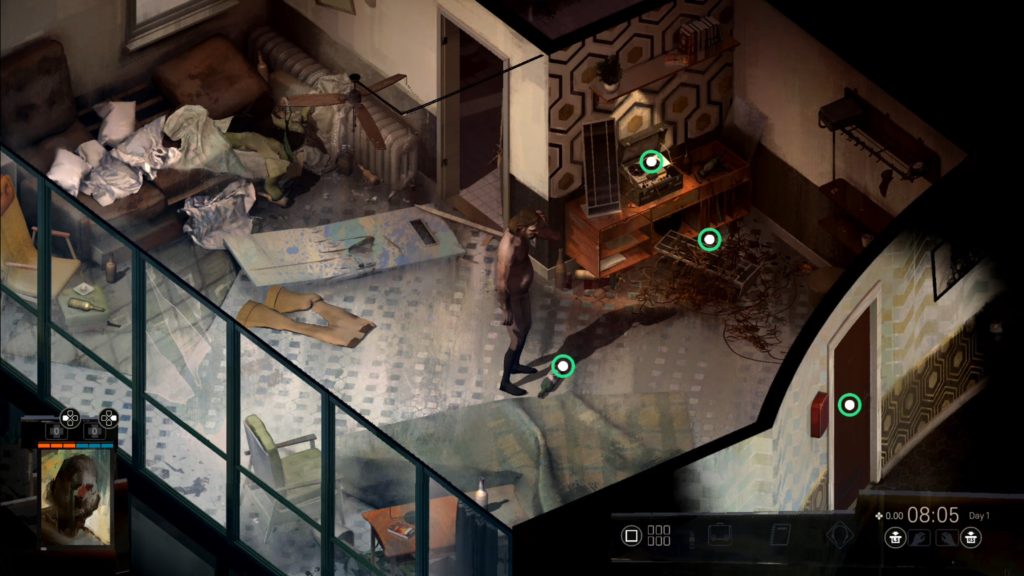 There are two primary ingredients that make Disco Elysium stand out even among the best of its genre: the incredible writing, and the unbelievably deep RPG element. Either alone might have been enough to win it more than its share of laurels, but the combination of the two creates an experience that is quite literally in a league of its own.

If played in what can only be termed “default” mode, your detective is a pretty unsavoury swine. You wake up minus your clothes or memory, with a broken window, a new partner and a body hanging in a tree behind the motel and bar you’re staying in, and from then every event, action, conversation, even thought, that your protagonist has directly influences his personality. You’ll build a template from a dizzying array of traits and grow from there. If you fancy being a bit of a physical brute, you might put points into Physical Strength. Or maybe Perception, if you intend to actually spot some clues. Inland Empire is a great skill that helps you I analyse your dreams and nightmares and internalise thoughts to deepen your understanding of the world.

Be who you want to be – sort of

These stats and the associated choices lead to a deep and ever-surprising experience that will rarely be the same in a second playthrough. Some avenues only open up because you failed a skill-check, others because you chose to ask a certain question a certain way. Improving your stats will directly affect these skill-checks, and so depending on what you’re chosen to boost and when, the game can play out very differently. 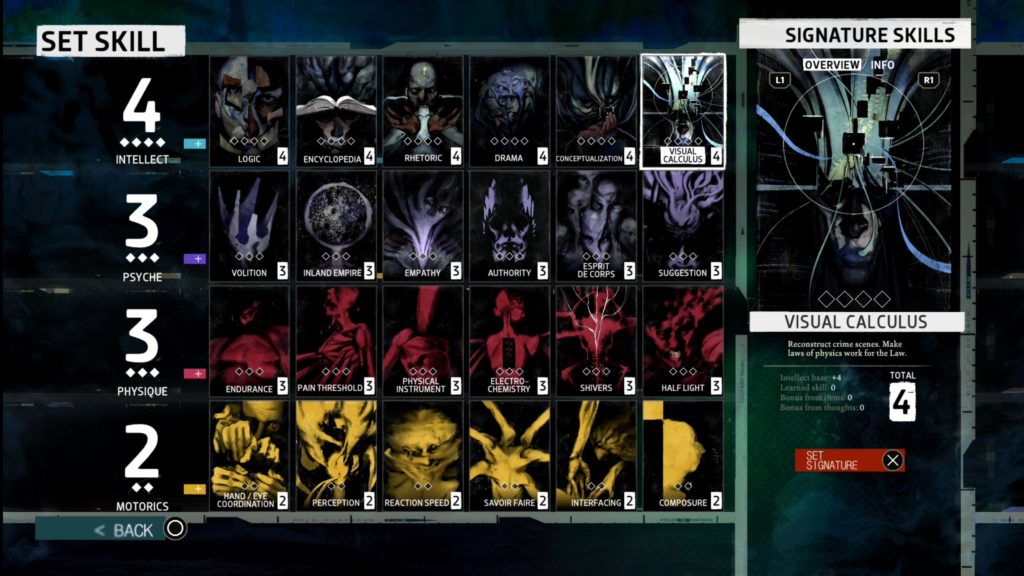 As you level up and improve your existing skills, you’ll slowly mould your “hero” into whatever you want him to be. You can remain a drunken, drug-addled joke of a man, become a self-proclaimed superstar, a self-aware try-hard, or perhaps even the true hero you know is buried under layers of alcohol and psychosis. However you choose to play, Disco Elysium throws choice after choice your way, some stark and binary, some much more subtle and understated. To call it clever would be to do it a great disservice – it’s borderline genius at times.

It swings heavily into political theory, given that the city in which you wake – a somewhat fantastical version of Paris – is in the grip of a workers strike, with parties on both sides throwing barbs and fists and occasionally lynching one another, but the rich world it conjures is deeper than that. Not everyone cares or even talks about the strike. The NPCs you encounter have their own issues and opinions, some of which you can help or hinder in your quest for redemption, absolution, or a quiet place to get smashed.

It leans on social and political themes in places, but this is as much a study of real-world socio-politics as it is of real-world police work, shown as it is under a grimy light and through a muddy lens, the fractured city more a reflection of your broken, rotting hero than of anything in real life. Collecting discarded bottles for the recycler so you can save enough money to pay your bill at the motel is as important as solving an actual murder mystery, though how much emphasis you wish to place on individual tasks is up to you. 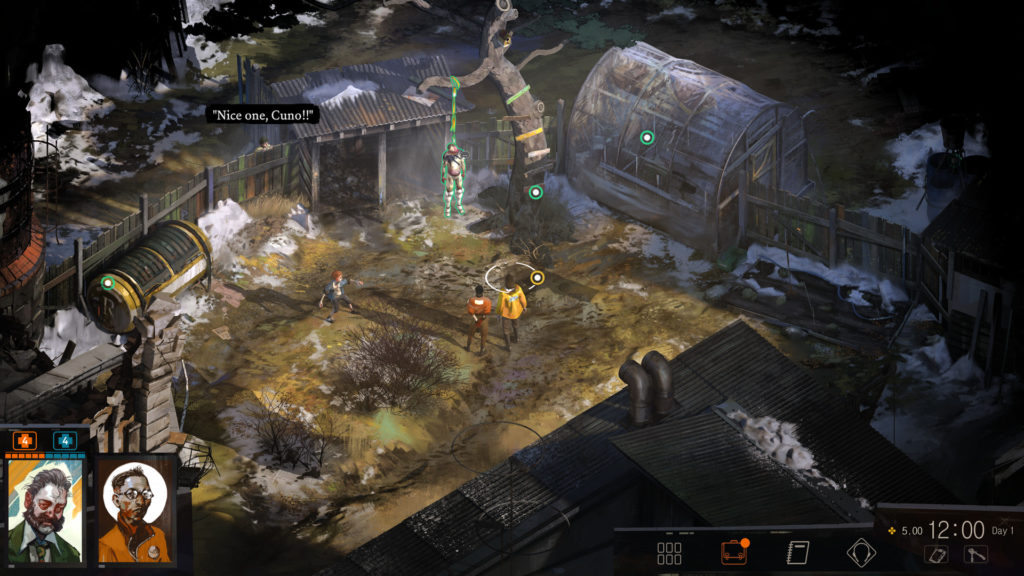 Some are more important than others, some can be retried if you mess them up, others still can only be actioned at certain times of certain days, but the weird time progression mechanic (time only passes when you’re talking, not when you’re walking) means you can manipulate the time of day if you’re clever.

From zero to zero

Disco Elysium: The Final Cut’s real beauty is in the writing, though. There is so much dialogue and flavour text here, and almost every line is a gem. Your character will persistently tangle with his own inner demons (and sometimes inanimate objects), as they try to guide him or goad him throughout. Internalising thoughts is a way to gain a greater understanding of themes and factions in the game world, whereby your store thoughts in your “thought cabinet” (“mind palace” would be far too grandiose) and slowly broaden your horizons, opening up new dialogue options and actions.

The PS5 version runs pretty much the same as the PC version did, with bugs ironed out but still suffering from very occasional slow down. It looks beautiful though, and the water-colour-esque art style is as unique a treat for your eyes as the understated soundtrack is for your ears. The voice acting is also exceptionally good, adding to the overall high quality of the presentation. It can be slow and clunky, and some simply will not click with its pacing or its – for want of a better word – cerebral focus. But those who do will find a CRPG here that is quite simply like nothing else in the medium. If you missed it on PC, it’s absolutely worth picking it up on console and investing some time and effort in its wonderfully complex world.

Disco Elysium: The Final Cut is quite simply like nothing else in the medium. If you missed it on PC, it’s absolutely worth picking it up on console and investing some time and effort in its wonderfully complex world.