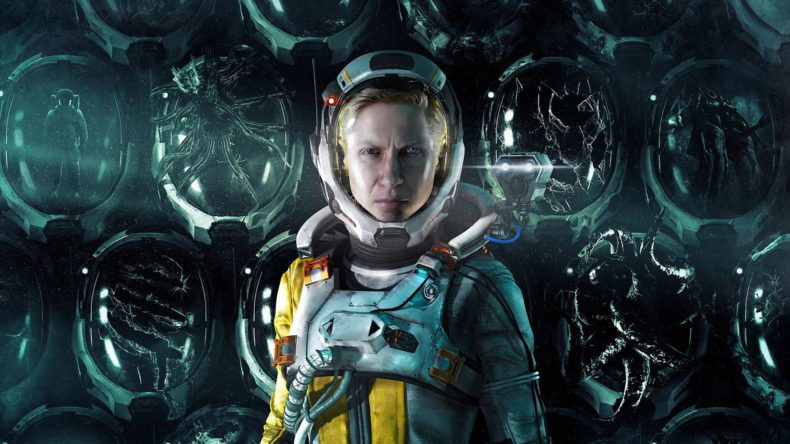 You know every time you’ve played an indie game and thought, “Wow, I wonder what these folks could do with a triple-A budget…”? Well, Returnal is the answer to that question. It’s a hyperactive bullet hell shoot-em-up that’s also a third person Metroidvania that’s also a sci-fi roguelike action horror. It might also be the best game I’ve played this year.

Now granted, there hasn’t been a huge amount of releases so far. In fact, you can probably count on one hand the number of triple-A games we’ve seen in the first quarter-and-a-bit of 2021, but something about Returnal tells me I’ll still be saying that by the end of the year.

I admit that I went in not knowing what to expect. Sony haven’t done the best job explaining exactly what Returnal actually is. The trailers are cool, dark and moody, but they don’t convey just how atmospheric this game is from the moment you start. As I said in my preview, Returnal doesn’t mess around dropping you right into the action, and once you’re there, it simply doesn’t let up. 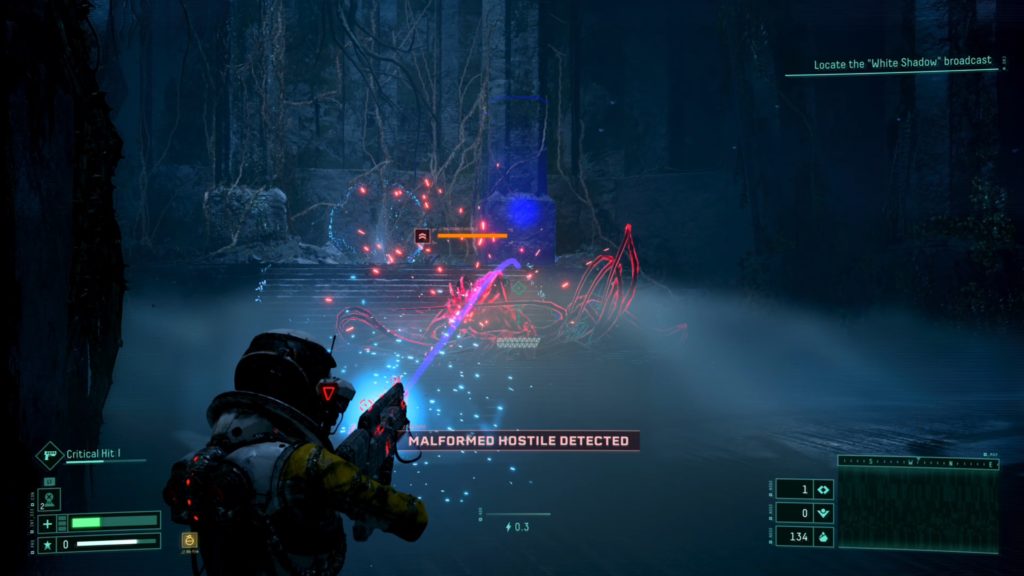 For stoic protagonist Selene Vassos, the mission is simple. Or at least, it begins that way. See, Selene works for Astra, the mothership of a space exploration organisation with a definite whiff of Weyland-Yutani, right down to the retro-futuristic computers installed in Selene’s scoutship, the Helios. Her job is to travel to far off worlds and survey them, documenting flora, fauna, and, where possible, civilisation.

Atropos is different, though. This overgrown, burned out husk of a world is host to what remains of an ancient civilisation referred to as the Sentients. Their bodies, mostly humanoid, litter Atropos, scattered like fallen ashes across the remnants of their once-mighty nations. After crashing her ship and barely surviving, Selene heads out hoping to find something that will help her repair the Helios and continue the mission – until she makes a grizzly discovery amidst the ruins and finds herself caught in a seemingly endless loop of survival, determination, and death. Each time she dies she relives the crash and must begin her exploration of Atropos anew. But this is not simply some time loop, for the corpses of her former attempts litter the world, alongside scout reports she can’t remember recording.

I didn’t expect a lot from Returnal’s story. Roguelikes aren’t generally known for their plot lines, but like Hades, Returnal’s story feels constant. Each new Cycle rearranges the contents of Atropos’ varied Biomes, and so while it’s not procedurally generated, you’re never quite sure which configuration you’re going to find. The story weaves its way through and between these Cycles, presented in Selene’s audio logs and sometimes meandering thoughtlines, in short cutscenes and, most importantly, in a very specific area you’ll encounter multiple times in your playthrough. There’s more to the story than is immediately apparent, as elements of Selene’s past, and evidence of her determination, ambition, and grief are shown like smudges of light through warping glass. 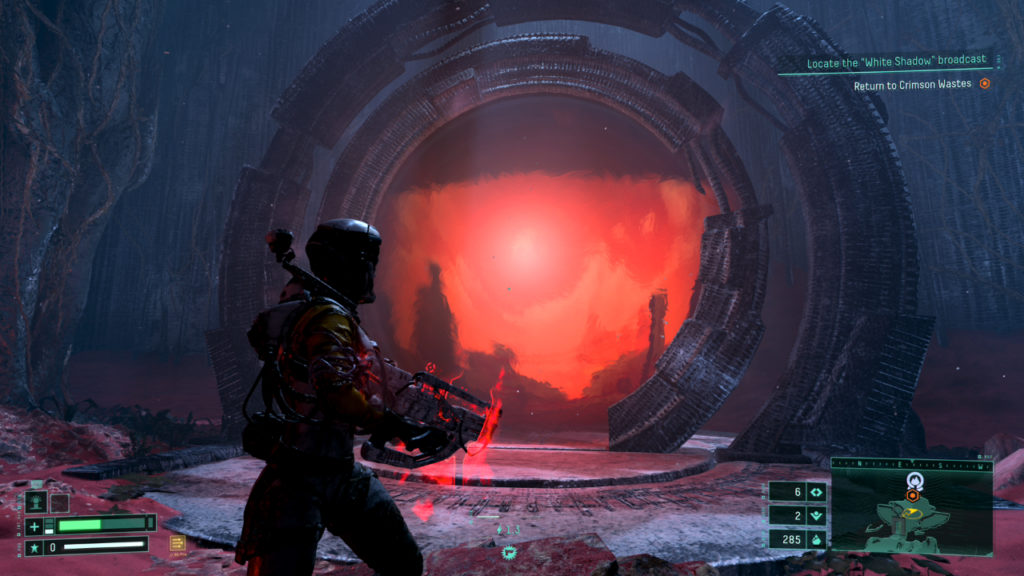 That said, of course, this is not a game built to tell a complex and involving story. There are few characters, and as with the Souls series, you’re left to piece together a lot of theories from tattered fragments of stimuli. The important thing here is exploration, and somehow Housemarque manage to maintain a fear of the unknown for the entire campaign. You always feel like you’re only seeing the edge of something, that there’s much more to this world happening in the distance, in ancient spires and forgotten ruins. You feel like an intruder, an interloper, and so you expect to be caught and punished at any moment. Even late in the game when you’ve unlocked a suite of gadgets and gizmos, you’ll rarely feel able to relax and let your guard down. It is a game that keeps on surprising you.

Like many Roguelikes, Returnal spits you back out at the start once it’s finished chewing you up, and each Cycle begins with you waking up inside or outside the Helios. You can potter about in the ship, reviewing things you’ve discovered, or taking part in online challenge runs that serve as a way to practice your skills and test your mettle for valuable resources. And like many Metroidvanias, it periodically gifts you with a new tool for traversing the world, reaching new areas, or finding new weapons. For example, one alien device you find allows you to use the teleporters scattered around the place, either to open new rooms or to backtrack to old ones. 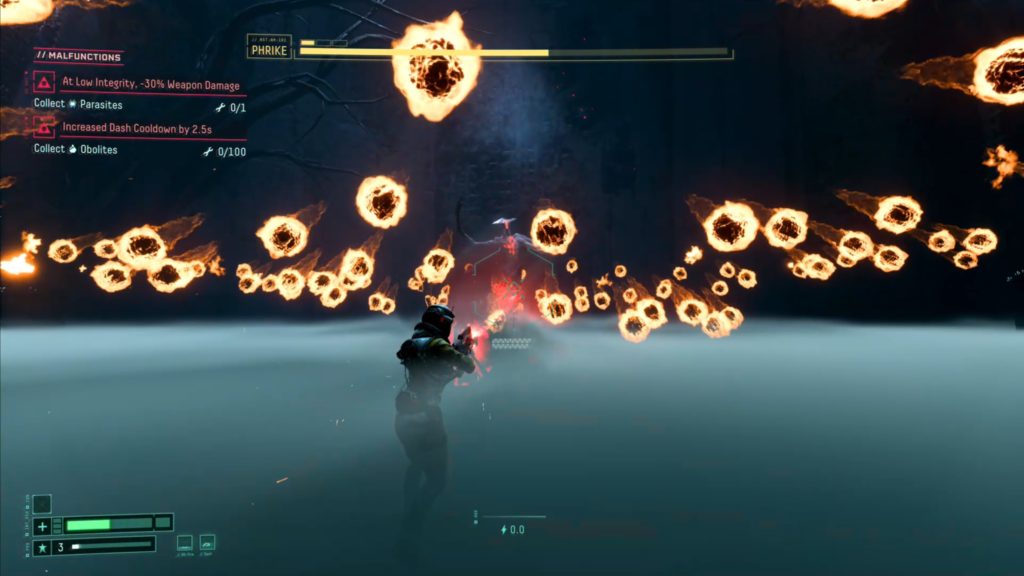 You’ll retain only permanent upgrades to your suit, and specific devices you find such as the aforementioned translocator. All the weapons and items you discover are mixed into a pool of possible drops and rewards, like Dead Cells, which you may or may not encounter during a given Cycle. This includes guns and their various, randomised alternate fire modes, single use power-ups, and artefacts that grant permanent buffs for the duration of a run.

Currency drops in the form of Oblites, a Xeno-type resource used at Fabricators to create items and artefacts, while many of the items you come across are Malignant and will cause temporary malfunctions to your suit until you satisfy certain conditions. Parasites you find offer a buff and debuff together, and you’ll often need to consider the trade-off. The likelihood is that you’ll rarely have two Cycles that play out the same way, especially as the enemy line-up alters each time, too.

Returnal: scream if you want to go faster

Combat here is a mix of third person strafe shooting and old school bullet hell. Enemies, including tentacled and bioluminescent alien monstrosities, lethal automatons, or the Sentients themselves, come in a variety of flavours, each packing a punch if you’re not sprightly on your toes. Selene can dash to avoid harm, using i-frames to negate damage completely if the timing is right, and return fire with weapons that feature secondary projectiles and alternate fire modes. It’s often frantic, with attacks coming from all sides from enemies that will shoot, claw, and charge you, that can trigger AoE bursts, use beam weapons, ground you in place or knock you on your arse. They can fly, sprint, dash, teleport and ground slam, and learning what each one does and the best way to take them down is half the challenge. You will die often, but you’ll learn something each time. 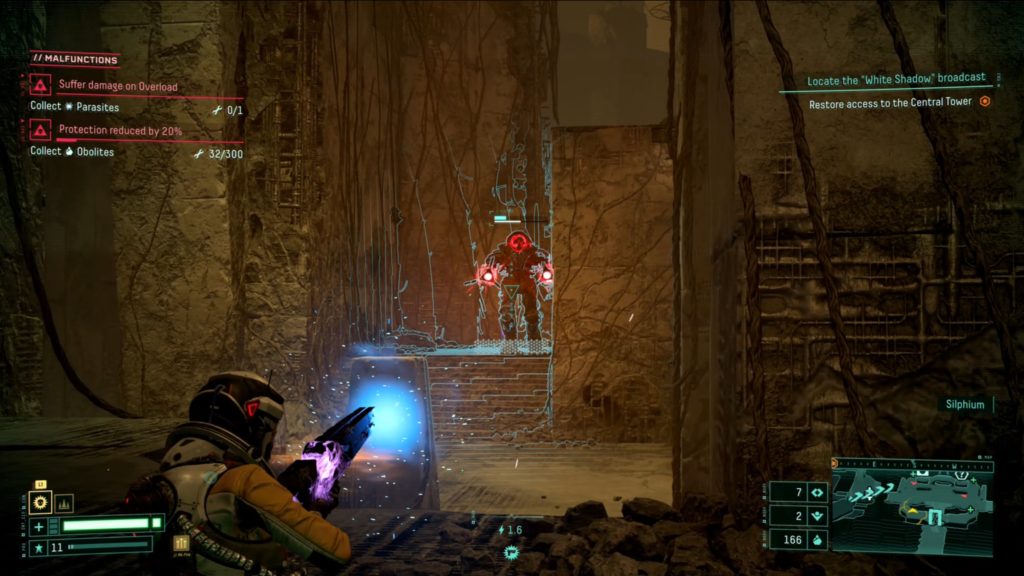 If there’s one thing that felt just a little out of place in Returnal, it was the bosses. None of them feel like lords of their domain like they usually do in such games. They don’t feel intrinsic to the story or necessary for the Biomes to function as they do, and instead just feel like they exist because games like this need bosses. The fights are universally hard and universally well designed, and beating them will take determination and skill. They often reward a new permanent upgrade, so you’ll always feel like it was worth it, I’d just have liked some real lore about them in the game world. The runs back to them are rarely easy either, as they often require you to run through at least part of some of the previous Biomes, and rushing to them will leave you under-geared and facing an even steeper challenge.

But I didn’t really mind having to run through Returnal’s Biomes over and over, because each one is either beautifully grim or hauntingly macabre. Ruins jut from the ground like broken teeth, wrapped with dark leaves or alien fauna that glows ominously as you approach. An ancient desert, vast and windblown, makes you feel insignificant with its magnitude. Citadels and towers and decaying fortresses stand like silent sentinels guarding the secrets of this desolate world. Housemarque have spared no expense with the world and level design, creating disparate Biomes that manage to feel like part of a greater whole.

At the time of writing the only complaint isn’t entirely down to Housemarque: turning off the PS5 resets the Cycle, so if you need to stop halfway through a run, you must use the console’s rest function – something which repeatedly resulted in me losing progress when the function failed to work as intended. There’s really no reason whatsoever that you can’t just turn off and restart exactly where you were or even at the nearest teleporter, and it’s something I hope they patch later.

That minor gripe aside, Returnal is an exceptional game. The fluid, graceful movement and satisfying, punchy gunplay combine with a sense of exploration at once both wondrous and morbid, and a drip-fed progression system that makes you feel like you’re always discovering or unlocking something new. Elements that should feel at odds with one another feel effortlessly cohesive thanks to Housemarque’s deft touch and singular vision. Returnal may not appeal to everyone given its relentlessly dark nature and unwavering difficulty, but it’s an absolute must-play for anyone who craves a genuine challenge.

Needs a save point system

Returnal's fluid, graceful movement and satisfying, punchy gunplay combine with a sense of exploration at once both wondrous and morbid, and a drip-fed progression system that makes you feel like you're always discovering or unlocking something new.