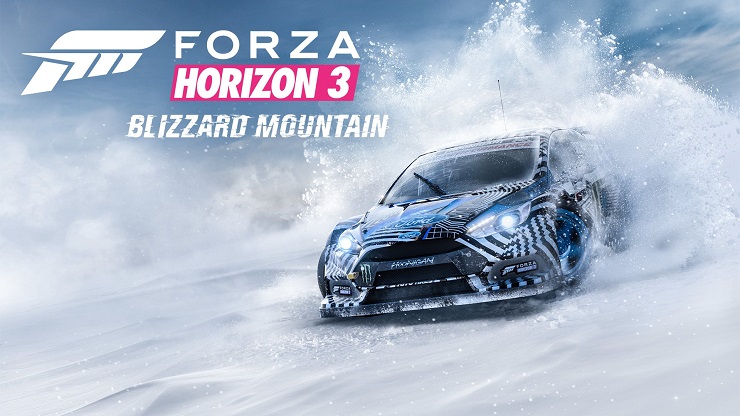 Forza Horizon 3 was spectacular. Its representation of open Australian roads and outback were a delight to drive around; its cars were realistic to drive, but easy to grasp, thanks to a plethora of accessibility options; its weather effects weren’t restricted to beautiful, sunny days and clear nights either, with some stunning rain effects that brought an extra level of challenge during particularly tough races.

But snow? In Australia? Yep, that’s right. Blizzard Mountain, as the name implies, takes place on the snow-covered side of the titular mountain. As returning mechanic Warren says: “Australia: now available in white.”

This being Forza Horizon, there’s no simple plane ride to this new destination. Where’s the fun in that? No no, Keira and Warren strap the newly added Ford Focus RS Gymkhana (complete with signature Ken Block livery) to a cargo helicopter and literally drop you onto the mountain slopes! This kind of opening event just sums up the Horizon experience. It’s not about the simulation of laps around Spa or Silverstone, it’s about the pure thrill of driving fast in entertaining scenarios, something that Blizzard Mountain delivers throughout. As you power down the mountainside, random Drivatars joining you as you hurtle downwards, you’re forced to learn how to drive through deep snow, over ice and on slushy roads, all without the need for boring and lengthy tutorials. When you do finally reach the bottom, you’re introduced to the new championship, and the reason you’ve left behind the beautiful, warm vistas of Byron Bay: the Kingmaker. This competition exists purely to prove who can tackle the mountain’s challenges better than everyone else, and it really does test your skills. Forza Horizon 3 had some great off-roading, but none of that truly prepares you for the brutality of Blizzard Mountain. If you haven’t grasped drifting yet, you’ll soon find yourself struggling to guide your chosen cars around the tracks of the DLC’s events. When you inevitably find your car struggling to turn into that corner, the handbrake will become your closest ally, allowing you to throw the back end around at the last moment. This is crucial when you hit black ice, which basically renders you a helpless passenger as all input is invalidated, but good handbrake usage can save you from disaster. It’s actually amazing that a sim-based game can feel so fresh and different, with a simple change of scenery.

And what scenery it is. It may be a small area overall (driving from bottom to top can be done in under five minutes) but there’s so much variety to the places you’ll see. From the peak itself, complete with massive satellite installations and whiteouts, through the frozen lake and hot springs, to the Horizon festival and snowman-strewn town at the base of the mountain, it never feels like you’re driving through the same areas. No small feat considering the map is no bigger than a portion of the vanilla game’s outback region. There are some breathtaking views as the sun rises, snow shimmering on the slopes, but those views will disappear almost entirely when those blizzards roll in. Visibility is reduced almost to zero even in daylight, the roads and hills blending into one big, grey blur, behind a curtain of snow that threatens to block what little you can see of your path. And if a blizzard hits at night? Well, let’s just say that you’ll be grateful for that rewind button. Blizzards will often hit during the main races of this DLC, spread throughout ten rounds of the Kingmaker tournament. Much like the main game, each new round of events will add several new markers to your map, including Bucket List challenges, speed traps and drift zones as seen throughout Byron Bay. Brand new events are added to Blizzard Mountain, with hill climbs and descents offering a more rally-inspired style to the mix. Some will come with a blizzard warning though, which at least gives you a bit of a heads-up before you go in. Progression is slightly more arcade here though, with the fan system replaced by a simpler star rating, depending on fulfilling certain objectives within each race. Finish the race and you’ll get one star, winning it will earn you a second star, but earning that third star is rarely as straightforward. Sometimes it’s a easy as passing a few cars, but other times require racking up high skill scores or performing a certain number of specific skills. The only problem with this system is that not everyone knows what a Show-Off skill is, or a Kangaroo skill, and the game doesn’t give you any help. You also need to win the race as well as meeting the skill objective, which is sometimes frustrating, as drifting 30 times will inevitably slow you down in corners and the AI won’t be slowing down for you.

Track layouts can also cause some frustration, as it throws uneven jumps at you constantly, which can lead to some rolls and smashes that are completely out of your control. And if you play with full damage switched on, you may as well turn it down to cosmetic now, as your vehicles will basically disintegrate beneath your seat otherwise, and you’ll barely finish most off-road races, let alone win them. If you need to buy a new car to compete in an event, you’ll likely struggle too. Snow tyres are a new addition to the game, and are essential to keeping your car pointing in the right direction, but when you buy a new car it doesn’t automatically fit these tyres, nor does it even give you the option. This is fine if you’re attempting to get the Achievement for winning a race without snow tyres, but otherwise it’s a bizarre oversight by Playground Games.

But these problems aside, this is still Forza Horizon 3. A game with the best handling of any racer out there, and a bit of a change in your driving style will likely find you enjoying Blizzard Mountain. Equipping a Lamborghini Centenario with snow tyres will result in one of the most fun drives you’ll have, especially if that drive happens to start at the mountain’s peak. The map may be small, and you can reach the final of the Kingmaker in around 4-6 hours, but the sheer amount of events and content (including more XP boards to smash, as well as a new barn find) will keep you going well beyond the 20 hour mark. Add the multiplayer to that, and you might as well kiss your social life goodbye.

Blizzard Mountain may be small, with a few issues here and there, but it’s still a fantastic expansion for one of this year’s best games.