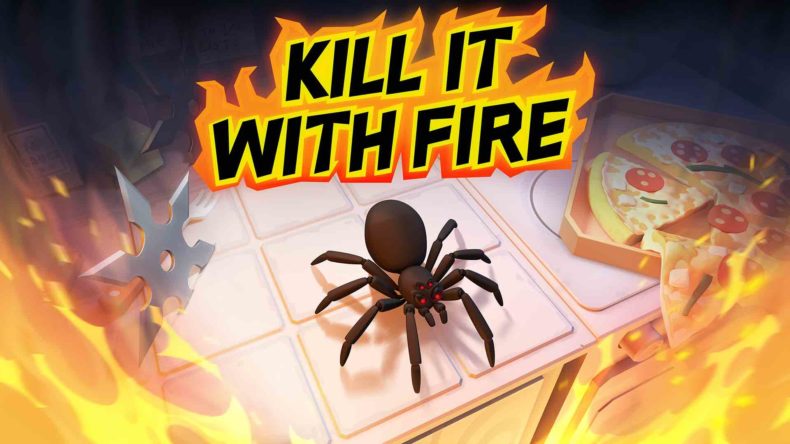 Kill it with Fire is a game about killing spiders with all manner of weaponry from handmade flamethrowers to ninja stars and shotguns. Besides this core conceit, there’s very little else involved, so it’s a good thing that it’s so satisfying.

Each mission is set in the room or rooms of a house, and your job is to search for anything with more legs than you and then remove it from existence with extreme prejudice. You’ll steadily unlock new weapons as you progress, pilfered from drawers and closets, or scavenged from household utensils. Doors and drawers are unlocked by the number of arachnids you splat, and your little victims can hide anywhere. While they can’t directly harm you, turning over a couch cushion to see a massive black spider on the back makes me jump every time. 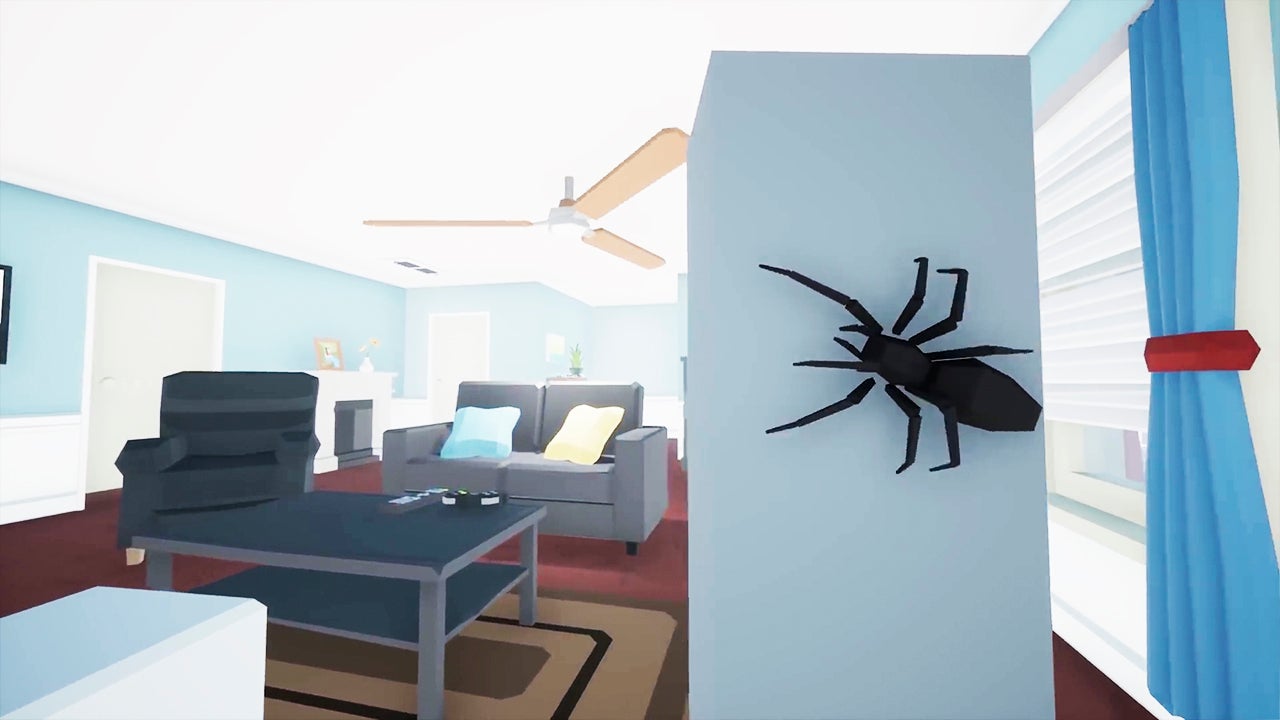 Once you’ve spotted them they’ll bolt, and you have to chase them around shooting, swatting, or burning everything in your path. Most missions have extra challenges that involve destroying stuff, too, and it’s always amusing to take a look around the house when you’ve unlocked the exit door to survey the damage you’ve done.

TVs, family photos, couches, beds, ornaments, everything is fair game of there’s a spider on it, under it, or in the general vicinity of it. I imagine that people without an intrinsic, primal fear of spiders (those people exist, right?) would get a lot less out of Kill it with Fire than, shall we say, “normal” people who find spiders at least moderately petrifying. But it’s also crazy fun to charge around a house with a frying pan or flamethrower and just wreck everything. I wonder if it would still be fun without the spiders.

It reminds me most of Embr, the physics-based fire fighting game I reviewed recently. It has a similar art style and atmosphere, but in this game, you’re the one causing the damage in the first place. Maybe some of those fires in Embr were started by people chasing spiders around with hairspray and Zippos? Who knows.

The controls are straightforward, the mission structure simple, but Kill it with Fire stuffs its stages with lots of extra challenges, hidden rooms, stashed weapons, special spiders, and various other things to ensure that you leave nothing where you found it and as little as possible in one piece. You can’t even really complain about the length of the campaign or overall lack of real variety, because it’s being sold at a budget price that’s more than fair for the amount of fun and satisfaction you’ll get from it. To be fair, it may have benefited from a little more challenge, as for most of the game you’re just finding spiders and then destroying everything in sight to kill them, but the lack of variety is less noticeable if you’re playing Kill it with Fire in short bursts.

There’s a few things thrown in to keep you on your toes, though. Leaping spiders and, notably, exploding spiders can make you jump, but you can’t get hurt. You will back-pedal instinctively, though, like you’re up against a Dark Souls boss. You can blow up barrels, explode a petrol station, and finishing all the challenges in a given level will activate a time-pressure gauntlet. None of it adds dimension, exactly, but it’s enough to keep you invested. If only the 9 levels were procedurally generated, this would be pure gold.

Creeping around a house, checking behind books and pictures, or crouching down with your spider-tracker beeping to check the crawlspace under the couch is oddly tense despite there being no danger or any real fail-state, and quite how the devs have achieved this is a marvel to me. If you’ve sat cross-legged on the edge of your bed with a shoe or hairbrush raised, ready to protect your family at all costs from an eight-legged terror, this is the game for you. I’m no therapist, but I’m pretty sure that next to the word “catharsis” in the dictionary, there’s just a screenshot from Kill it with Fire. Either way, please, please, don’t try this at home.

I'm no therapist, but I'm pretty sure that next to the word "catharsis" in the dictionary, there's a just a screenshot from Kill it with Fire.