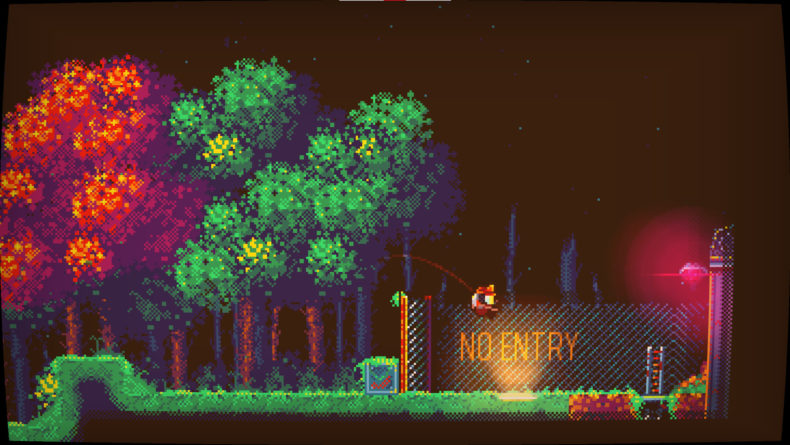 You may or may not be familiar with the SCP. It’s a fictional universe that exists as an online reservoir of the weird, the wonderful, and the downright sick and twisted. The SCP Foundation itself is a fictional organisation created to Secure, Control and Protect anomalous artefacts from our world and many others. It was likely the basis for the FBC in Remedy’s Control, so strong are the parallels. It’s also the same universe that Nuclear Blaze is set in.

In it, you play a firefighter called out to a blaze that happens to be in the process of razing an SCP facility to the ground. It soon becomes apparent that this particular facility houses an anomaly that, once ignited, never stops burning. It’s up to you to right that wrong, and save the day. And a bunch of cats, too, while you’re at it. You are a firefighter, after all. 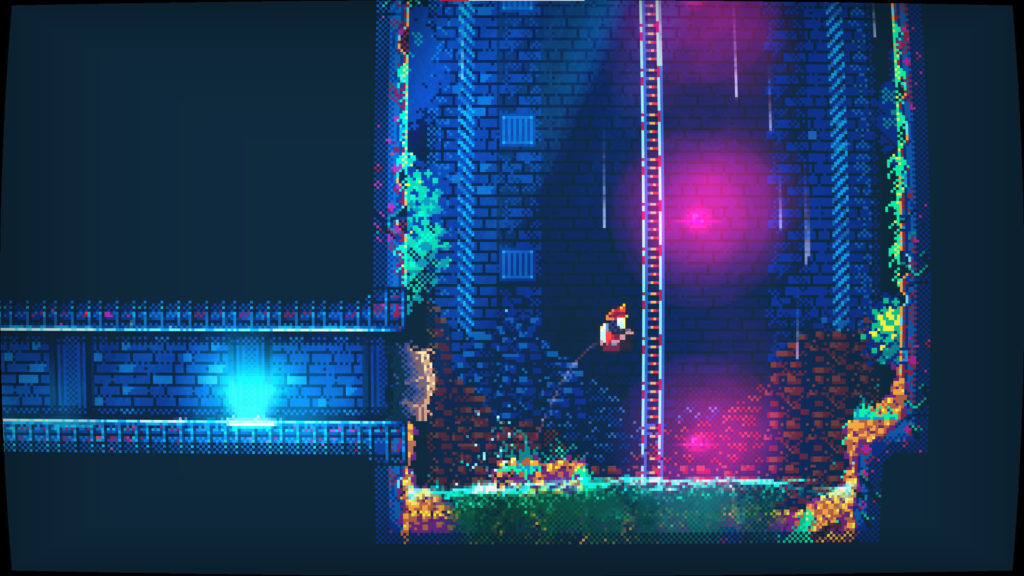 One thing I wasn’t conscious of before reviewing Nuclear Blaze was just how few firefighting games there are. I reviewed the highly entertaining Embr last year, but that’s about as far from Nuclear Blaze in terms of mechanics as it’s possible to be. This is a side-scrolling platformer that could almost be called a Metroidvania, if only there was more of it.

See, you begin with basic gear. You have a hose and a flame-retardant suit, and you can dodge-roll through some hazards. Your hose will spray in any direction – though it’s honestly not the most precise tool I’ve ever used in a game. At all times you’re surrounded by fire, and must put it out to proceed. Little fires can pop up around you, spread up walls, across the ceiling. You have a finite amount of water in your tank that you can fill up in certain rooms. This can be increased thanks to a power-up later on. 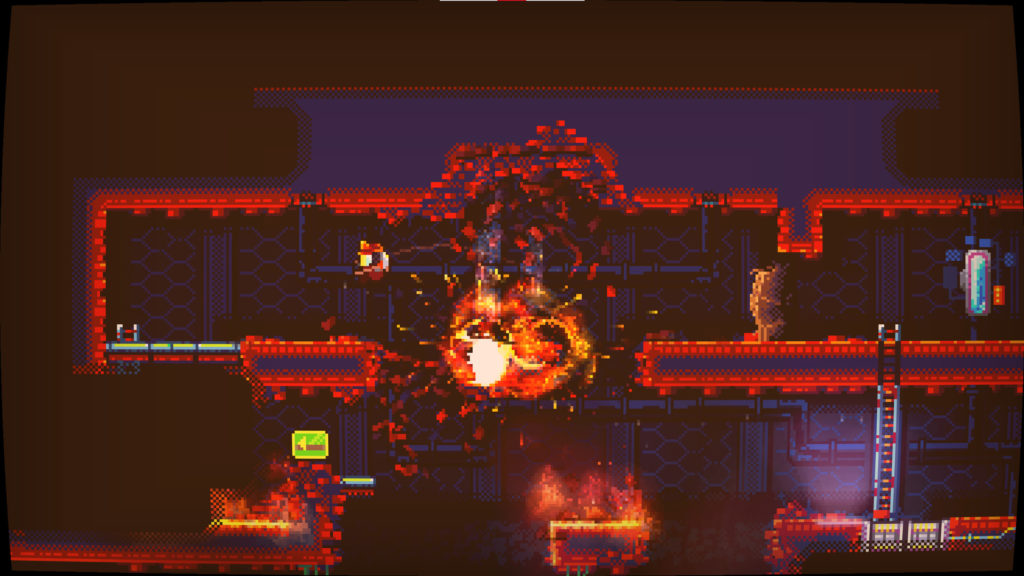 At times, Nuclear Blaze is so incredibly straightforward that the developers seem to have added things in just to throw you a curve now and then. Some doors, for example, will unleash a back draft when opened and cook you on the spot. You can’t tell which ones, either, which is fun – especially if you’re playing on the standard difficulty in which case it will one-shot you.

CHECK IT OUT: House of Ashes | Where to find all the pictures

You’d think that a game about firefighting to such an extent would do something interesting with the physics of fire, too. Like the way you could kind of predict the direction a blaze would spread in Embr and try to get ahead of it. In Nuclear Blaze you can’t, as the fire has completely random patterns. You can douse a room entirely, only to have the fire reappear a few seconds later as though it somehow jumped past you. It’s very odd.

There are, thankfully, very few enemies to deal with. In the later stages, you will have to fend off flaming hornets, which also have erratic attack patterns that you simply can’t predict. Speed runs of this game will be insane, to be honest, because the few mechanics there are act in such random ways that it’s almost maddening. 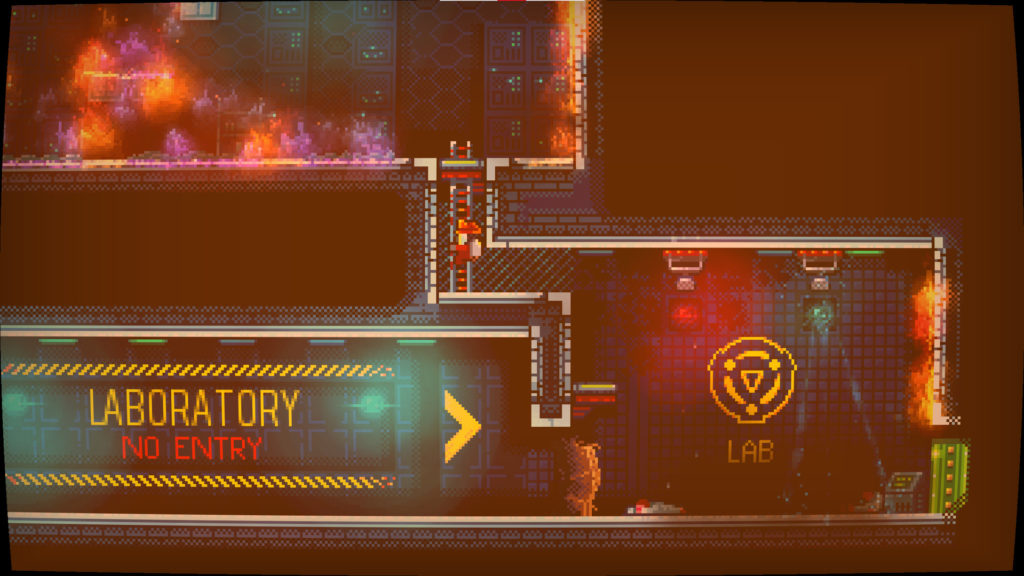 Ultimately, your end goal is to put out all the fires. You’ll come across NPCs here and there, and locked doors that need specific items to get through. Beyond that, it’s not particularly varied and doesn’t really do anything new. Oh, but there are 12 cats scattered about the facility which you can choose to rescue or not (though surely, everyone will, right?). They add some extra busywork to proceedings but not a great deal else.

CHECK IT OUT: Hands-on with Deep Rock Galactic’s new Seasons

If Nuclear Blaze was the first work of a new indie dev I would probably view it a little differently. The fact that it comes from one of the creators of Dead Cells is just… I don’t know if “surprising” is the right word. It’s not a bad game, by any stretch, but I guess I was just expecting more from it. It’s very short, and while the firefighting action is satisfying and fun, there just isn’t all that much to it. Still, go in knowing what to expect and there’s a lot of enjoyment to be had.

Go into Nuclear Blaze knowing what to expect and there's a lot of simple firefighting fun to be had. Oh, and there are cute kittens to save, too.