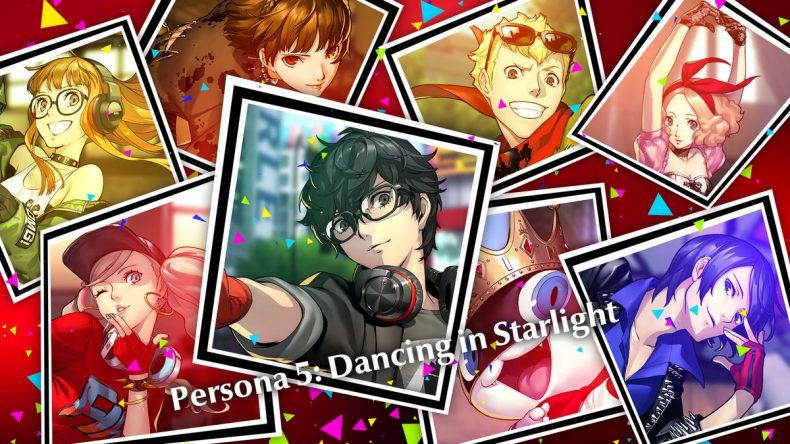 After the success of Persona 4: Dancing All Night there was little doubt that Atlus would try to do the same for their other popular Persona titles and that’s where we are with both Persona 3: Dancing in Moonlight and Persona 5: Dancing in Starlight. Instead of going PS Vita only, these two release on both PS4 and PS Vita in North America and Europe months after debuting in Japan on the same platforms.

Persona 5 is by far the most successful title for Atlus worldwide and it also happens to the their newest flagship release. This has advantages and disadvantages for both fans and for the dancing game. On the plus side, the game is still fresh in people’s minds and a whole new audience discovered Atlus through Persona 5. The problem lies in how little time the game has had to receive remixes and arrangements compared to other Persona games. The core dancing gameplay here is nearly the same as it was in Persona 4: Dancing All Night, but with one addition. Notes fly out from the middle of the screen towards the targets on each side, and your aim is to input the current node type button combinations with correct timing. Double notes are new to both P3D and P5D and they feel pretty pointless because you can already have two single notes after each other that feel the same for the most part. Hold notes, fever time, and all the other mechanics in Persona 4: Dancing All Night make a return.

While that game had a story mode that was hit or miss for fans, things are very different here. In addition to having less songs in the base game, there isn’t a traditional story mode. That has been replaced by a Social mode that has visual novel sections split up into various chapters per character. You unlock them by fulfilling various conditions through gameplay like clearing a set number of songs or using different costumes. If you want to see everything, get ready to play all the songs on multiple difficulties. The actual interactions aren’t great even though they are fully voiced very well by the original cast. Persona 5’s soundtrack is amazing. It has memorable battle music, great dungeon music, and is worth owning for any fans of the game. A lot of the songs haven’t transitioned to the rhythm game well, though, and feel out of place. The new remixes exclusive to this game are very good but they don’t make up for the small list of songs in the game overall. Persona 4 and Persona 3 have been out for many years more and have received various albums with remixes and arrangements so they kind of have an unfair advantage. I was hoping Atlus would wait for enough material before doing a Persona 5 rhythm game instead of releasing Dancing in Starlight in its current state. The opening song is probably the best track here.

You probably already know how amazing the UI and menus are in Persona 5. They have translated well to the rhythm gameplay and game in general. It felt great seeing the Persona 5 environments and cast on the Vita and it made me hope we get a portable release of the game in the future. Atlus has done a great job with the visuals on Vita and in the outfits for characters in the game. There is a bit of slowdown in some songs when there’s a lot happening on-screen. I tested this on two different Vitas. The main menu has a few transitions that could be snappier as well. While Persona 4 Dancing All Night was built for the Vita, P5D and even P3D feel like they are pushing the ageing handheld a bit too much. Overall, Persona 5: Dancing in Starlight is definitely the weaker of the two games. It has had less time on the market and hasn’t really received enough arrangements or remixes that complement the base game music. While it’s mostly great on its own, I’m not a fan of many of the songs in a rhythm game setting. Hopefully the DLC that’s about to see a steady flow soon fixes this issue but the base game should’ve had all the DLC from the get go given the asking price compared to how much content P4D had. The lack of a physical release stings as well since there are multiple games seeing physical releases on Vita into early next year.

Some of the songs feel out of place
Some performance issues

Persona 5: Dancing in Starlight is a rhythm game that is very good but one that should've been released later on so it could've had a more varied soundtrack with better remixes.