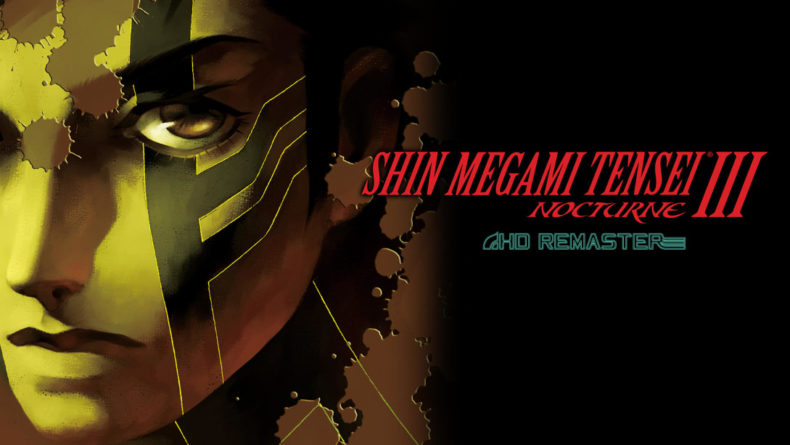 The first Shin Megami Tensei game I played was Nocturne (which as a PAL gamer will always be Lucifer’s Call) and to say I was unprepared would be an understatement. After years of playing Pokémon and Final Fantasy, I thought it’d be a great idea to try another hit JRPG. It didn’t take long for me to get wrecked by powerful bosses, and give up entirely. Now my past has come back to haunt me, in the form of Shin Megami Tensei III: Nocturne HD Remaster.

A trip to visit a teacher in hospital for our protagonist ends in disaster, when a demonic apocalypse called The Conception destroys all humanity outside of the medical centre. As if this wasn’t enough, to help survive in this new monster filled world your character is transformed into a Demi Fiend. If you’re coming to Nocturne from the Persona series don’t expect the level of story content you’d find in that social link adventure. Shin Megami Tensei III is much more about gameplay than meeting new characters.

If you’re familiar with Shin Megami Tensei games then you’ll feel right at home with Nocturne’s turn-based combat. To succeed against the difficult foes of this new world, you’ll need to focus on pressing the enemies’ weaknesses. Hitting a baddie with an element or physical attack it’s weak to will grant your party an extra turn, and can really turn the tide of battle. 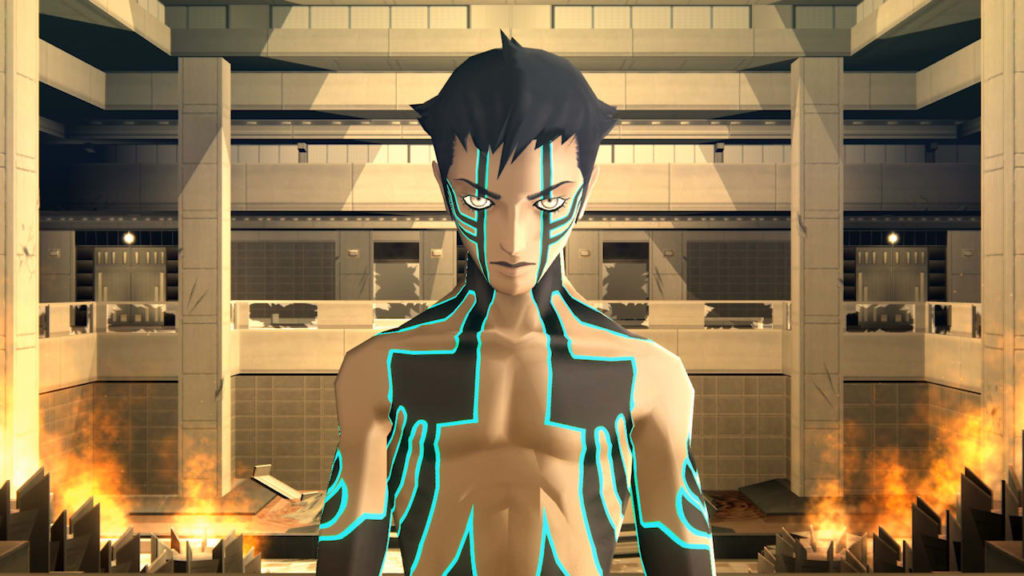 Alongside pressing turns, Shin Megami Tensei III: Nocturne requires some actual strategy to beat battles. Just using your most powerful attacks won’t get you very far here, and taking advantage of status effects and buffs is the only way to ensure your party doesn’t wipe against the infamous hard bosses you’ll meet along the way.

It’d be suicide if you tried to go into battle alone, so it’s important to make friends with some of the demons you meet along your strange journey. You have the option to chat with any monster you battle against to try and get them to join you, and will usually have to give them some items, money and maybe even answer a theological question or two. There are even abilities that your own pals can use to help with conversations, and sometimes a bit of flattery goes long way. 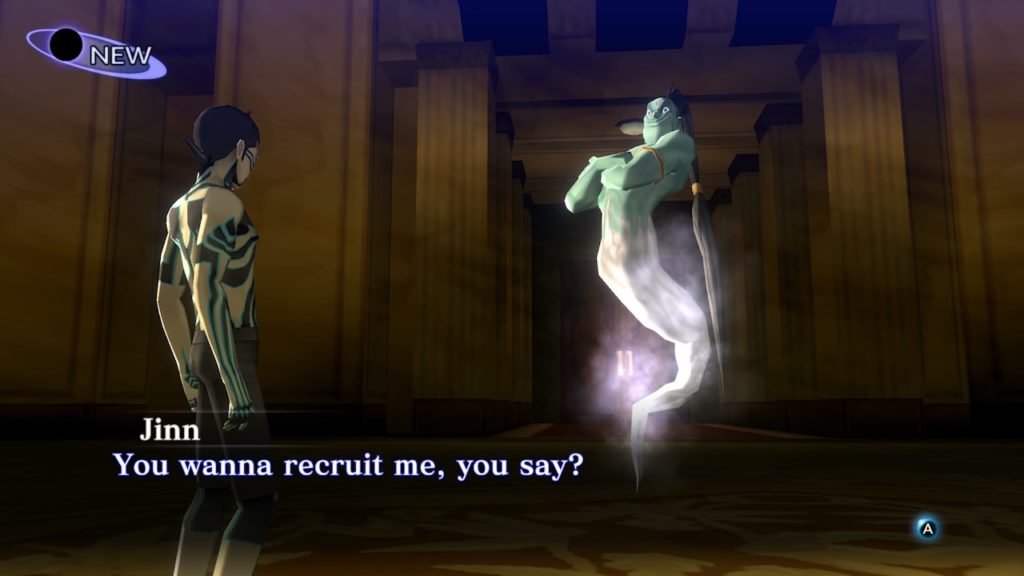 Once you’ve made your first demonic buddies, it won’t take long for them for them to get outclassed. Levelling them up can only help so much with this, so don’t get too attached because fusion is the name of the game. Different demons combine to make new allies, and as long as you’re a high enough level it’s as easy as choosing who you want to mix and heading to the Cathedral of Shadows. New for the remaster is the ability to select the skills that carry over to your new creation, so you don’t have to worry about useless skills getting passed down due to bad luck.

Upgrading yourself is much simpler than your allies. Leveling up allows you to assign a new stat point, and there’s only one type of equipment to worry about. The Magatama you have equipped gives you a beefy stat boost. It also controls what abilities you learn as you level up. You’ll keep the abilities regardless of which mysterious relic you have equipped, so sometimes you might have to settle with using a weaker healing Magatama to get yourself some curing skills. 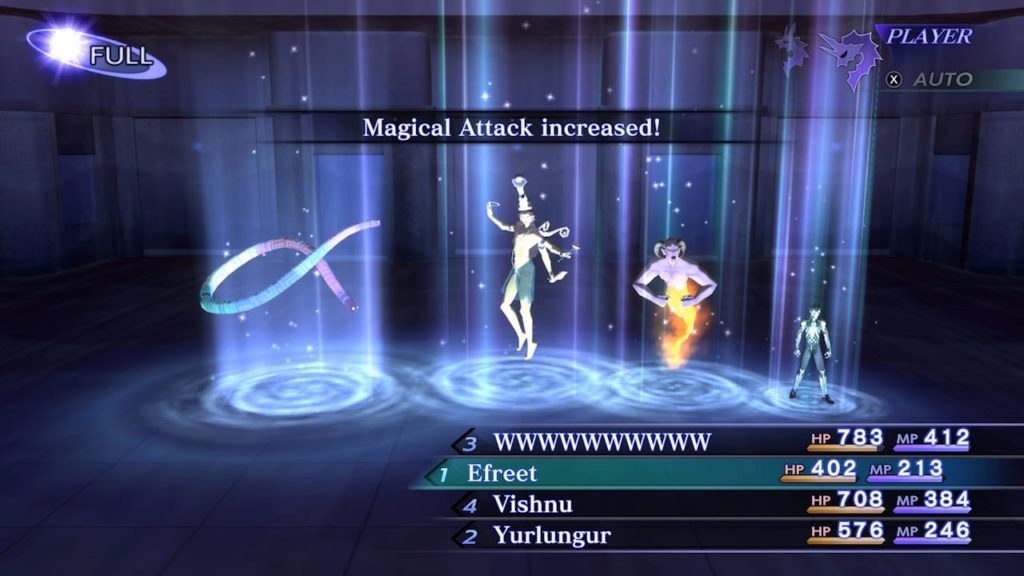 Shin Megami Tensei III: Nocturne was a phenomenal game in 2004, and has actually aged very well. I was excited to see what could be improved in this HD Remaster. But I’d conclude it’s a bit of a mixed bag. The new voice acting and improved character models are a welcome addition, but outside of that not a huge amount has changed. Cutscenes aren’t displayed in widescreen and instead have a weird blurry border on each side. Oh and the menus are incredibly drab compared to the stylish Persona series.

Above all these issues though, the biggest problem I have with Nocturne is how much content is locked behind the Digital Deluxe version. Bonus maps, music, difficulty modes and Devil May Cry’s Dante are all only available if you take the plunge on the more expensive edition, and I’d expect to always get the definitive version of a game when buying a remaster 17 years later. Dante was even available in the game originally, so content has actually been removed from the base game here.

Shin Megami Tensei III: Nocturne HD Remaster is a great game, but it just isn’t a great remaster. The thoughtful turn based gameplay and eerie setting are as compelling as ever, and a testament to how good Atlus is and always has been at making phenomenal JRPGs. If you haven’t played the game before you’re in for a treat, but if this is your second time in the world of Nocturne don’t be expecting much in the way of bells and whistles.

Shin Megami Tensei III Nocturne HD Remaster is as great now as it ever was, but doesn't have much new for returning fans.