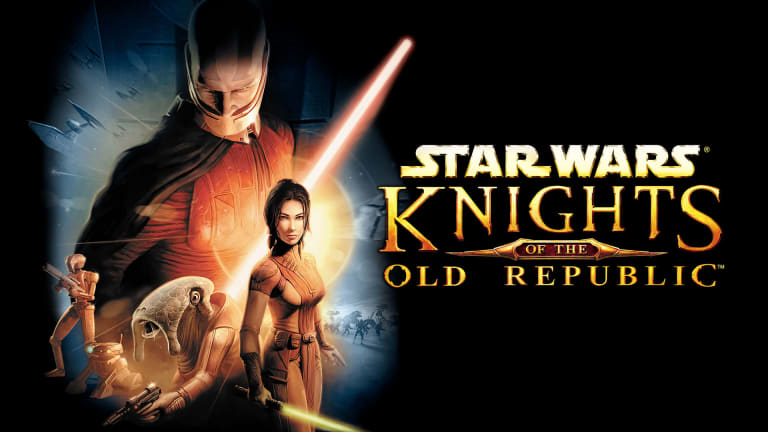 There have been some fantastic Star Wars games over the years. Ranging from arcade classics to more modern success stories, fans of the greatest sci-fi franchise have had a lot to play over the years. A huge number of talented developers have brought the world of Jedis and Wookiees to life in the video game space, and whether you want to swing a lightsaber, pal around with Darth Vader or drive a pod racer there’s sure to be one you’ll love. My personal favourite though has to be Knights of the Old Republic. The sprawling Bioware RPG gave me everything I ever wanted from a Star Wars game, and if you missed it the first time around it’s now available on the Switch.

While serving aboard the Republic ship The Endar Spire, our custom made amnesia-riddled hero finds themselves in the middle of a ferocious attack from the Sith. After grabbing the last escape pod with new ally Carth and landing on nearby planet Taris, an adventure to find a powerful Jedi who went missing in the attack and save the galaxy begins. The story branches off in all sorts of intergalactic directions as you progress, but the one constant is that it’s always engaging. 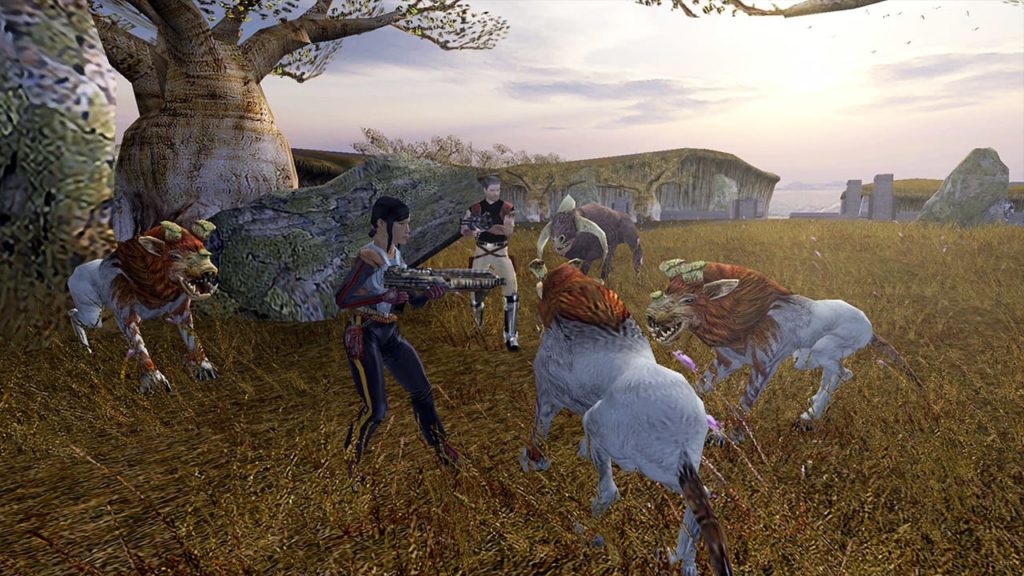 Don’t go into Star Wars: Knights of the Old Republic expecting to meet up with all your favourite sci-fi characters though, as the game is set 3,956 years before A New Hope. There’s still plenty of Star Wars elements throughout the game though. Lightsabers, Droids and that blaster sound that triggers all of your dopamine are all present, but if you were hoping to rub shoulders with a Skywalker you’ll be disappointed.

In a world full of Sith, you can be sure there’ll be plenty of fights to dive into in Knights of the Old Republic. Combat is D&D based, with each action triggering behind the scenes dice rolls to determine damage and if you hit a foe. Although combat appears to take place in real time it’s really turn-based, with each action you choose being unleashed every six seconds. The mechanics of battle mean that early game combat is a little lacklustre, as you watch your character miss with their blaster three times in a row. This doesn’t last long though, and before you know it you’ll be using force powers, grenades and precision shots to decimate your foes.

There are a bunch of decisions you’ll need to make when leveling up your character, with stats, skills and feats to choose once you’ve got enough XP. Skills are generally used outside of combat, and can make your life easier in all manner of ways. A character good at Computer Use can use a console to activate turrets or open locked doors, Demolition expertise will allow you to disable or even pick up mines placed in the world, and Treat Injury makes you better at treating injuries. The class you choose at the start of the game will determine which of these you are better at innately, but fortunately you’ll make enough pals on your adventures to be able to cover all of the bases. 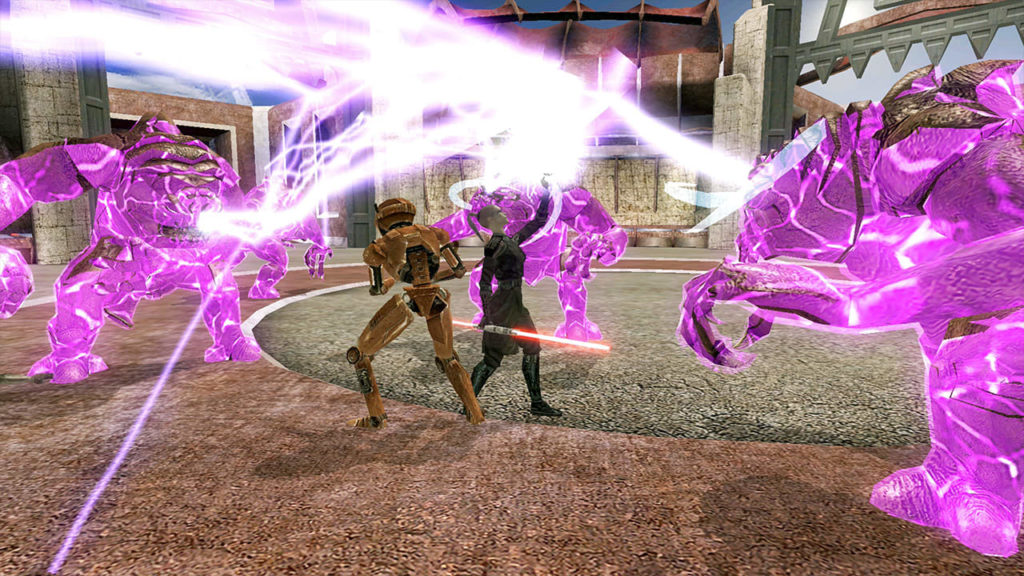 Feats are more important when it comes to taking down Sith directly, and either boost your stats passively or are actions you can choose. Knights of the Old Republic is a very difficult game, so choosing the right action each turn is vitally important. For example using a rapid fire attack might make sense when trying to quickly finish off a foe, but since it lowers your defence you’d better be able to handle the return fire. Once you’ve got three characters to manage you’ll need to use all their skills in tandem, with incredibly satisfying results.

When it originally launched, Knights of the Old Republic was one of the earliest games to feature a morality mechanic. Interacting with people in different ways will earn you light or dark side points, which has huge implications throughout the game. As well as affecting the story, your alignment also affects which allies will want to stay with the party and what force powers you have access to. To this day one of the best experiences I’ve ever had with a morality system was when my KOTOR character went from goodie goodie to Sith menace after fighting for Wookiee rights got out of hand. Even in 2021, it is truly exceptional.

I can’t talk about Knights of the Old Republic without mentioning Pazaak. This legendary Star Wars card game is the single best optional RPG card game of all time, and where around half of my play time on any KOTOR run is spent. Pazaak is essentially like Blackjack, where you are drawing cards with the aim of hitting a total of 20. The difference is that in Pazaak you bring four additional cards to a game, which you can use to add or subtract (if you’ve gone over 20) from your score to beat your opponent. Gambling of Pazaak is dangerously compelling, and I often end up spending more on new cards than I do one laser guns. 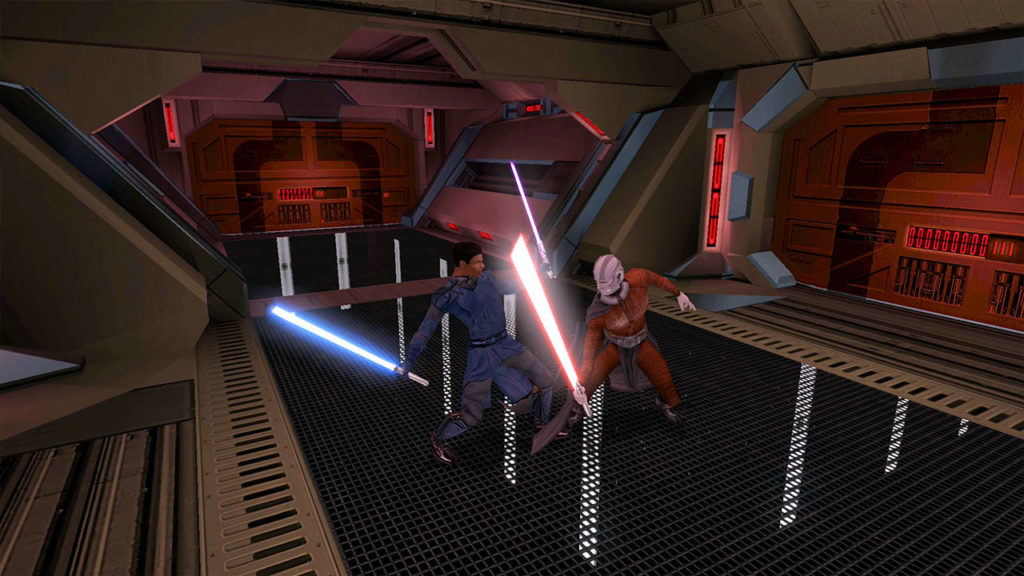 I first played Knights of the Old Republic on the original Xbox, where it ran pretty terribly. Upgrading to the Switch for this playthrough was an absolute delight, with the game running incredibly smoothly. Whether you play handheld or on the big screen, this version of the game is simply one of the best ways to play KOTOR. I played mostly in handheld mode, and it never really stopped feeling magical that I was able to enjoy a sprawling Bioware RPG on the go.

Star Wars: Knights of the Old Republic is the best game Bioware has ever made, and this Switch port of the game is exceptional. It’s a game where choices matter, whether it’s a decision that affects your morality or what you put a stat point in. The story is exceptional whether you’re a Star Wars fan or not, and if you’re anything like me Pazaak will steal hundreds of hours from you. It might take a while for the combat to get truly exciting, but for the greatest Star Wars game ever made it’s worth persevering.

Early combat is a bit dry

Star Wars: Knights of the Old Republic is still exceptional 18 years later, and this new Switch port is the best version we’ve ever played.

You may also like
BiowareStar Wars: Knights of the Old RepublicReviews