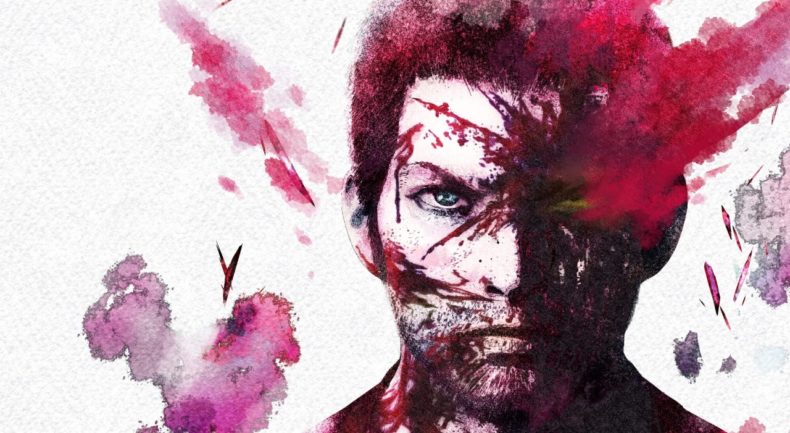 Team Ninja is a developer that doesn’t get enough credit. While their record is far from perfect, they’ve put out some of the best pure action games of the last few decades. Not to mention Nioh 2, the best Soulslike available that wasn’t developed by FromSoftware. With Stranger of Paradise: Final Fantasy Origin, they’re attempting to combine distinctly Soulsian elements with the established universe of Square-Enix’s legendary Final Fantasy. Perhaps predictably, results are somewhat mixed.

Most of the expected Final Fantasy tropes are there. Party of heroes with varying degrees of emo hair, Phoenix Down, Tonberries, magical crystals, a metric ton of black leather, and lots of flashy special effects. What’s almost frustrating is that these elements work perfectly well within the framework of a story-driven action RPG. But the added Soulslike mechanics fit in about as comfortably as a battleaxe in a jockstrap. 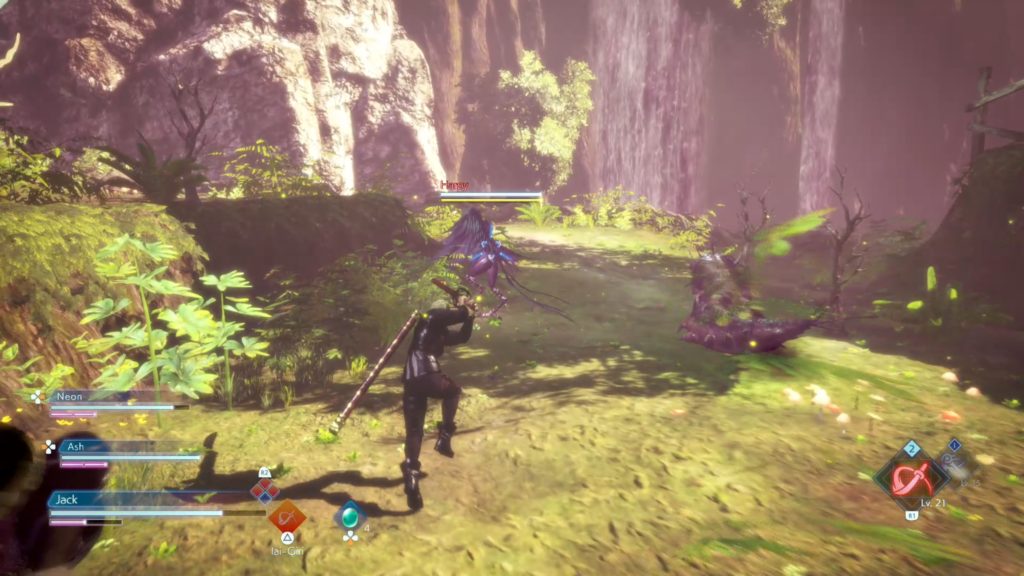 You play as Jack, a very blonde man with a major nark on. The cause of Jack’s eternal bad mood is Chaos, the embodiment of a terrible darkness that has left the world overrun by monsters and evil. Joined by a group of allies he can barely stand to be around, Jack’s primary mode of greeting is to ask whoever he’s talking to if they are Chaos, before ripping them in half to see if they’re hiding any Chaos in their chest cavities. It makes the standard Final Fantasy protagonist hero worship feel all the more strained. But they follow Jack around, drawn together by shared amnesia, a general sense of duty, and their mutual love of overly-elaborate coattails.

Missions play out in a similar fashion to Nioh. There’s a map screen wherein you select your mission, or a side mission set in the same area. You’re zipped from location to location with nothing as delicate as a hub to explore. You can visit the Smithy and dismantle weapons for materials with which to re-roll your existing weapons. But that’s about it outside of the missions themselves unless you want to tweak your characters’ gear, jobs and special abilities. Which you might well do, since min-maxing is certainly rewarded here. 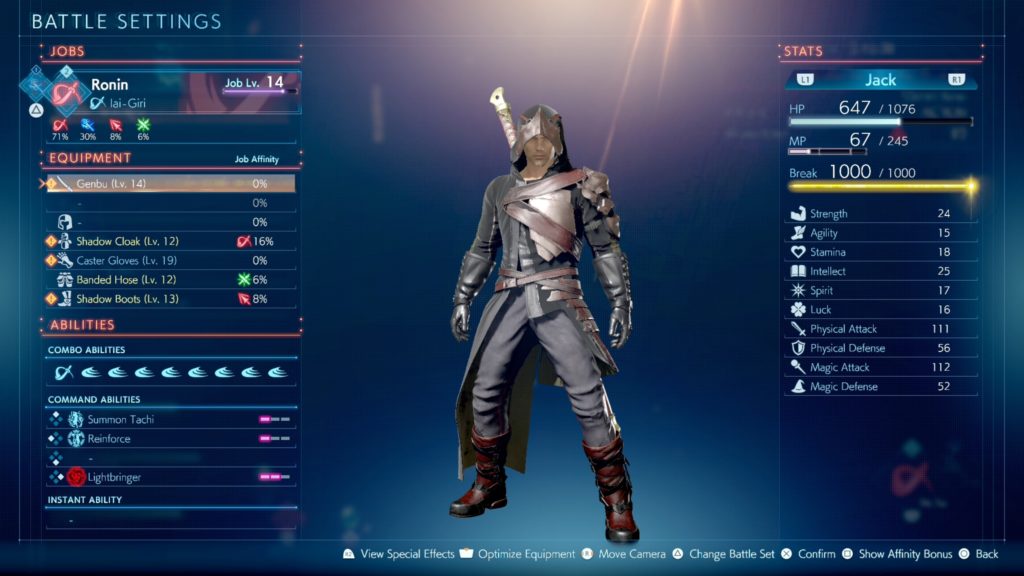 Jack of all trades

There are over half a dozen weapon archetypes, and multiple sub-types of each. In lieu of a class system, Stranger of Paradise: Final Fantasy Origin instead offers you “Jobs”. By equipping certain weapons you’ll assume that job. Strapping on a sword and shield will make you a Swordfighter, while twin daggers mark you as a Duelist. As you progress you’ll unlock up to 25, many of which are hybrids or advanced versions, such as Knight and Dark Knight following Swordfighter.

It’s a fun, intuitive system. It’s helped by the option to press the touchpad in the Battle Settings screen to automatically equip the best gear you have. Which is something you’ll need, by the way, as Stranger of Paradise throws loot at you. Gear drops look exactly as they do in Nioh 2 and come at you just as thick. It wouldn’t be so bad but nine out of ten drops are vendor trash that you don’t need. Yet the allure of that one-in-ten makes it all worthwhile.

Combat is in real time, but while it aims for the nuance of a Soulslike, it lacks the immediacy and precision seen in Nioh or its sequel. It’s fast and fluid, sure, but its reliance on blocking, parrying and dodging is hampered by the fact that certain enemies can hit right through your combos. The idea is to hammer enemies until you break them, whereupon s single button press will destroy them and top up your magic power meter. It’s not always easy to track though, and It’s not helped by the frankly insane amount of attacks that totally blind you. 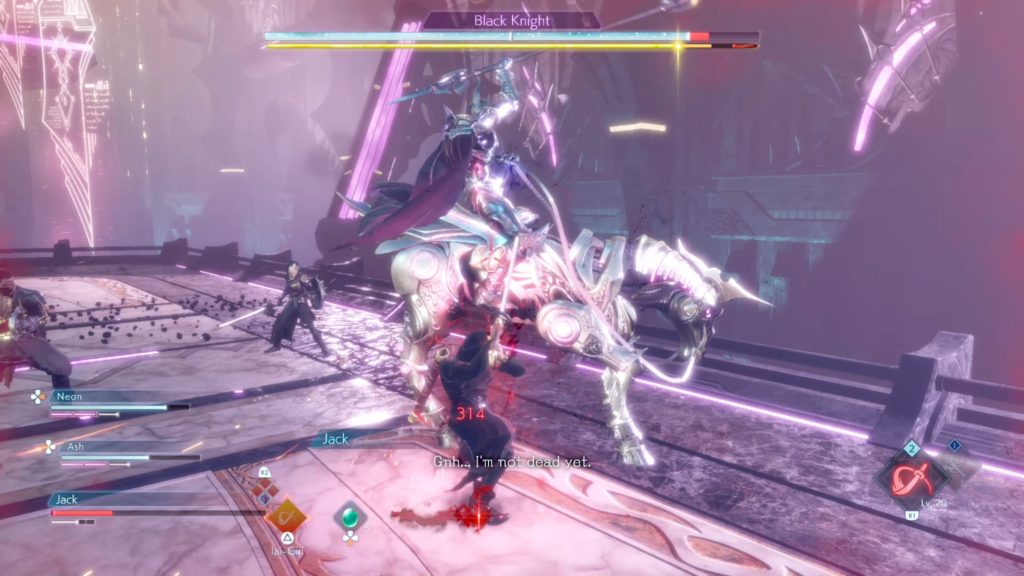 Bosses in particular have a tendency to fill the screen with light and colour and particle effects, all of which make it almost impossible to see an attack coming in time to dodge it. It’s infuriating, especially given Team Ninja’s pedigree with action games. It’s like everything is dialled up to 11, and some things just don’t need to be.

A modifiable combo system brings back memories of DONTNOD’s Remember Me (no pun intended). As you acquire an affinity with a certain Job, you’ll unlock new combos which you can stack in a particular order. So when you play as a Greatsword-wielding Berserker (which is the next Job up from a Swordsman), you can set your first tap of the Ability button to cast Berserk, which buffs you. Then you set the next combo to, say, Onslaught, so after pressing Attack once and then the Ability button, you’ll perform a standard attack followed by the Onslaught skill. It sounds complex but quickly begins to make sense in practice.

Elsewhere the dependence on Souls mechanics gives birth to incongruities that wouldn’t exist otherwise. For example, enemies respawn when you die or use a Cube (Stranger of Paradise’s unimaginatively named Bonfire-allegories). But you don’t leave behind XP or currency when you die and there’s not really a need to farm. So it kind of just happens because. Also, you can open up shortcuts in certain missions to make running back from a Cube easier, but most shortcuts are right next to Cubes anyway. 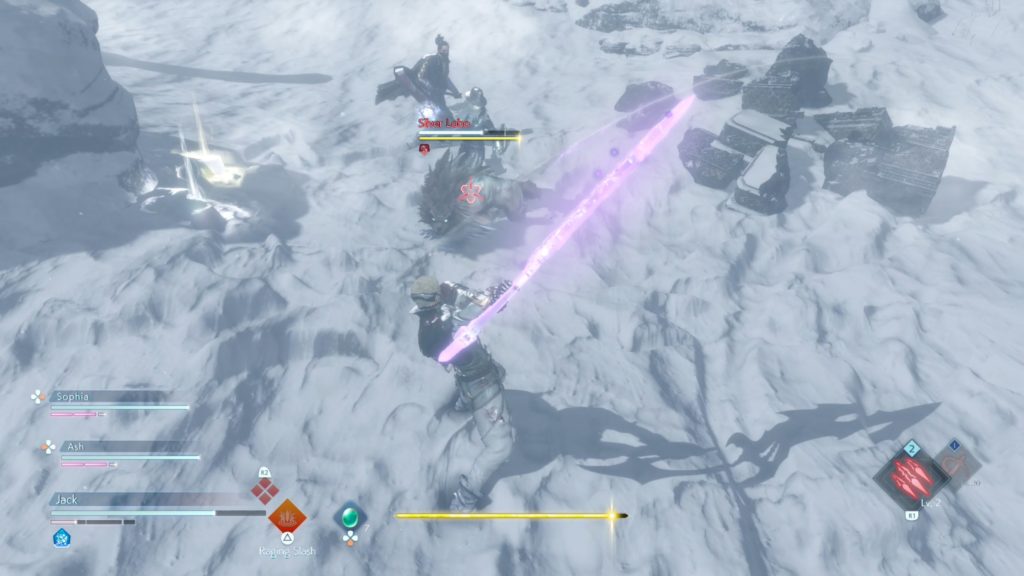 The sum of its parts

It may be testimony to Team Ninja here that, despite its shortcomings, I’ve been utterly gripped by Stranger of Paradise. I did drop the difficulty to Story for several of the boss fights, but some of them are borderline cheap. But coming off the back of Elden Ring it felt almost relaxing to play something with a shallower difficulty curve. I don’t feel the need to challenge myself unduly while playing Stranger of Paradise: Final Fantasy Origin; I’ve just been enjoying the frenetic combat for what it is. Also, the haptics are put to excellent use here and really help to increase the immersion.

The multiplayer works superbly, too. You simply set up a room and invite a friend to play with you. They’ll assume the guide of one of your companions, but only on a cosmetic level. Underneath they’ll have the gear and Jobs from their most recent save. Any story progress or loot and XP gained will carry over to their character when you’re done. It makes co-op feel rewarding and fair, and the fact I experienced no lag or connection issues was promising.

Graphically it runs smoothly on PS5, with little slowdown even when it’s frantic. But then it’s also not particularly visually intensive. Environments are fairly lifeless, and some muddy texturing lurks beneath the threadbare bedsheet of environmental shimmer. Everything gleams like it’s been smeared with baby oil and it has the result of making everything look kind of flat, especially the outdoor areas.

Stranger of Paradise: Final Fantasy Origin – What’s in a name?

That said, there’s an awful lot to like in Stranger of Paradise: Final Fantasy Origin. As of the time of writing there’s no cash shop for microtransactions, which is almost unheard of these days. The minute-to-minute gameplay is genuinely fun, even though the game overall lacks a true sense of identity. There are too many ideas in the mix, and not enough to do outside of just jumping from mission to mission. This can make it feel a little repetitive during long sessions.

But it has more heart than most people will be expecting. It’s not just a Souls clone in Final Fantasy’s skin; it’s a well-made action RPG that only occasional stumbles off the beaten path. The Job system offers depth if you want it, while the combat has enough challenge for die-hard players and enough options to satisfy those who like their games a little less bloody-minded. Stranger of Paradise is worth picking up if you’re a fan of Nioh or Final Fantasy, but it’s no true representation of either. It’s just a really good time on its own merits.

Stranger of Paradise: Final Fantasy Origin is a decent action RPG, but it's occasionally weighed down by unnecessary mechanics and inconsistent difficulty.