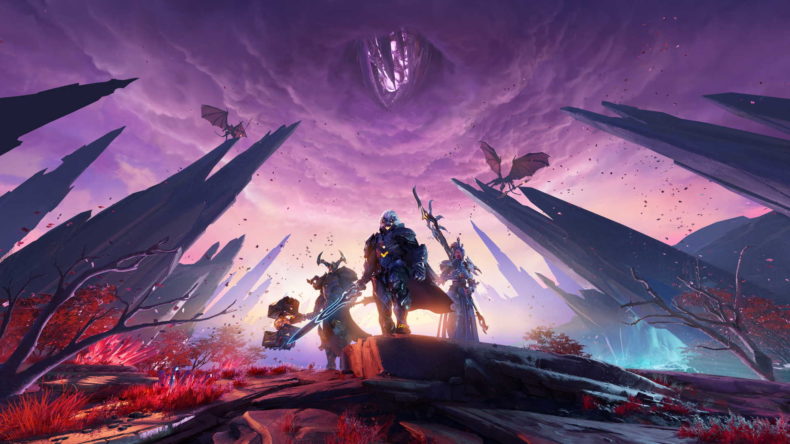 As one of the few lunch titles for the PlayStation 5, Godfall was always going to be judged harshly. And while I felt some of the criticisms were a little strong, I don’t think it helped itself at launch. I found myself drifting off it after only around a dozen hours and I’ve only been back sporadically since.

The one thing I really liked beyond the genuinely gorgeous visuals was the combat. Godfall’s melee battling is frenetic and fun. Unfairly labelled as button-mashing, there’s actually a degree of depth to it – especially as you unlock more and more skills. The different weapons have their Northern and Southern attacks (that’s standard and heavy to you and I). And the Valorplates, suits of armour that come with their own skills like diluted Warframes, add some variety. 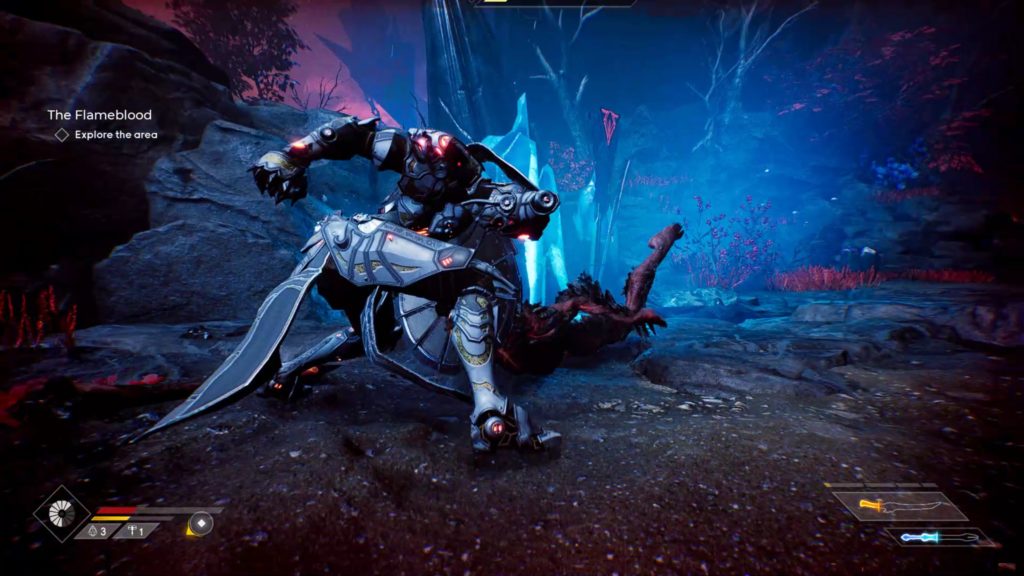 Godfall: Fire & Darkness – Return to the world of Aperion

Perhaps the one thing Godfall doesn’t get enough credit for is the story. Gearbox didn’t do enough here to push the narrative front and centre, but the world is genuinely interesting. The war between two demi-God princes is a great backdrop, and gives your protagonist, Orin a reason to fight.

CHECK THIS OUT: The best (and worst) Alien games so far

Fire and Darkness is the first story expansion for Godfall, and introduces a host of new features and endgame content. For a start, there’s more story. Godfall’s actual plot wasn’t all that great, but Fire & Darkness attempts to up the ante. A new, incredibly powerful villain raises the stakes for Orin and Co, shaking up the core group. With the Seventh Sanctum drained of power, Orin must brave the Fire Realm to seek help. This is done across 4 new story missions and 5 Hunt missions based in the new Realm.

Aesthetically, this new area is much darker than most of Godfall’s previous content. A handful of new enemies continue the theme, too. Smashing your way through hordes of burning demons and magma-skinned monstrosities at least adds a new visual twist. As do all the new skins, as a bunch of these have been added for each Valorplate in the endgame. 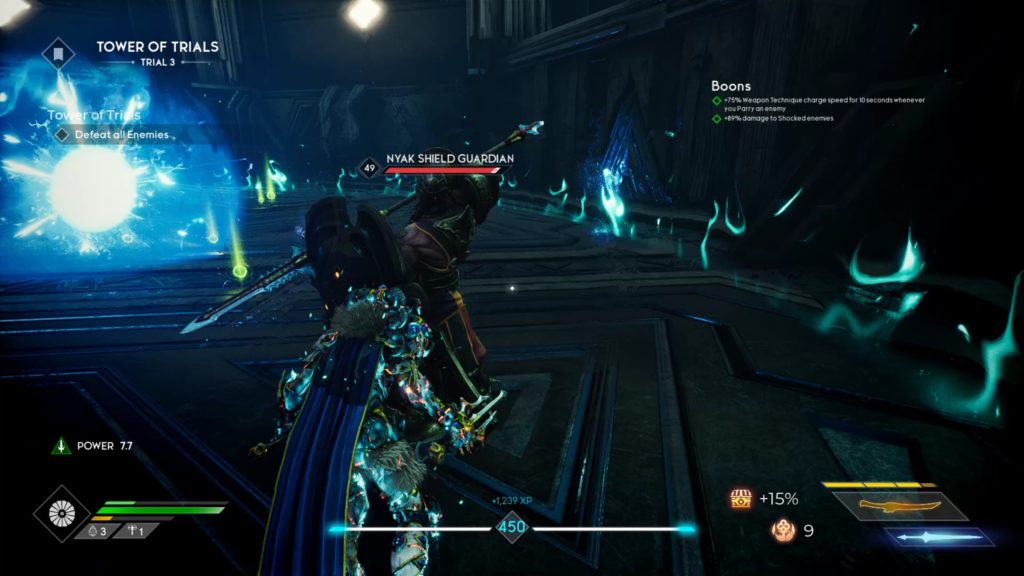 Speaking of which, new Dreamstone missions have been added, set in the Fire Realm. These small mission lines reward you with a ton of loot for completion and now go all the way up to level 60. Booting in with the level 50 character provided for the review, I was surprised to see just how much playable content there is now. From the Hunt Missions to the Tower of Trials and the Dreamstones, there’s a lot to get your teeth into.

Whether you have Fire & Darkness or not, you will get to experience the Lightbringer update. This free add-on introduces yet another new mode, designed primarily for co-op. In Lightbringer, you must defeat the Heart of Darkness and restore light to the Realms. First you need to fight through an area infested with darkness, igniting beacons to grant a little haven of light. Eventually you’ll reach your first encounter, and free a portion of the Sanctum’s Light.

CHECK THIS OUT: Sonic Colours Ultimate is flash but fun so far

This must tgen be escorted back to the Amplifier, where you’ll face wave after wave of enemies until you finally cleanse the realm and restore balance. Spend too long in the darkness and you’ll pay for it, so the emphasis here is on working as a team. You need to clear the adds fast to survive. It’s a fast, exciting game mode that I’ve had a lot of fun with. It’s not a big departure from the existing content, but it’s a little more variety. 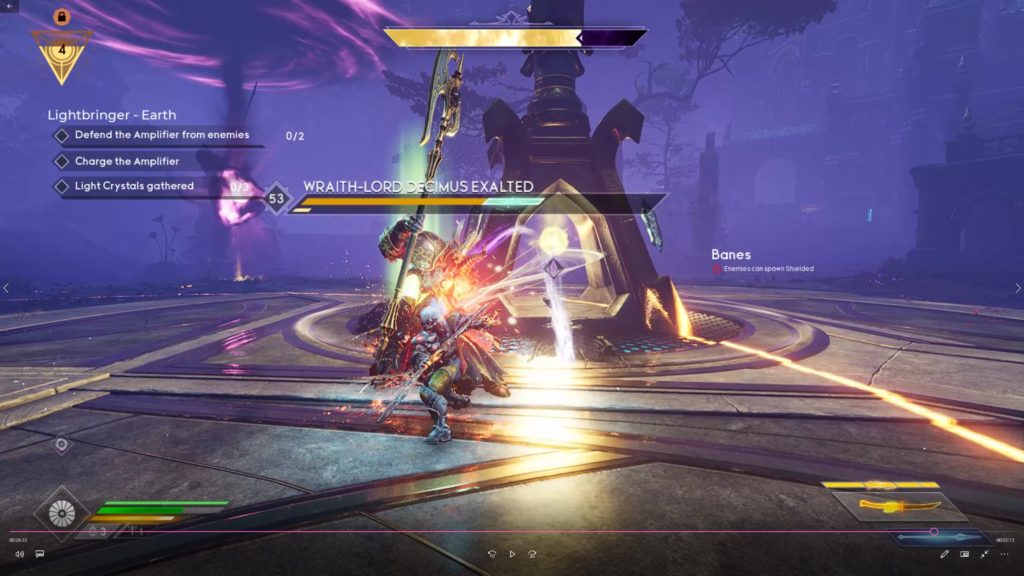 You can also earn Cursed Items as loot, which will need to be cleansed by completing associated challenges. It’s clear that Gearbox are just trying to provide reasons to stay invested here. There’s more to grind and unlock, more to strive for with new skins and gear. Anyone already invested in Godfall will have a blast here. Anyone who isn’t, well, this makes the package overall a lot more robust.

With the level cap increase to 50 and the ability to earn “Ascended levels” thereafter, there’s even more reason to give Fire & Darkness a try. The fact that Lightbringer is free on top of this just makes this DLC even more worth a look. It would have been nice to see some new Valorplates added that mix up the formula a little, and I really wish there were more cosmetics beside just colour washes, but it’s still a decent slice of content. If you’re not a fan of Godfall, there’s not much here that will change your mind, but the effort is apparent. If you are a fan, then Fire & Darkness is a total no-brainer.

If you're not a fan of Godfall, there's not much here that will change your mind. If you're a fan, though, Fire & Darkness is a total no-brainer.