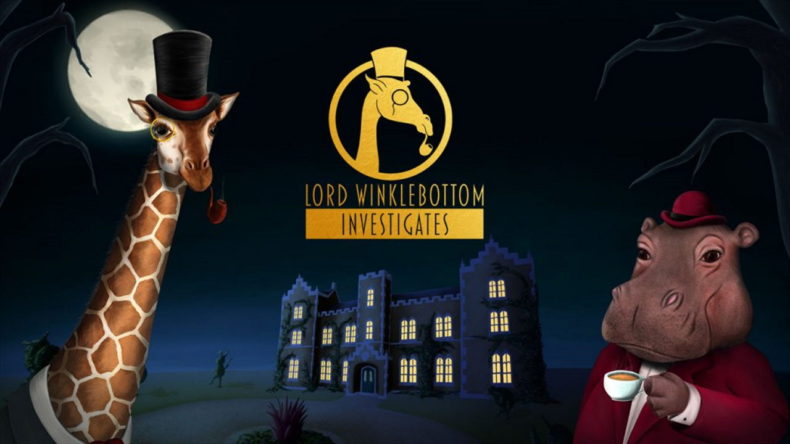 Sometimes a game comes along, where the concept just makes you grin, and Lord Winklebottom Investigates is no exception. Here is a mysterious whodunnit mixed with a traditional point-and-click adventure, where the world is filled with anthropomorphised animals, with traditional British accents. Oh and the lead character just so happens to sound like an ailment that would cause a bit of embarrassment at the doctors. All major ticks in the right boxes as far as I’m concerned. And for the most part Lord Winklebottom Investigates lives up to those expectations, although occasionally it does get bogged down in its execution.

The premise is, you are the titular Lord Winklebottom, world-renowned investigator who is also a giraffe. You and your trusty hippo partner Dr. Frumple are famous for solving mysterious cases. You get a message from an old school friend, Gilfrey, to come and visit him on his island for a big announcement. After making your way there, you realise that poor Gilfrey has been murdered, and vow to get to the bottom of what happened. Now all the invited guests and mansion staff are suspects and it’s up to you to piece together the mystery.

The main gameplay then is that mix of whodunnit mystery solving, and the kleptomania mixed with contrived item manipulation that is the bread and butter of the traditional point-and-click adventure. You’ll be chatting to guests to try and uncover what happened, and notes about all the characters of interest are automatically captured in a handy notebook you can reference at any point. You’ll then be picking up and interacting with items and the environment, to help explore the mansion further and uncover more secrets which will develop the dialogue options with characters, to help unpick the mystery. 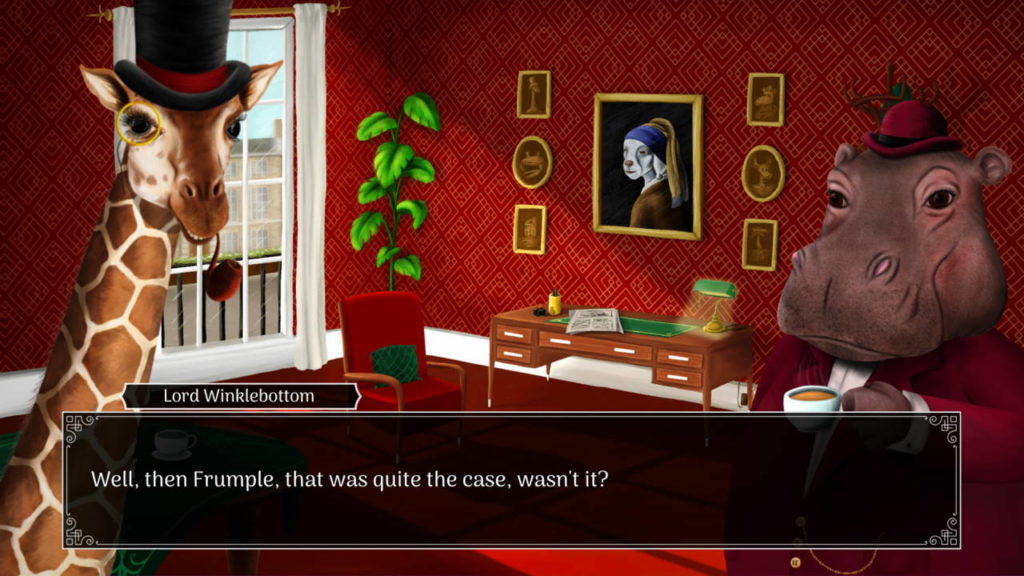 In this sense Lord Winklebottom Investigates starts very strongly, from the Prologue puzzles before you arrive on the island, to the initial exploration and puzzle-solving in the mansion itself. You’ll fall into a familiar rhythm of the point-and-click and the items you interact with tend to have an immediate purpose to solve a puzzle. It’s all satisfying, and the right side of challenging without feeling overwhelming or frustrating.

The issue some might have – and I certainty did until I understood what was going on – is how Lord Winklebottom Investigates deals with some of the puzzles in the middle or latter part of the game. Because of the confined space of the mansion, some things you’ll need for later in the game are visible from the start. The change here is that rather than letting you pick up an item that you’ll keep on you for much later, Winklebottom won’t do that until you’ve progressed the story enough to know why you need to bother picking up an item. But then bizarrely some items he will pick up right away, even if you don’t know why you need it yet.

What this means in practice is you can think you’ve explored everywhere for the solution, interacting with everything, and yet actually what you need to do is return to something you may have already interacted with, but now you know it’s worth picking up thanks to a conversation or observation, and you will now pick it up. What’s more, generally you can either interact or look at an item or point of interest, and sometimes doing one instead of the other will be the trigger to progress the “logic” to let you now pick up a new item. As such it requires a bit of rewiring of your brain on how traditional point-and-clicks work. 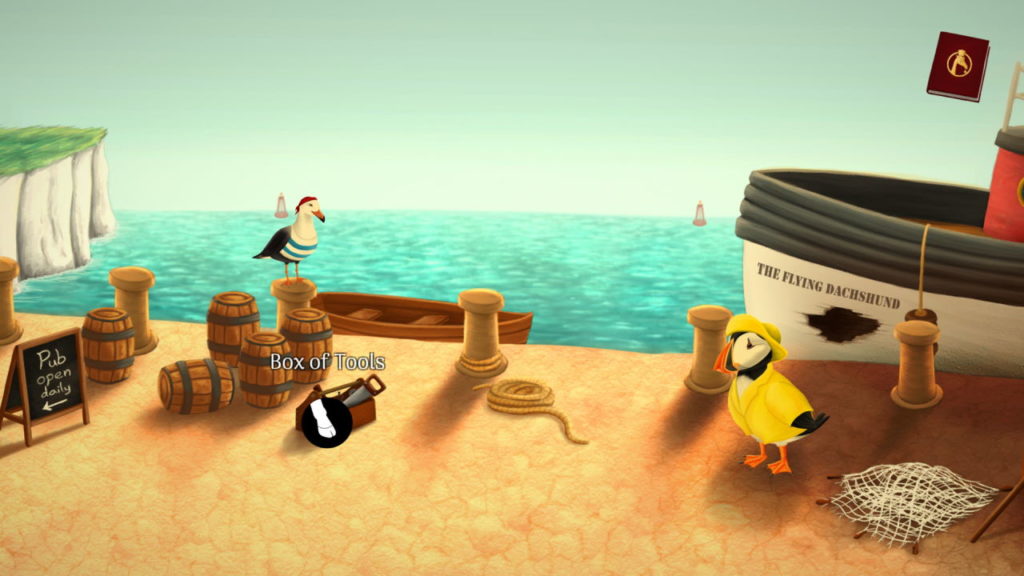 The point-and-click puzzles, do, thankfully fall into the more sensible bucket, rather than some weird tenuous logic. Often it’s relatively clear how to progress, and the solutions often make sense, which makes the game feel more enjoyable than frustrating. More often than not the blockers I encountered were because I hadn’t triggered the logic, but I generally knew what the game wanted me to do with the puzzles. There is a hint system, but these are more general than specific, telling you the next key puzzle to solve, rather than the smaller steps that might lead up to it, so it still requires your brain to overcome.

The whodunnit aspect is perhaps more passive than people may expect. It’s more that it serves a narrative for the main point-and-click adventure. For example the automatic note-taking will confirm whether a character is still a suspect, based on your interactions, rather than it being based on your opinions or decisions. It’s fine, because Lord Winklebottom Investigates has a story to tell, and so needs to maintain a structure to do so. Just don’t expect to adopt a Poirot role yourself in solving the murder mystery.

Lord Winklebottom Investigates doubles-down on its animal world and the stereotypical accents and tropes of its characters. It isn’t afraid to laugh at itself or poke fun at the genre the game adopts. The interactions and conversations are done well, as is the voice acting that delivers them. It’s harmless, silly nonsense, but I found myself not wanting to skip conversations because they were quite fun to listen to. Even if my hippo companion wouldn’t let it slide that I made his cup of tea wrong right at the start of the game. 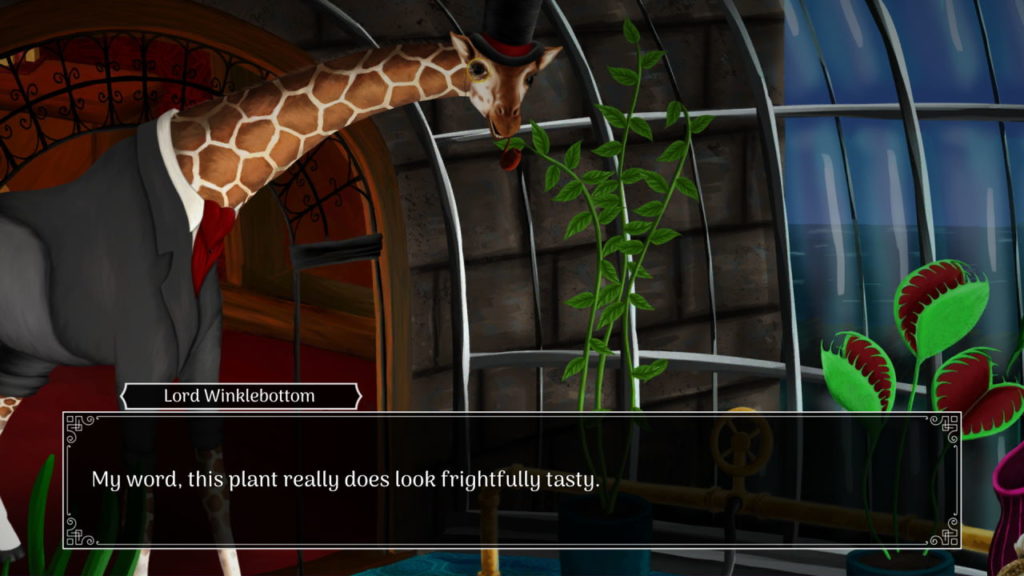 The controls are another interesting point. It plays very much with PC controls in mind, as on console you use the control stick to move the cursor on the screen to interact with people, items, and scenery. Being able to use the D-pad to select between conversation choices, or to select between interacting or looking at an item, would improve accessibility, as I often found myself overshooting the cursor selecting between options, making it fiddly at times. There also aren’t any cursor sensitivity options to tweak either which would prevent this. The good news for those looking to the Switch version is that touch-screen controls do work and that allows for more precise selections that aren’t available on the other console versions. As such players may get more enjoyment in handheld rather than docked.

Lord Winklebottom Investigates looks, sounds, and even plays like its own unique game. The world and humour are a big draw, and the puzzles themselves do make sense and aren’t obtuse. It will need you to appreciate the way it treats its logic progression to avoid frustration, but if you can do that, then the game is a fun point-and-click experience with plenty of charm, humour, and style.

Lord Winklebottom Investigates is a charming, funny point-and-click adventure, you'll just need to rewire your thinking to navigate its logic.