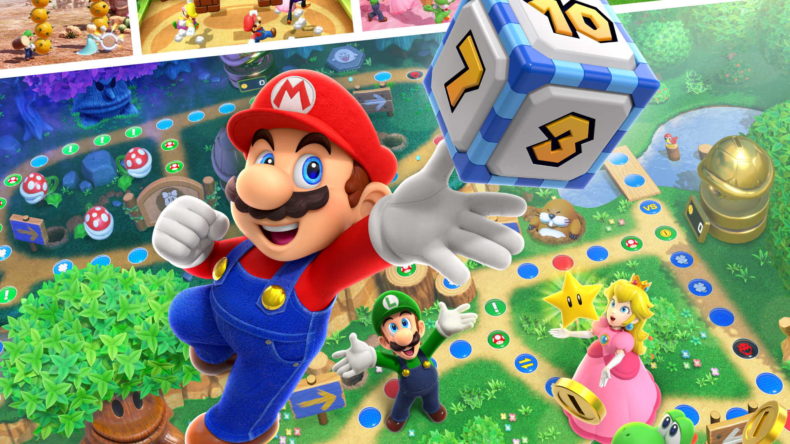 It’s going to take a while for the effects of that new Nintendo Switch OLED Model to wear off. But I have to hand it to Nintendo’s marketing department, because releasing a Mario Party Superstars title right after a new, gorgeous looking screen version of the Switch hits, with a better stand for table-top play… well, it’s a stroke of genius. On top of that, after the phenomenal Metroid Dread it’s an opportunity to see if that screen truly can convert me to being a handheld player. Is Mario Party Superstars good enough to do that?

In truth, it’s going to be a tough sell if you’re not a fan of the series already. If you’ve played all of the games before, then this will all be very familiar to you. That said, it’s also a bit of a throwback, and not just because of the courses and mini-games on offer. There’s a more “classic” Mario Party feel to Superstars, and while it’s very easy to “luck” your way to victory, some fan favourites return, such as the Bowser interruptions. 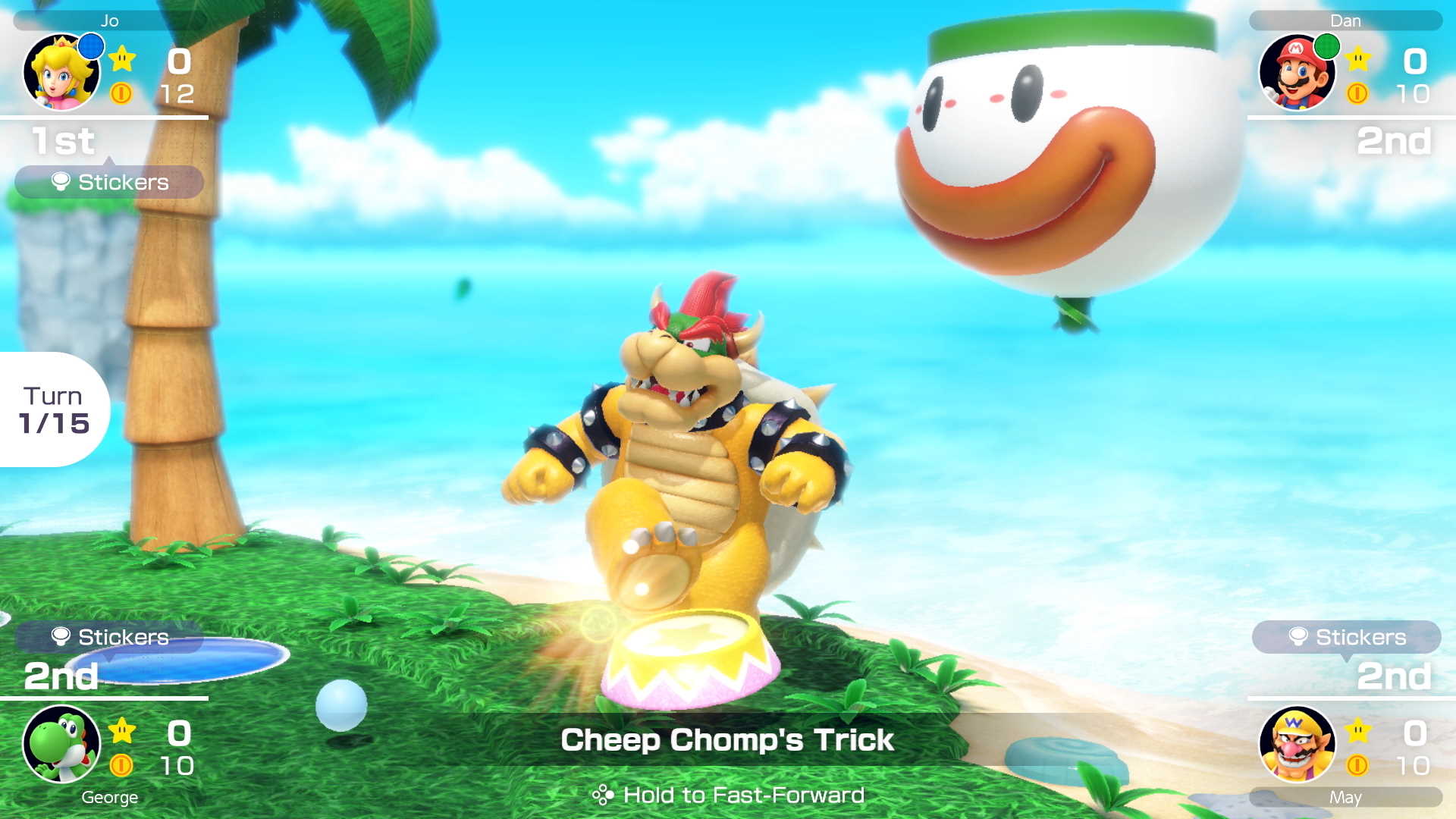 What you’ve got here, then, is akin to a remake of some of the Nintendo 64 Mario Party titles with five boards completely revisualised for a 2021 console. There’s Peach’s Birthday Cake and Yoshi’s Tropical Island from the first Mario Party, Horror Land and Space Land from Mario Party 2, and Woody Woods from Mario Party 3. To be completely clear: all five of these boards are entirely “new”, visually. It might be an odd thing to say, but the boards are remakes of those originals boards, keeping everything about them, for better or worse.

CHECK THIS OUT: How to keep everyone alive in The Dark Pictures: House of Ashes

I say that because some of the earlier games were pretty basic, and while many will enjoy the classic feel to Mario Party Superstars, a board like Yoshi’s Tropical Island, for example, isn’t as much fun as you might remember. For starters, the “happening space” will cause the Star location to move, but there are only two places for the star to actually appear on that board. This means anyone can roll the dice and land on the “event” space and move the Star to the opposite side of the island, whether intentional or not. 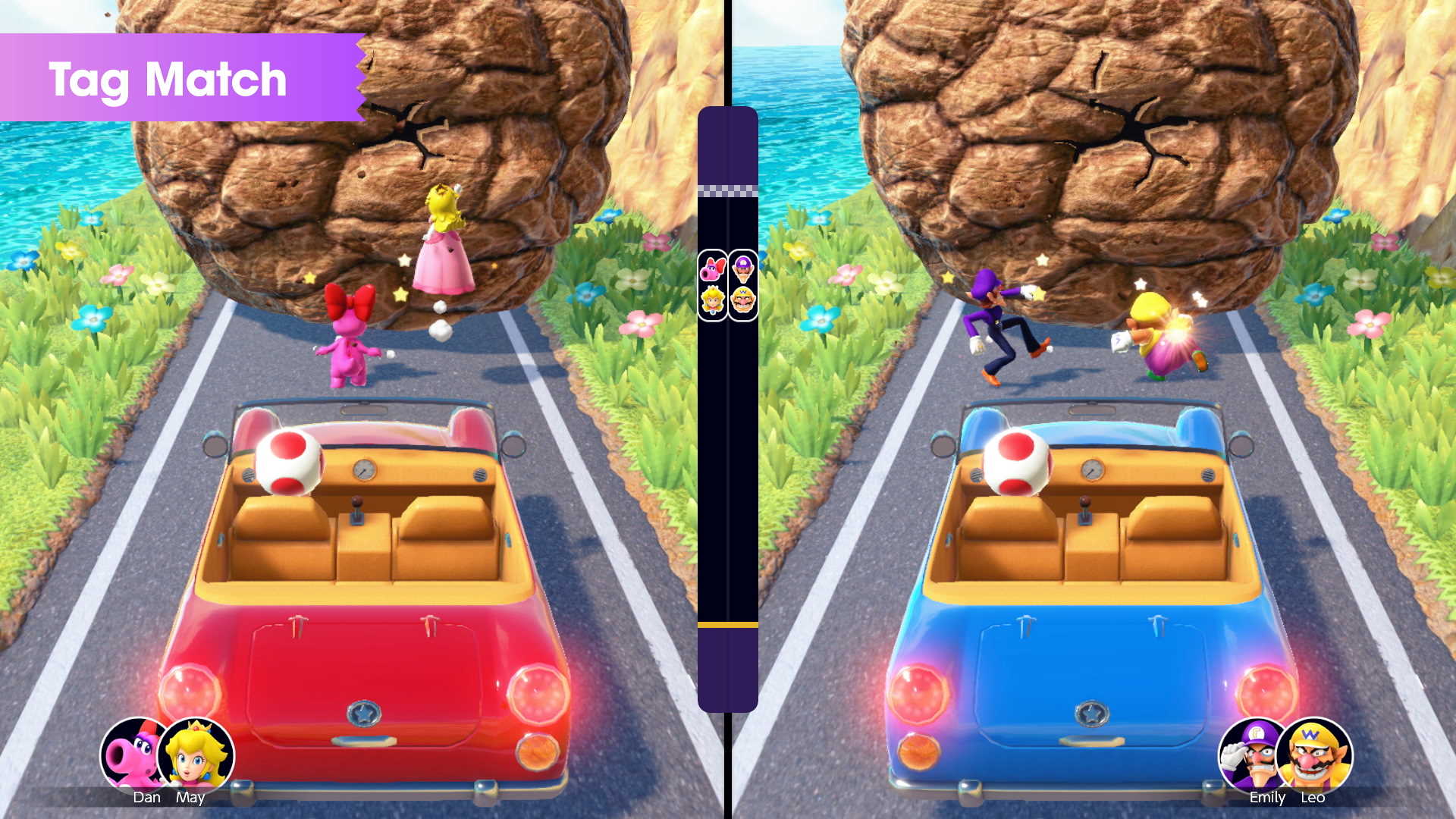 But that’s the thing, really. This game, and indeed the boards on it are a throwback to those older games. It might be a new collection, but it’s very much a nod to the past. There are no motion controls, and while they’re remade boards, there are five of them, up from the four of the last title, Super Mario Party.

That’s not the only change, and while it’s a return to the simpler times of Mario Party, you will now need to pay 20 coins for a Star, not 10. It’s a small change, but it makes Stars harder to get, and adds value to the rest of the board. When a Star only costs 10 coins, it’s rare to pass one without affording it. Even against varying difficulty-based AI opponents, I noticed times when they’d be forced to pass as they hadn’t won enough mini-games, or been lucky enough on the board spaces. 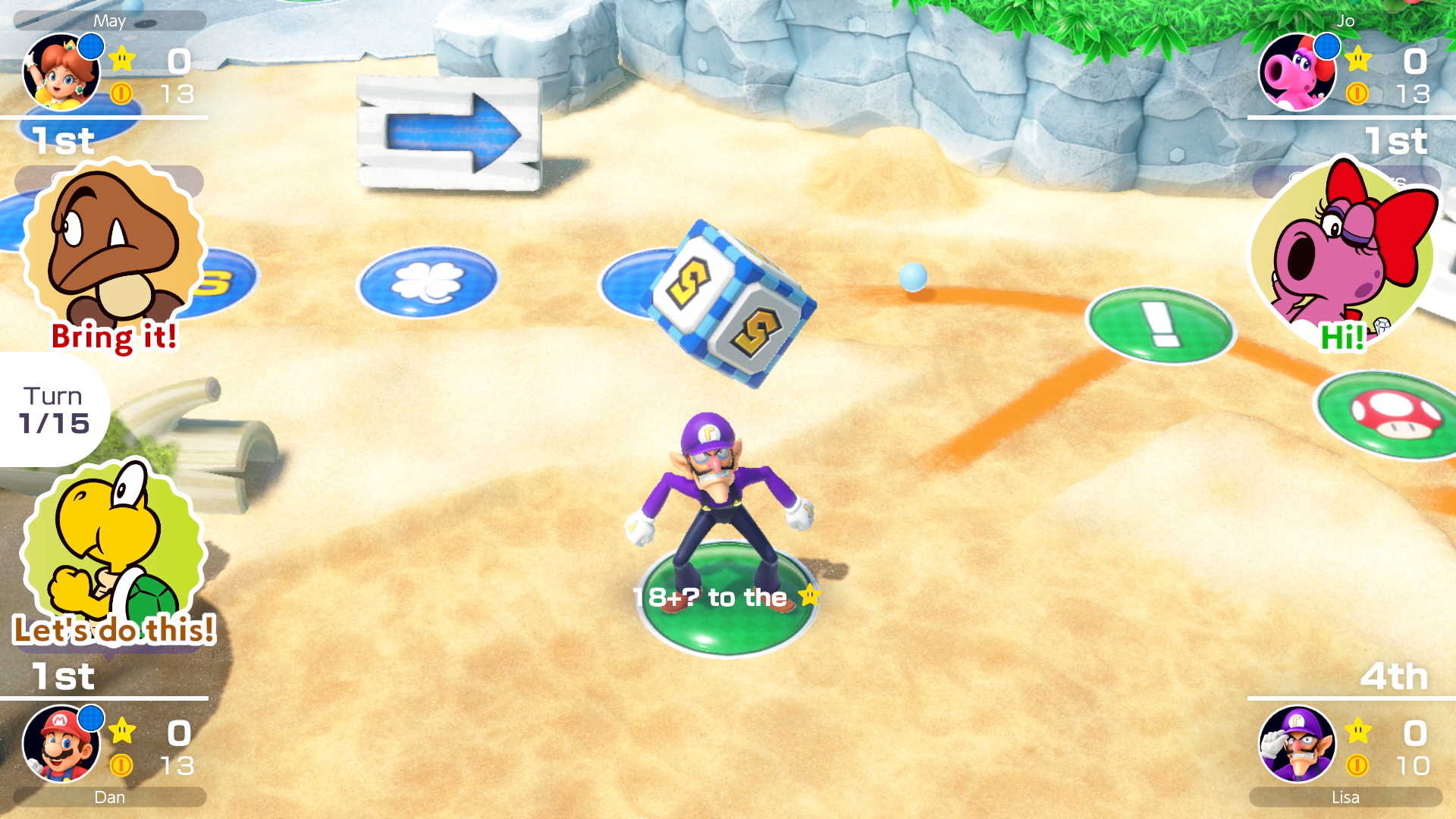 Online play is perhaps the biggest draw to Mario Party Superstars, however. All modes support online multiplayer, so you can just connect with pals and play some minigames, or do a full 30-turn game. Almost unbelievably, there’s even matchmaking for solo players who just want to face off with random people. If you do play with friends, though, it saves after each turn so you can easily take a break and suspend the match for another time. Again, it may seem like a standard feature for most games, but it’s great to see Nintendo getting there with this kind of functionality, finally.

CHECK THIS OUT: How does Monster Hunter Rise look on PC?

There’s 100 minigames on offer, and you can dedicate time to those if you fancy in Mount Minigames. There’s even multiple options within this mode. I’m not going to list them here, and I don’t know your favourites, but going back to the basics with simple stick and button controls means some classics are here, for sure from the first 10 titles. A nice touch is the fact you’re shown which game things are coming from, which really makes this feel like a celebration of Mario Party. There’s loads of stickers to collect, too, which lets you communicate when playing with online friends to leave cheeky messages, especially if you didn’t manage to get to play as Birdo because someone sniped her first. 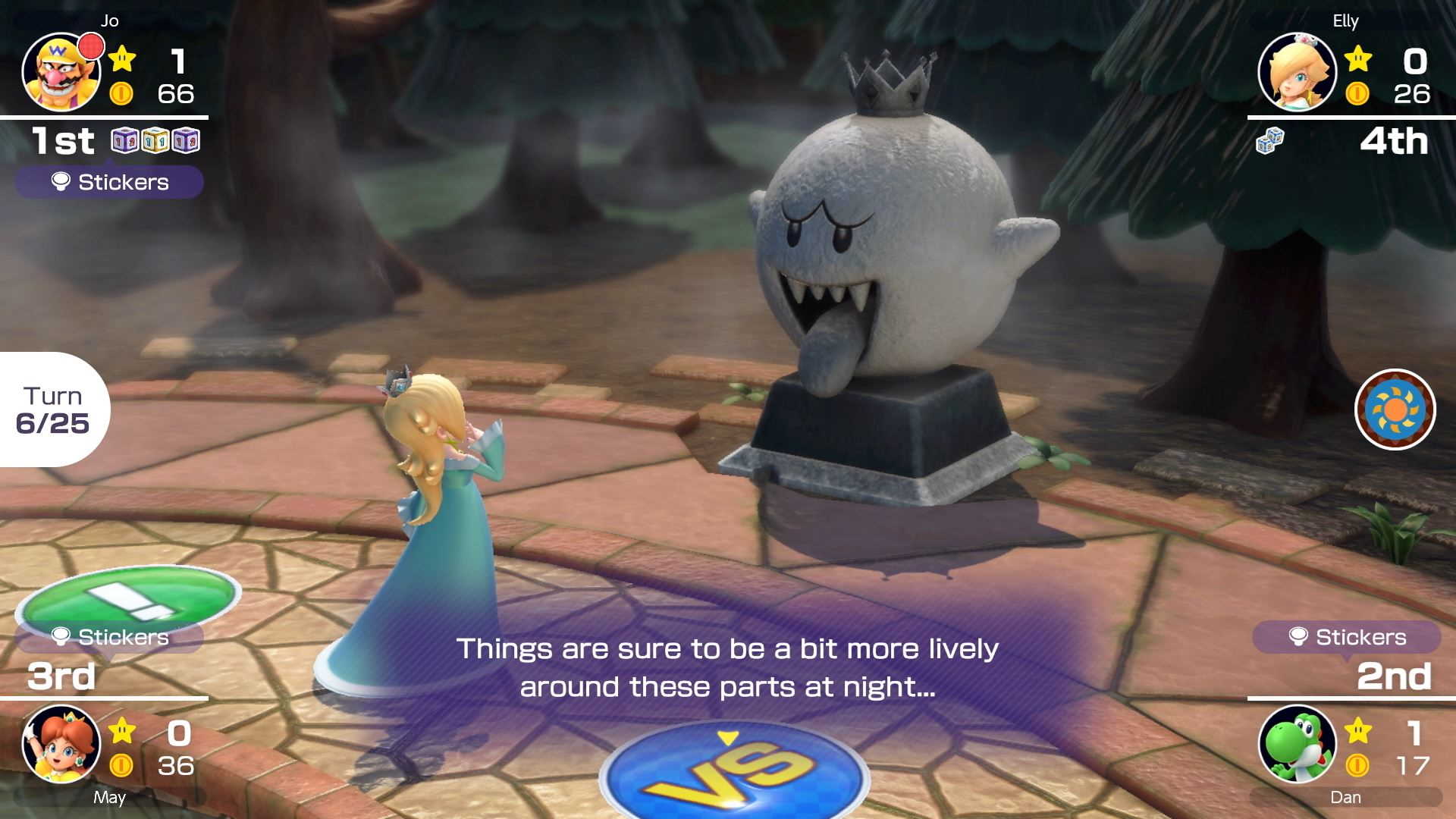 Mario Party Superstars is looking back to move forward. It’s tough to know what more can be done with a series like this, aside from adding new boards from more of the older games. Nintendo hasn’t been averse to doing something like that, with Mario Golf: Super Rush getting free courses added after release. And while five boards is better than the last game, more boards are always going to be welcome, especially with the online additions this time around.

It seems ridiculous it’s taken this long for Nintendo to add online to a Mario Party title, but that’s where we are. With the ability to save your game and continue onwards, it makes me almost think of “postal chess” from the old days. Sure, you have to be there to play Mario Party Superstars, but the fact that hours at a time aren’t the only way to play anymore is a grand thing indeed. For older fans, this is will be a nostalgic trip with modern updates to make it feel like a series at home in 2021. For everyone else it’s one of the best party games out there, even if it remains an experience where your luck may vary. It won’t change anyone’s mind, but for those of us who enjoy it, there ain’t no party like a Mario Party-party.

Some boards are less exciting than others
Still RNG: The Game

Mario Party Superstars won't change anyone's mind, but for those of us who enjoy it, there ain't no party like a Mario Party-party.