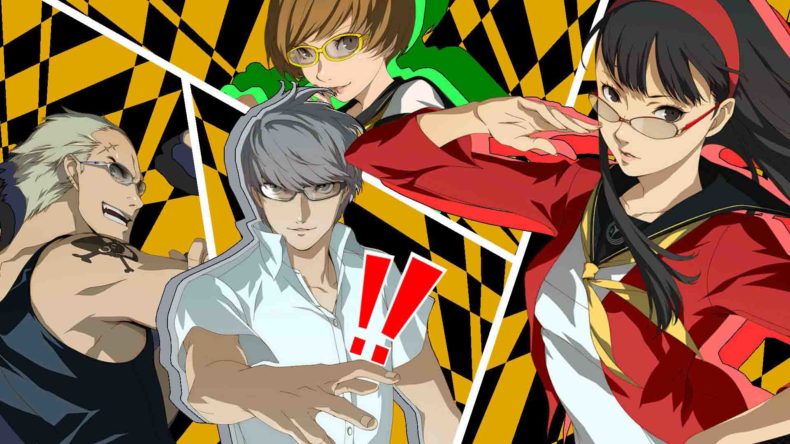 For the uninitiated, what we have here with Persona 4 Golden on Switch is the best possible version of Atlus’s finest blend of dungeon crawling role player action, quasi-life-sim and dark murder mystery. The magnificent and popular Persona 5, thanks to the acclaim it received, may well have been the first taste many players had of the franchise, however I would argue that after revisiting the adventures of the Investigation Team, this remains the pinnacle of the series. With some little quality of life alterations, this is now probably the best way to experience it, especially on Switch with the benefit of taking it out on the move, as I have found myself doing just like back during the Vita’s heyday.

Atlus has created an experience that has an addictive, bewitching quality that draws you in and refuses to let you go. The structure and writing, not to mention the perfectly balanced and simple to pick up combat system, means that each separate part of your vicarious on-screen life is equally compulsive. The opening sections show you quite quickly the myriad dark directions that Persona 4 is willing to take you. 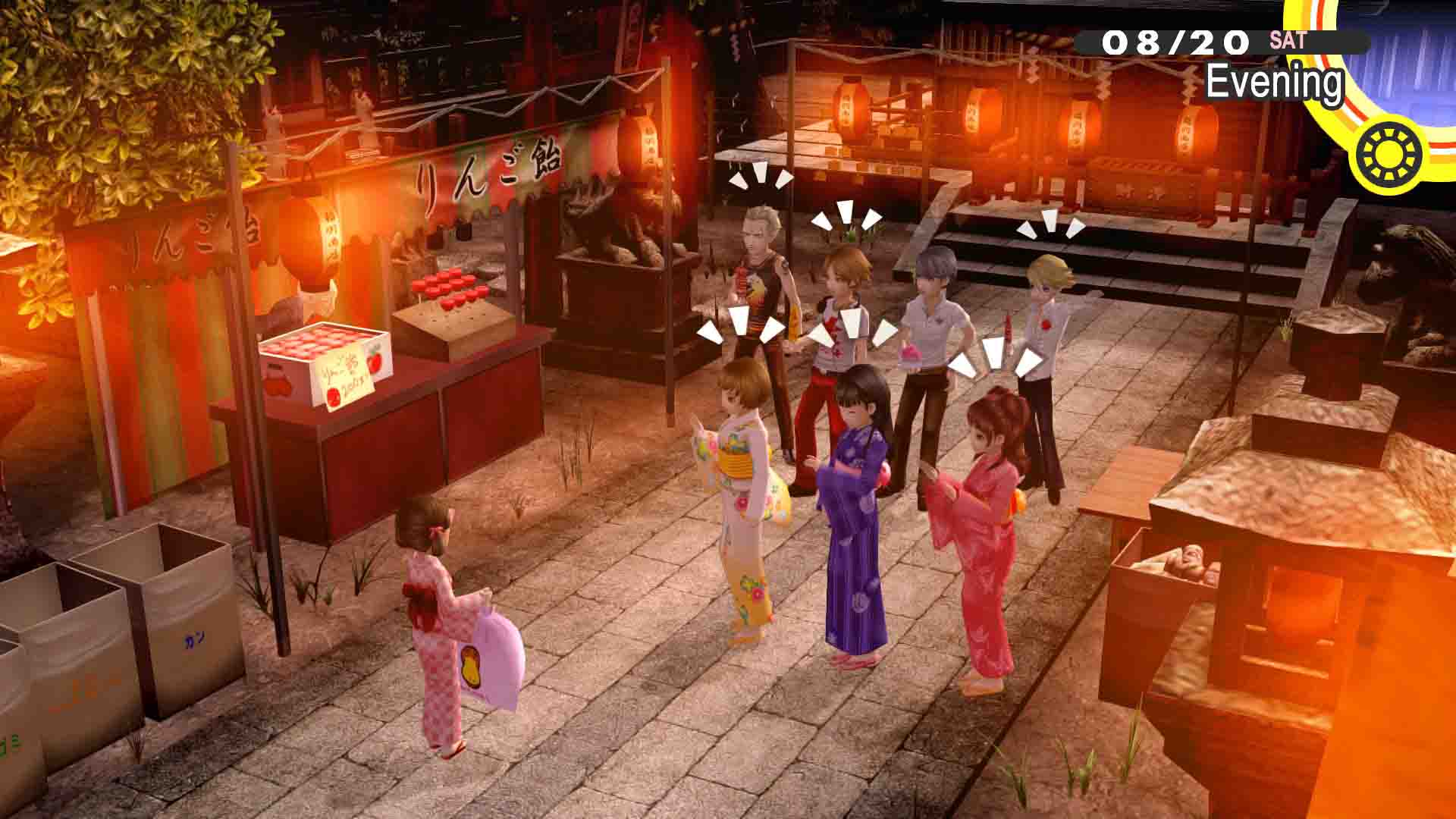 Your protagonist is essentially a fish out of water city boy sent to live with his uncle and young cousin in the idyllic, super-Japanese village of Inaba. But things aren’t what they seem in this ostensibly charming little burg. Your uncle is a hard boiled, overworked cop who is reduced to allowing the television raise his kid. The other students you befriend have a plethora of issues going on which you begin to discover when you scratch beneath the surface and start to develop the social links that are so crucial to improving your performance in the dungeon sections.

And then, the murders and disappearances begin. A hogtied corpse, suspended from telephone wires is discovered. It is a shocking, gruesome sight, and proof that there is a dark underbelly at play in Inaba. Your protagonist buddies up with a ragtag group of peers, each with hitherto undiscovered special abilities. This Investigation Team, with the help of the unsettlingly cheerful anthropomorphic bear-creature Teddie, find out that they can track missing people by venturing into the television set at midnight. In this bizarro alternate plain the gang traverse multi-layered dungeons where enemies known as Shadows patrol the gloom and are fought in excellent turn-based combat. 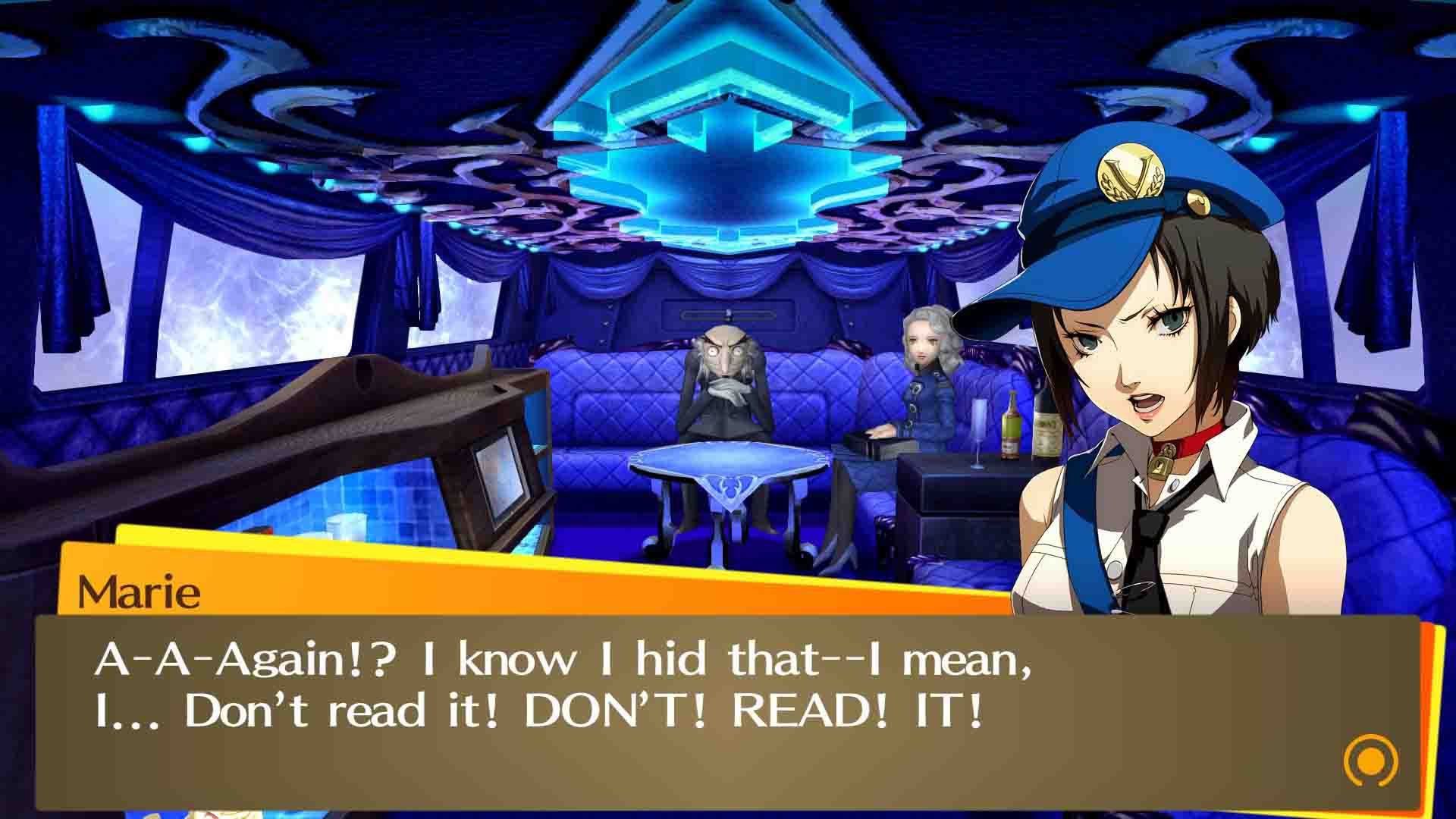 Your abilities in these sections are governed by the latent powers bestowed upon each character via their Persona – mythical entities that can be summoned to carry out a number of elemental and status-altering attacks and spells. As the action progresses you can enter series mainstay The Velvet Room where creepy patron Igor allows you to fuse different Persona types together. Melding an effective Persona is dependent on your Social Links and lends everything a real sense of personal attachment and loyalty to certain creations, because of the time you have spent developing meaningful relationships in your school and extracurricular pursuits. The dungeons themselves are also manifestations of the victims and their captors, with the Shadows within and even the architecture and environments directly borne of the trauma that is unfolding.

Gameplay runs over an entire virtual calendar year, which in terms of your own investment should see something like a 60-hour commitment. But don’t be intimidated by this – it is so expertly put together that it never becomes boring. You will find yourself enjoying a good old grind, thanks to the random nature of the dungeons, and the way every run-through can throw up new enemies, secrets, treasure and Persona-enhancing opportunities. The social aspect is equally moreish, given the sheer amount of things you can do in and around Inaba, and the captivating stories behind the characters you grow to know and love – both romantically and platonically. I put close to 100 hours into the thing the last time I played it, and I don’t mind one little bit doing that again with Persona 4 Golden Switch. 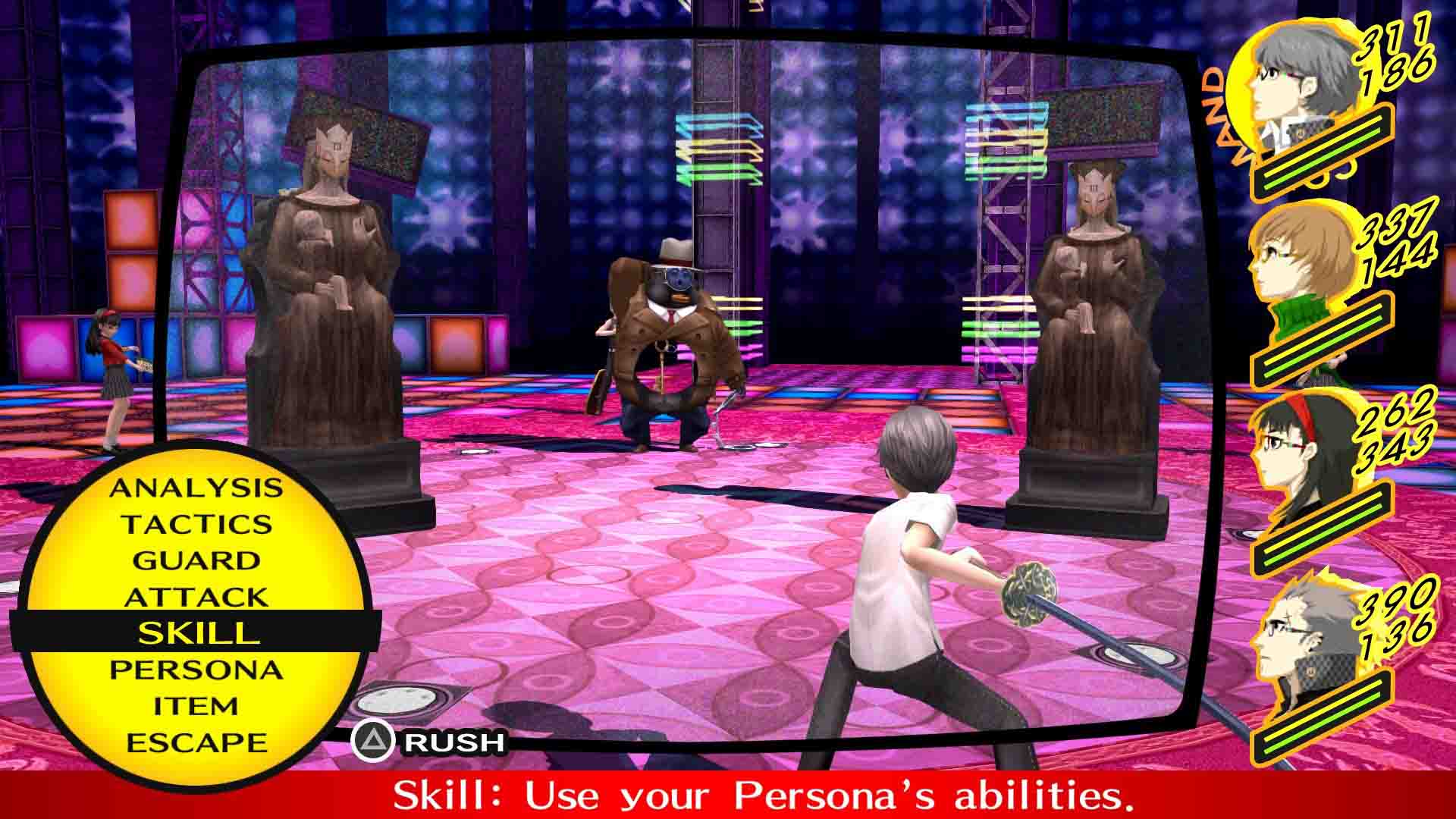 There is very little difference between Persona 4 Golden Switch and the already great Vita version, apart from the ability to save anywhere on the fly, and a feature where you can look back on previous social interactions and conversations from an album in your room, even changing your answers to see how things play out. This feels like something that could be abused to retrace your steps and cheat, rather than use your own intuition and skill to carve your pathway through the year of your own accord. It is nonetheless a cool feature. The graphics have apparently been given an HD lick of paint, but this was never a tour de force during the 3D sections, and the animated and still cutscenes are the usual sublime quality you would expect from Atlus.

It can sometimes be hard to resist letting the brakes off completely to engage full hyperbole mode when you are writing about something that you not only love almost intimately, but desperately want other non-believers to adopt and fall head over heels with. I feel the same way about a few things – pro wrestling, 90s football, test cricket – and was pertinently reminded today by my wife just how much a lot of my obsessions fly over her head. But I urge you, dear readers, to not let Persona 4 pass you by AGAIN. This is one of the best games of all time, is being put out at a price point just shy of twenty quid, and is one of the best ways you can kick off your gaming in 2023.