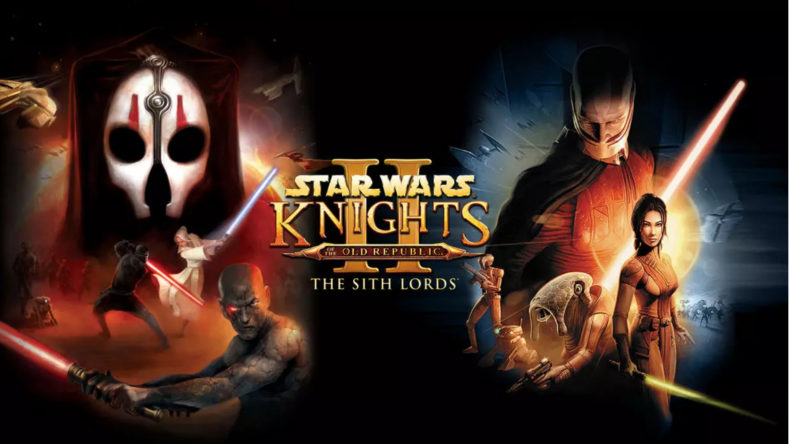 Just over six months ago, I was lucky enough to play and review Star Wars: Knights of the Old Republic on the Switch. Despite being almost 20 years old, I was blown away by how exceptional it felt to go back to that spectacular sci-fi story. Sure it’d aged a bit mechanically and wasn’t the looker it once was, but getting to play arguably the best game Bioware have ever made on a handheld just felt magical. If one incredible lightsaber-filled adventure isn’t enough for your Switch collection, you’ll be happy to hear that Star Wars Knights of the Old Republic II: The Sith Lords is ready to steal away your hours.

After the events of the first game, the Jedi Order lies in ruin. The Sith are well and truly ruling the galaxy, and those good guys with their funky glowing swords are nowhere to be seen. Waking up after an attack on the ship they were traveling on, our protagonist is injured and alone. Exiled from the Order years ago, your soon-to-be character has some power over the force but has slipped under the radar of the big bad Sith. This doesn’t last for long though, so with help from a few allies our hero needs to escape capture and find any remaining Jedi to save the galaxy. 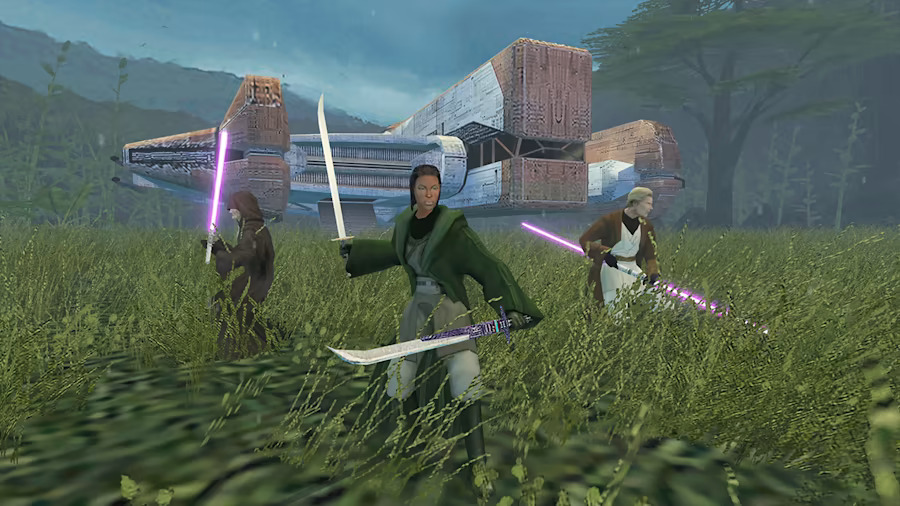 Just like last time, you do this by exploring planets, making moral choices and getting in a few scraps along the way. Fighting enemies in Knights of the Old Republic II involves some hidden D&D dice rolling in its laser blasting and lightsaber swooshing. Each attack a character chooses will be unleashed every 6 seconds, with options that boost damage, accuracy or even use the force.

Unlike the original KOTOR your character begins the game with force powers. This means there are more options in combat from the jump, and early encounters are much more enjoyable because of it. Instead of just firing off your blaster at every droid or mercenary you see, you can force push them, stun them or even fire lightning bolts at them. Some of these powers are associated with a certain side of the force though, so don’t expect to choke out your enemies if you’re a good guy.

The industry-shaking morality system makes its return from the first game, and is as compelling as ever. Throughout Knights of the Old Republic II you’ll be greeted by a plethora of conversation options that will decide if your character is good or evil, which often have some pretty significant consequences. Do you want to join the peaceful aliens in their slow quest to restore a planet’s ecosystem, or does it make more sense to ally with the megacorp that can make money from its resources and make it worth traveling to? You can always just choose the options that make you all good or evil, but it just isn’t as much fun as weighing up the arguments and developing your character naturally? 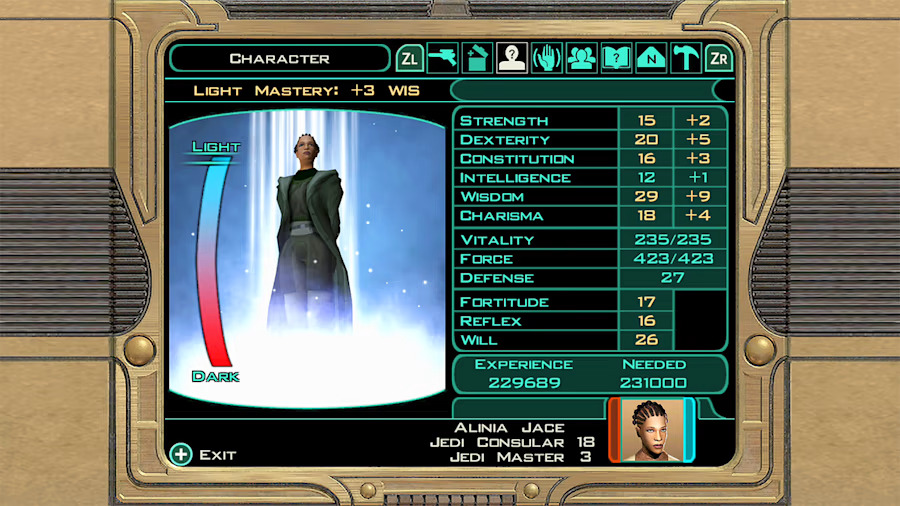 No RPG is complete without a bit of character progression, and there are plenty of opportunities to upgrade your party in Knights of the Old Republic II. Leveling up will give you stat points, as well as ability points to place in different useful categories. If you want to use your hacking to make your way into a restricted area you’ll want to upgrade your computer skill, or perhaps you’d rather master explosives and disarm mine and use them yourself against a room full of enemies. There are a ton of options to choose from, that will each allow you to progress through the game in a different way.

In my review of the first Knights of the Old Republic I mentioned my love for the best card game in RPG history, Pazaak, and thankfully the sequel delivers even more compelling card content. The Blackjack ripoff might not sound like the most thrilling game in the world, but Pazaak has a few tricks up its sleeve. Each player has a deck of cards that they bring to the game, which can be played at any time. Most of these add or subtract from your current score, and will win you a round and some precious credits when played correctly. You’ll be able to buy shiny new Pazaak cards throughout your adventure, and if you’re anything like me you’ll accidentally lose hours to this side hustle without realising.

If you’ve played Knights of the Old Republic II before, chances are that you just want to know if the game runs well on Switch. Well I can happily confirm that once again Aspyr have knocked it out of the park. Loading times are low, the framerate is steady and the game even looks a little nicer than it did on the poor old Xbox. Getting to play a full sprawling Bioware game on a handheld still fills me with glee, and I absolutely wouldn’t want to play it anywhere else. 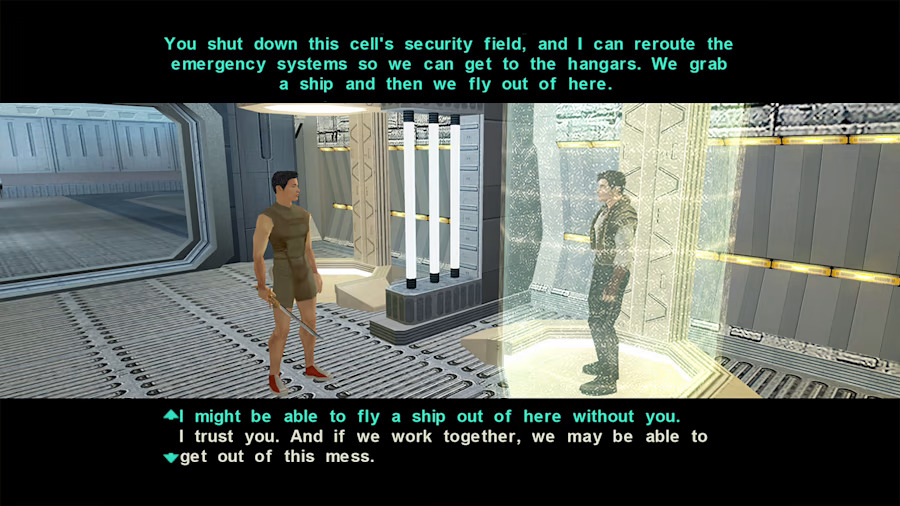 It’s hard to pinpoint what about Knights of the Old Republic II: The Sith Lords makes it feel inferior to its predecessor, and in the end I think the main issue is that the story just isn’t quite as spectacular. It’s a shame because there are also plenty of improvements. The intro does a much better job of teaching you about all the complex systems of the game, and the early game combat is much more interesting than missing five shots with your blaster in a row – but ultimately the narrative that drives you through the game is less epic and because of that also feels less like Star Wars.

Star Wars Knights of the Old Republic II: The Sith Lords is a phenomenal RPG that is ported to the Switch with finesse. From start to finish I was hooked by the delightful D&D combat, the intense moral quandaries and the delightful characters and narrative. If not for the greatest Star Wars game of all time releasing before it, Knights of the Old Republic II would be remembered (quite rightly) as one of Bioware’s greatest accomplishments.

Star Wars Knights of the Old Republic II: The Sith Lords is a fantastic RPG, and is simply a joy to play on the Switch.