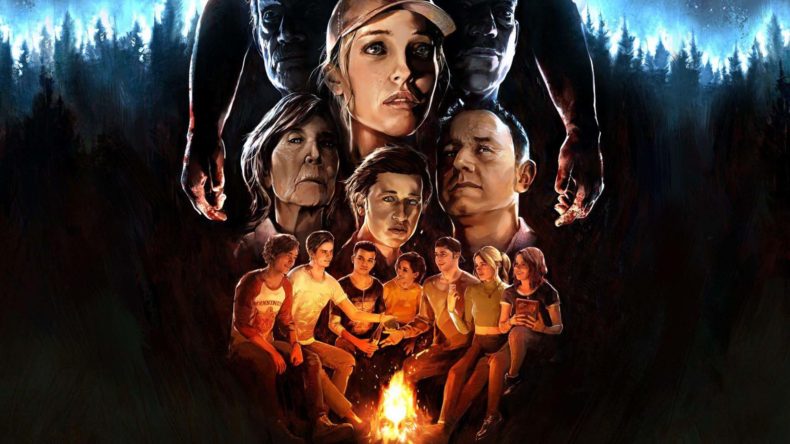 The Quarry developer Supermassive Games tends to split opinion with its brand of interactive horror titles. However, most people can agree on one thing: Until Dawn was great. Back in 2015, it gave us the freedom to decide the fates of teens in what felt like a horror movie. People could live or die by the decisions we made. It was popular, engaging, believable, and, therefore, fun in a macabre way. And nothing, be it VR spin-offs or The Dark Pictures Anthology has quite topped Until Dawn from its pedestal. But with The Quarry, Until Dawn may have some stiff competition, and that’s a very good thing.

To start with, you get a very similar vibe as Until Dawn in The Quarry. A group of Summer Camp counsellors end up spending an unexpected extra night all alone in Hackett’s Quarry after all the kids have left. A great excuse for one final night of partying, right? Well, as we begin to see, there’s something rather dangerous in the woods around the camp, and things are going to get scary. There will be blood, and some tough decisions are going to have to be made if all nine counsellors want to live to see the light of the day.

The first thing you really feel when playing The Quarry is it feels grander than the more recent Dark Pictures titles. Hackett’s Quarry itself covers quite a large area, with 15 different areas where the action takes place. A new addition is a basic map that allows you to keep track of where everyone is at any point in their adventure. It doesn’t serve any other purpose, but adds to the scale of the area, and shows just how isolated certain characters can end up being. The game itself is longer too, taking 8-10 hours to complete depending on how much exploration you do, and how many people you end up keeping alive. 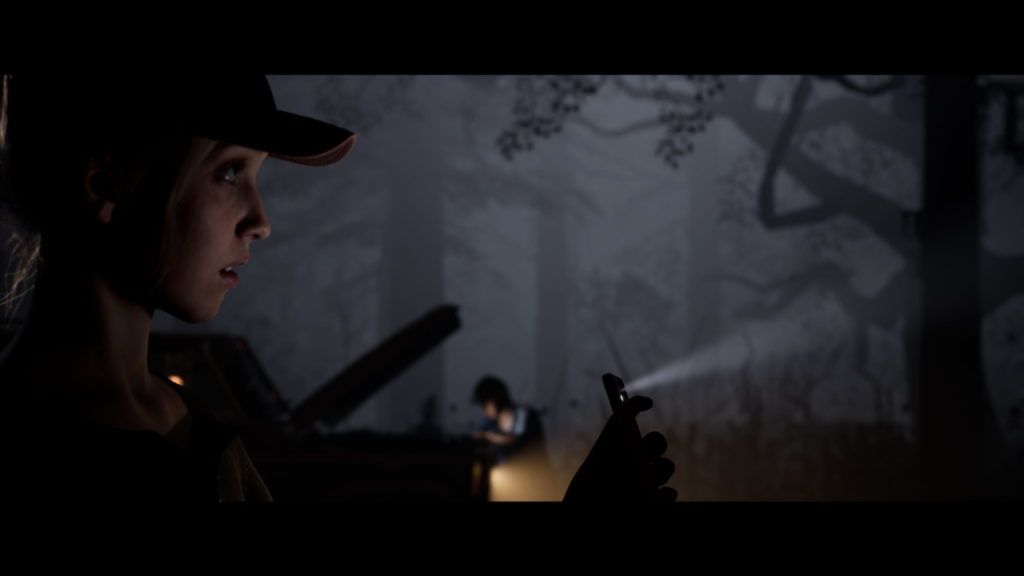 Exploration is rewarded with various different collectibles. There are the normal clues to bolster the backstory of The Quarry, but there’s also a special type of clue called Evidence now too. Evidence provides proof of what is going on and can affect the outcome of the ending of the game depending on how many items you discover. The future-seeing items return, this time in the form of tarot cards, often found off the beaten track. Finding them offers a glimpse of a possible future depending on your decisions. The twist this time around is the tarot cards are handed to the mysterious Eliza at the end of each chapter. She’ll read your latest tarots and you can pick one to see the vision behind it.

Eliza essentially replaces the Curator from The Dark Pictures Anthology games, offering advice to you if you want it, and setting an eerie tone for what’s to come. But she’s also integral to the story of The Quarry too, and she’s not alone. In fact, in addition to the nine counsellors, there are an additional nine other characters you can meet in one way or another across the night. It helps add weight to the background and story that is unfolding. The cast as well is excellent, with recognisable faces like David Arquette, Ted Raimi, and Ariel Winters to name a few.

The writing also feels the strongest yet, allowing that voice acting talent to thrive. Interactions between characters feel genuine, banter is free-flowing without being unbelievable, and cross words are exchanged with passion, too. The movement and facial animations are also very good. You’ll pick up a lot more through non-verbal cues than you normally would in previous titles. Plus the emotion on their faces and body language marry well with the dialogue, allowing you to immerse yourself fully into what’s happening on-screen. It also makes for better balanced characters than normal. Sure you have your stereotypes, with the jock; the nerd; the broody one; the joker, but there’s depth too. Aside from the fear, some will show vulnerability, and question themselves and who they are. It’s subtle, but it helps immensely to create believable characters. 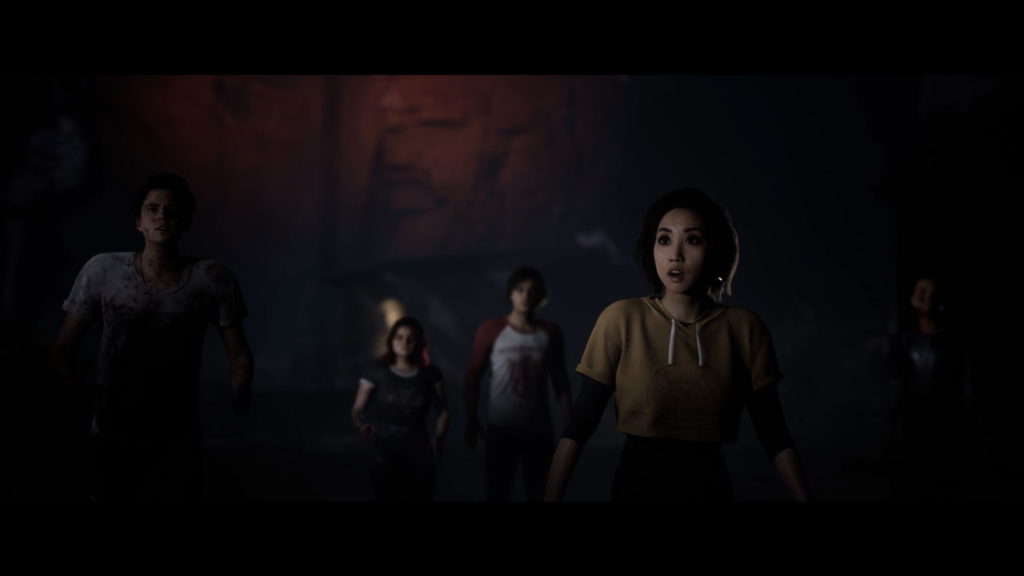 In terms of story, the biggest question will be whether it is interesting and whether the choices make sense. Well, fans of Until Dawn, or indeed old-school horror movies won’t be disappointed, as there are clear influences from both here. Its story does lean into the familiar at times, even poking fun at itself for doing so. But The Quarry is better for it because it doesn’t get bogged down in trying to subvert expectation too much or reinvent the storytelling wheel, and can instead focus on executing the story it wants to tell, which it does very well.

The scale of the game, in terms of runtime and characters, was always going to mean plenty of choices and even more outcomes than before. And with a reported 186 slightly differing endings, there’s definitely causality to your decisions. It’s always tough to balance free will and a need to tell a story, but The Quarry does it well, with different ways to achieve the same progress, as well as being brave enough to do away with people relatively early and have you miss entire sections of the plot. Boldly, you can even miss an entire final chapter if you make certain choices, and there’s even some ambiguity as to who the real enemies are in all of this. It’s up to you to make up your own mind. Your choices are more personal, rather than them being up against a yes/no checklist of the developer’s choosing.

All this makes replaying a must, which The Quarry earns despite its longer runtime. You can choose to play couch co-op mode with a friend to share the experience and it all works well like in previous instalments, and an online co-op option is coming later. The new movie mode essentially allows you to sit back and watch the action instead. You choose to watch the game where everyone survives, or a set of choices where everyone dies. Alternatively, you can become the director and set character traits for certain characters and then watch how they respond under your guidance. It’s an interesting idea that’s best used after you’ve finished the story at least once yourself. It does also seem strange to have a movie mode that will take you 4 or 5 hours to watch. But what it does do is reinforce the standard of the writing and character interactions as you immerse yourself watching with some popcorn. 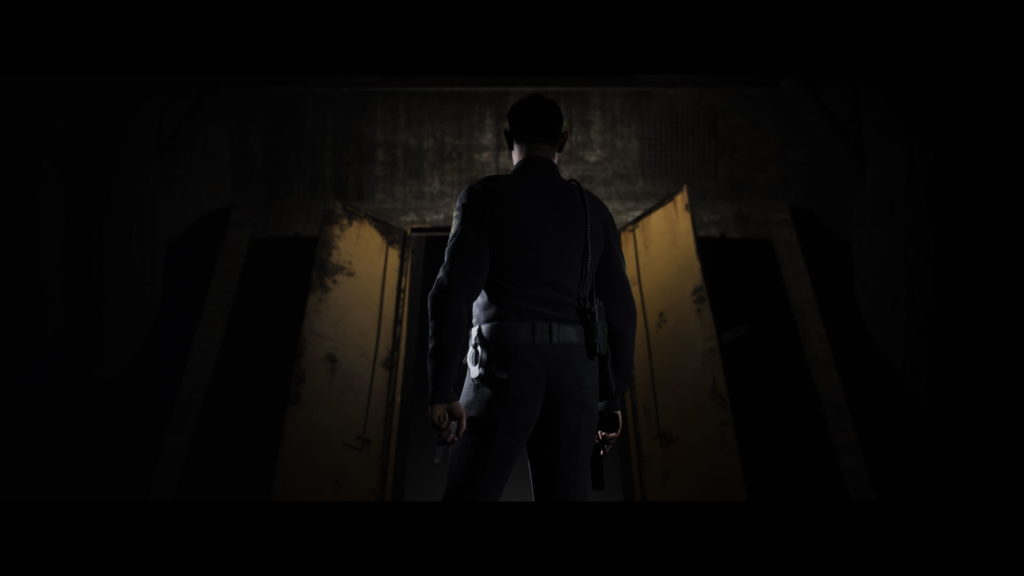 It is also worth mentioning that this game looks pretty good too. I played on PC, and thought the characters, and the surroundings of Hackett’s Quarry looked beautiful throughout. There’s attention to details, eerie but effective lighting effects and a selection of static and free-roaming cameras that help build tension well. The addition of a soundtrack playing over certain portions of the story helps set the tone, either in a calm way at the start, or as foil for dramatic moments, like something from a 90s horror flick.

The disappointment for me came after I’d finished the game. I’m a collectible nerd, and in previous games, there’s always been a record of what you’ve collected stored in the menus for you to peruse. But in The Quarry this is absent. It might seem minor, but when The Quarry changes its endings based on the evidence you collect, it’s important to know what you’ve found and where you might have missing pieces still to find. Similarly with tarot cards, given you can only choose a single tarot card vision. To see all of them, you’ll have to replay multiple times, and even then you will never have a record of all of them in one place, which you did in previous games. It seems like a simple omission that is at odds with the collectible mechanics at play.

The Quarry is a true return to form. Ironically, by releasing itself from the shackles of its Dark Pictures formula, Supermassive has demonstrated how epic and dramatic a game it can make. It’s full of mystery, character, scares, and tough decisions, all propped up with a cast and story that delivers, whatever your choices. Whilst some of its tweaks and additions work better than others, the overall package delivers. Dare I say it, The Quarry may just be Until Dawn 2 in all but name, and that’s high praise indeed.

Collectibles do not carry over
Movie Mode is a large timesink

The Quarry is one of Supermassive Games' best titles, harking back to the glory days of Until Dawn for all the right reasons.