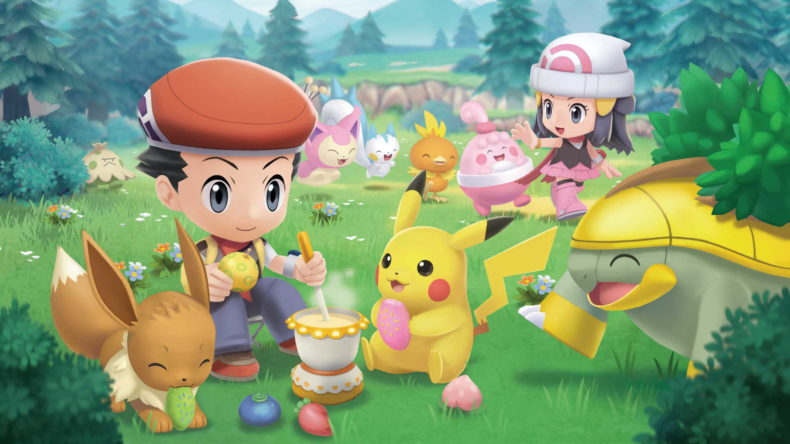 Pokemon Brilliant Diamond is like a warm hug from a loved one. You’ve probably had one before, and you know it’s going to be good. But nonetheless, when it happens, it feels like the first time all over again, and like everything is going to be alright for a while. While this is a faithful remake, for the most part, there have been quality of life changes that bring it right up to the modern era, which is going to please some, and upset others.

It’s been some fifteen years since I last visited the Sinnoh region in Pokemon Diamond, Brilliant or otherwise. And it genuinely took me by surprise both how fresh it felt, but also how much I remembered. With a simple story that has been told many times before, Brilliant Diamond is the stop-gap game for many that is aiming to fill the Pokemon-shaped hole while the new Legends: Arceus game is being developed. You’re a young lad or lass and your “mom” lets you disappear into the wilderness chasing your dreams of being great at Pokemon, while also trying to keep up with your rival and best pal. 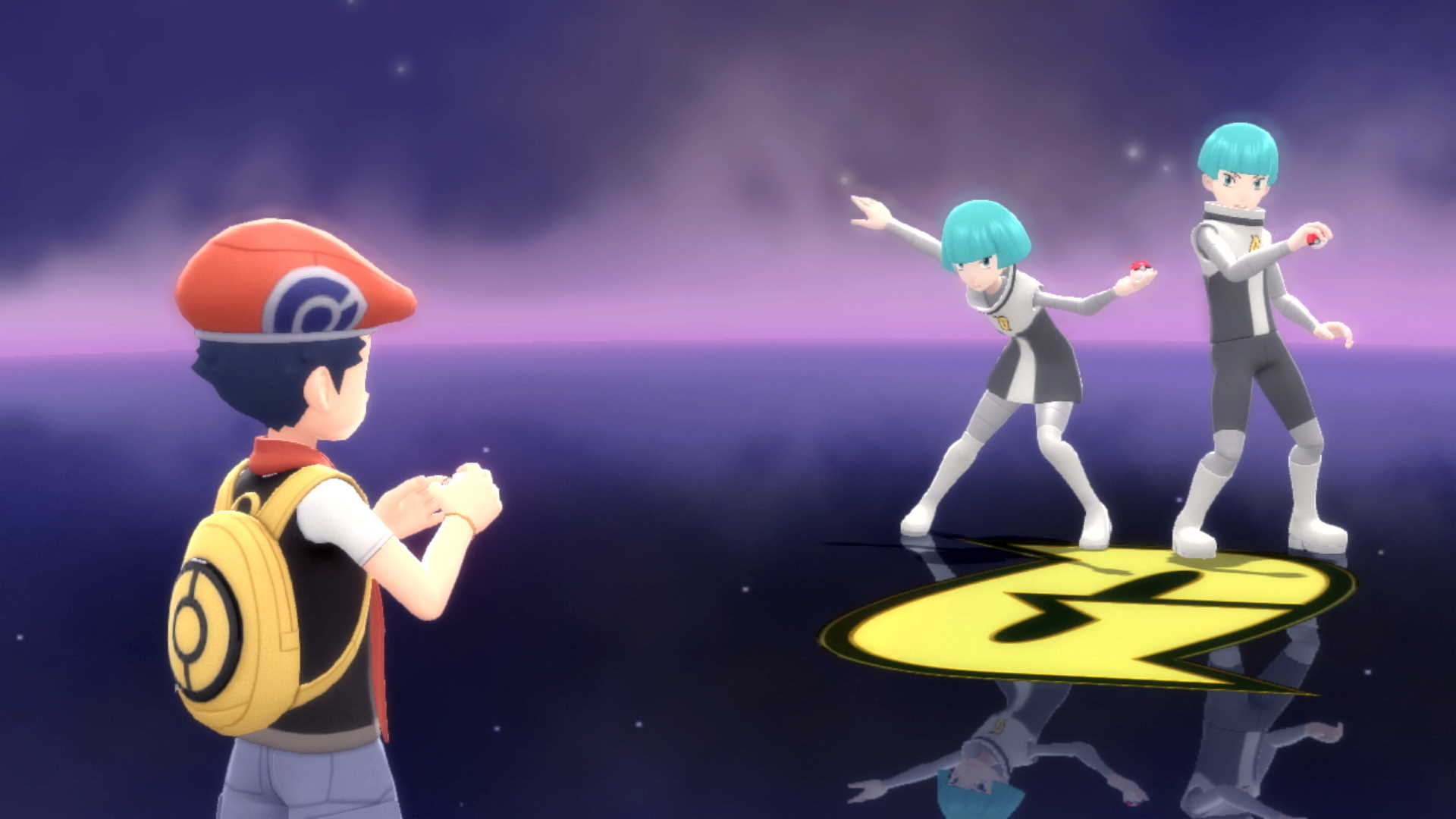 As you’d expect, there’s an evil team with nefarious designs on the world that involves some form of Pokemon abuse, and you’ll beat them up along the way as well. As a newbie trainer, you’re going to go through dark caves, mountainous areas, and treacherous jungles as you go town to town defeating gym leaders and getting badges which, frankly, serves as an excuse to give you new traversal options for the main overworld.

For example, after defeating your first gym you will gain the ability to bash through small rocks. Eventually, you’ll learn more interesting skills, all of which can be called upon with your trusty “Poketch”. This is a smartwatch of a kind, at first offering a calculator app and an in-game step counter, and again, later getting more interesting. I hate to continually be vague about later game things, but given the age of the original title, I’m hesitant to accidentally spoil any kind of reveal for new players. What I will say, however, is that while the Poketch was once the bottom screen of a DS and is now called upon with a quick tap of the R button. Hitting it again makes it almost full-screen, allowing for touch control when used in handheld mode. 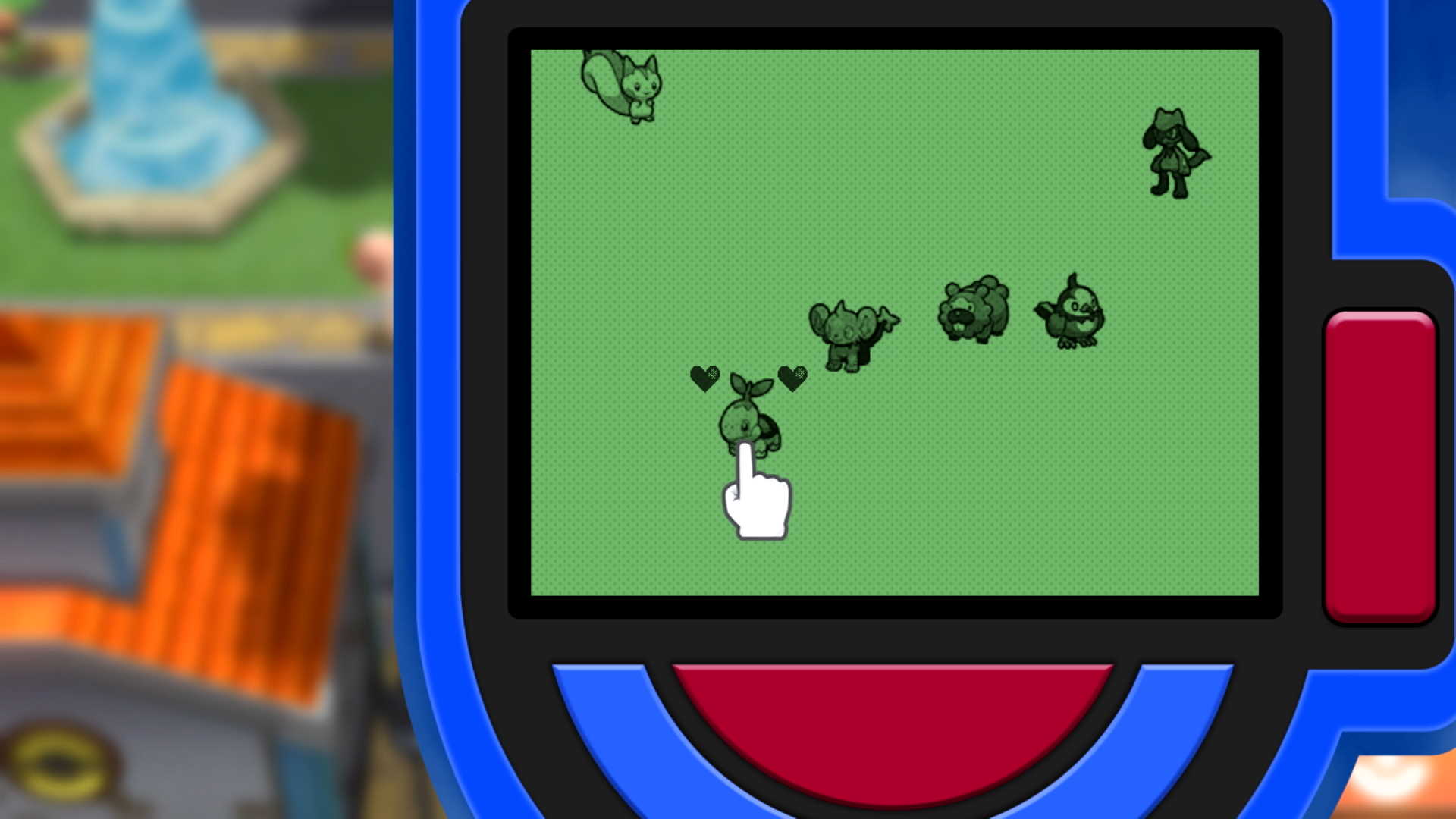 On that note, I played a large amount of Pokemon Brilliant Diamond on the Switch OLED via handheld, and didn’t notice any other touch-screen controls. There’s a cooking minigame where you make “Poffins” to increase your Pokemon’s conditions (beauty, cool, cute, smart, touch) that allows you to make them better in a larger sub-quest that’s essentially a beauty contest, but this is fully controlled by the left stick rotating, This was, again, touchscreen originally, but isn’t now.

The turn-based combat of Pokemon has always been deeper than many people realise. But it is also fairly easy if you’re a seasoned JRPG player. If you are the kind who likes to defeat every enemy you see on the way you’ll almost certainly end up over-leveled within the first ten hours. It’s very easy to do this, especially if you find some of your favourite Pokemon early on. I was lucky enough to get an Abra. He stuck with me for a silly amount of hours, able to one-shot most (but not all) opponents first try. There’s still some daft moments present, too, like a fisherman-trainer taking you on with his six Magicarp. It’s a waste of time as a battle, but it is also a pretty clever joke which I can respect, and adds colour to a world already brimming with personality. 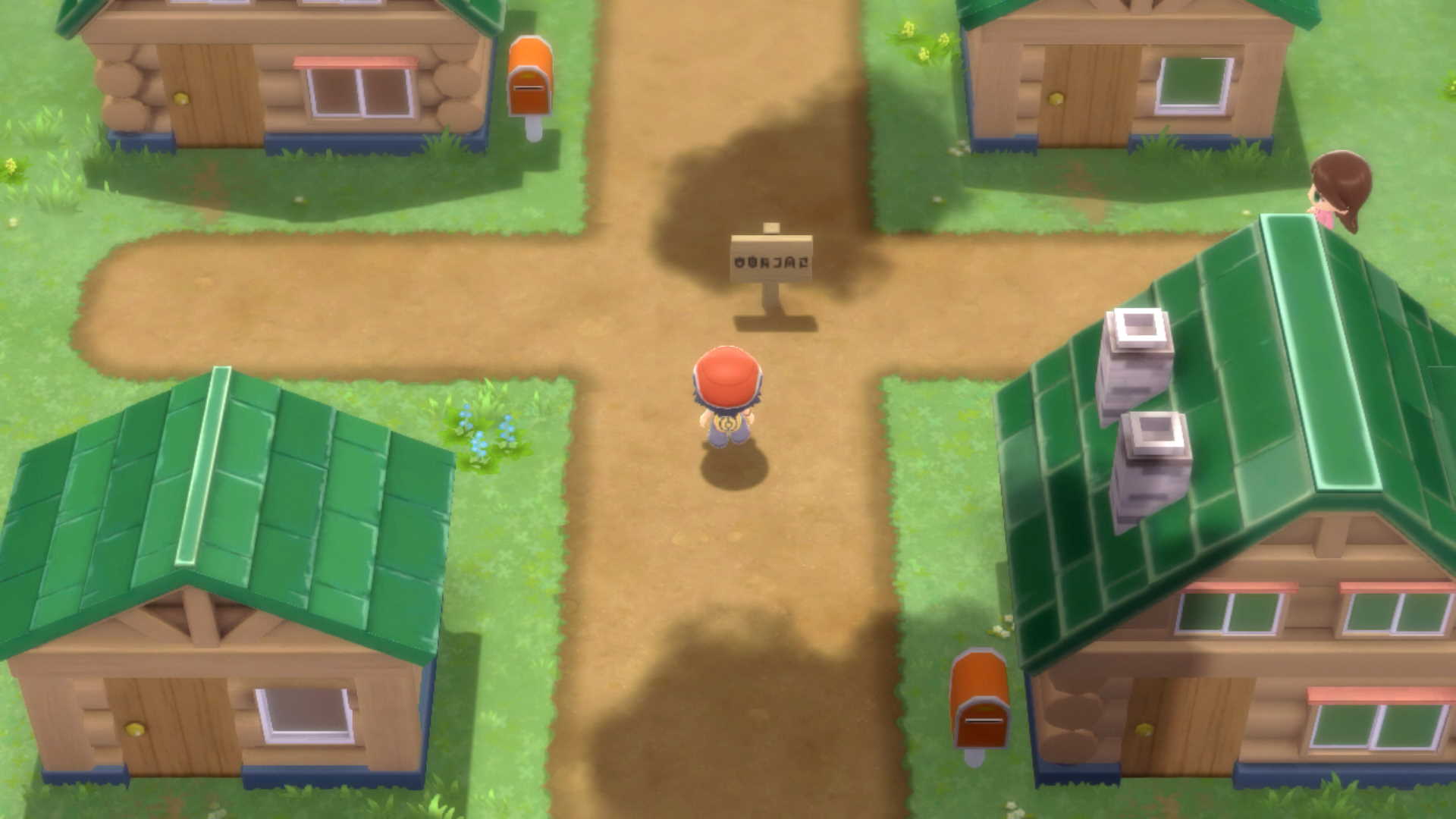 There’s still plenty to get stuck into for the hardcore fans, though. Male and female Pokemon, movesets, eggs, evolutions; endgame: it’s all present and as you remember it. What has changed, mind you, is that a lot of the modernisations from the more recent games have made their way into Pokemon Brilliant Diamond. For example, after a few hours, you can just use your Pokemon storage box from the field, without needing to attend a Pokemon Centre. This makes it easier because if you do happen to have a friendly monster faint, you can just swap it out after a battle without the need to revisit a town.

Online has been massively streamlined, too. There’s a huge underground area which can be explored with friends, offering yet more mini-games. This has been upgraded from the original game, which is a nice touch. You can trade easily, and it’s a game that is very easy to hang and play with friends locally, or online. It’s all just exactly as you’d hope it would be for a Pokemon game released in 2021. There are shortcuts for items you use loads. It just feels very modern. 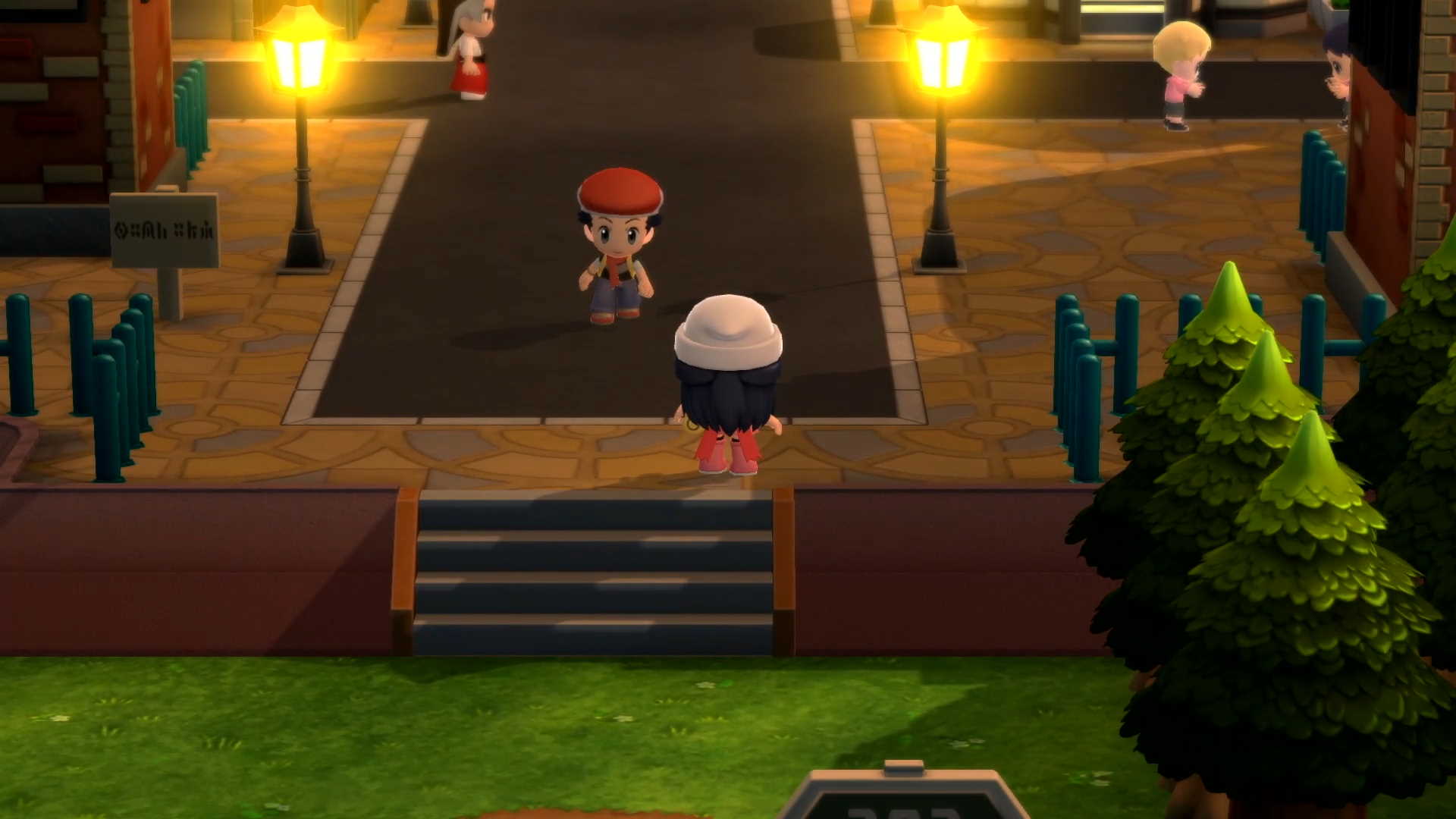 Then there’s the art style. Look, I like the chibi appearance of this game in the same way I liked it in the Link’s Awakening remake. I’m not going to try and change anyone’s mind, but I think it’s a catch-22 situation for these games really. Release it with the same art style as in 2006 and people will complain that not enough work has been done. But then, what’s the alternative? Go super-realistic? This is the right route for this remake, and it’s got a charm that makes you smile throughout. In battles, there’s a more realistic aesthetic on show, but again, it’s a stylised cartoony vibe that’s going on here.

When it comes to Pokemon, you’re either a fan or you aren’t. Pokemon Brilliant Diamond isn’t going to change minds, nor is it intended to reinvent the wheel when it comes to the series. What it does, however, is remind us of one of the best adventures in the series while bringing it right up to date with gorgeous visuals, quality of life updates, and performance that I didn’t spot a single frame drop during. This is a developer showing reverence for the source material while making it worthy of a replay 15 years on, somehow making an old game essential once again.

Main game is too easy

Pokemon Brilliant Diamond is like a warm hug, offering nothing but smiles and enjoyment throughout. Long term fans will find the quality of life changes make it even easier, but nonetheless, it's an otherwise faithful remake and a joy from start to finish.