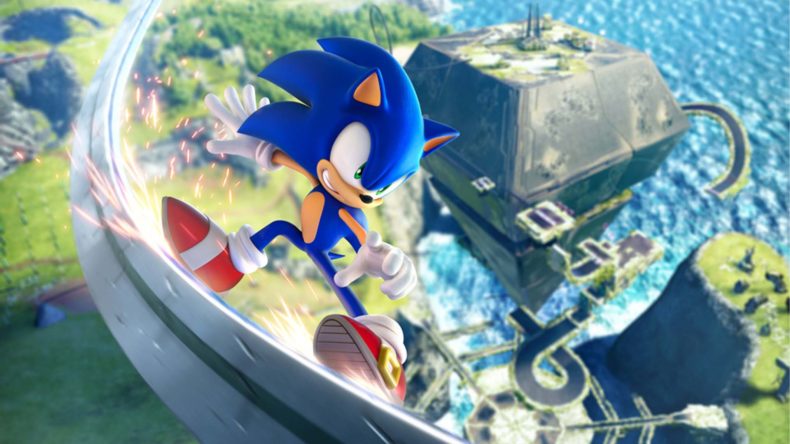 As somebody who has spent his entire life loving the adventures of a certain Italian plumber, I’ve always admired those who grew up loving Sonic. While I was happily enjoying every delightful platformer that Nintendo had to offer, Sonic fans have had to face some real hard times. Well now might finally be the moment that those Sega diehards have been waiting for, because Sonic Frontiers is here to change the game.

While off on an adventure with Tails and Amy, our blue spiky hero finds himself on a set of mysterious islands that once housed an ancient civilisation. Almost immediately you’ll realise something is a little off about this place, when Sonic gets teleported into Cyber Space and into a traditional platforming level. Upon his return he discovers his buddies have been kidnapped, and that huge robot bosses are roaming the island trying to off him. There’s only one way to stop them, Chaos Emeralds of course, so it’s time to get gathering.

In case you’ve been living under a rock for the last few months, what makes Sonic Frontiers different to other 3d sonic games is the fact that it is an “open zone” game. That’s open world to the rest of us, and means you’ll spend most of your time exploring sprawling lush islands for different doohickeys to allow you progress and get stronger. I was a little sceptical about how this would translate to a Sonic game, but had nothing to worry about. 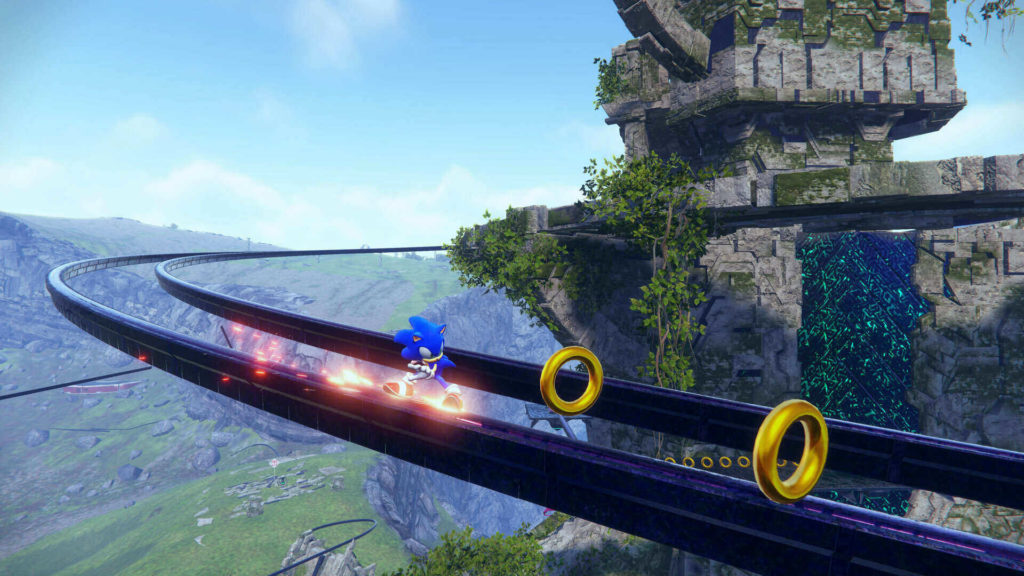 One of the main collectibles you need to gather are memory tokens that connect you to your missing friends. These are scattered absolutely everywhere on the islands, and usually require you to follow a pathway of rails and springs floating in the air to collect them. This means while exploring the world you’ll be sprinting from thirty second obstacle course to thirty second obstacle course, constantly greeted with a new platforming challenge to tackle.

The other essential collectibles in Sonic Frontiers are keys. These open up the Chaos Emerald shrines, which you need to take on the big bad bosses of the islands. You’ll mostly find these keys in the Cyber Space levels, which are (fairly short) traditional 2d and 3d Sonic platforming stages. Full of rails, enemies to homing attack between and plenty of opportunity for speed, these levels are the best example of what Sonic was before going open world (even taking place in some familiar environments) and provide a perfect bit of respite from the exploring.

You’ll only get the keys by achieving certain objectives in these stages, which means you’ll probably be replaying them a few times to bag the lot of em. There’s a key you get for just completing the stage, but the others require a bit more effort. One requires you to find the five special medals throughout the level, another is awarded for finishing the stage with an S rank time. These tricky tasks mean you’ll really learn the levels inside out, and it feels like a great accomplishment when you finish the checklist. 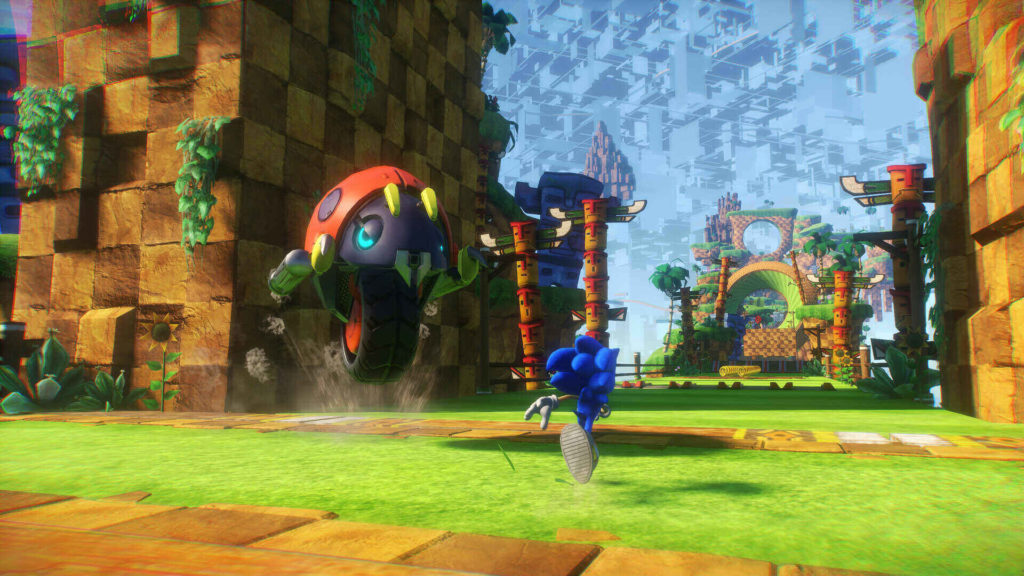 It isn’t all running and jumping in Sonic Frontiers though, there’s actually some pretty deep combat to dive into as well. It’s fair to say that I wasn’t expecting varied unlockable combo options and the ability to parry in a Sonic game, but it’s put to good use in Frontiers. There’s a vast array of enemies inhabiting the Starfall Islands, and you can’t just button bash your way to victory against even the simplest foe. Some enemies require you to draw a magical circle around them (known as a Cyloop) to make them vulnerable, others require parrying to beat or even you to run up their bodies like in Shadow of the Colossus. Some are admittedly more annoying to take on than others, but the sheer variety is impressive.

You’ll need to make sure you make Sonic stronger if you’re hoping to rescue everybody and escape the islands, and there are plenty of ways to do it. By collecting lost Coco (the weird little round guys who once lived on the island before things went wrong) you can upgrade your speed and Ring capacity, and by collecting red and blue seeds and giving them to the Elder Coco you can upgrade your attack and defence. You can go up to level 99 in all of these stats, so expect to be a bit more of a powerhouse by the end of the game.

The seeds especially are important to focus on, and are most commonly found by doing mini games at spots marked by a question mark. There are a ton of these strange distractions, and they range from skipping with a laser beam and blasting balls through hoops to tile puzzles. Beating these will always give you a seed, and will also reveal a section of the map showing where to find all the collectibles you need. 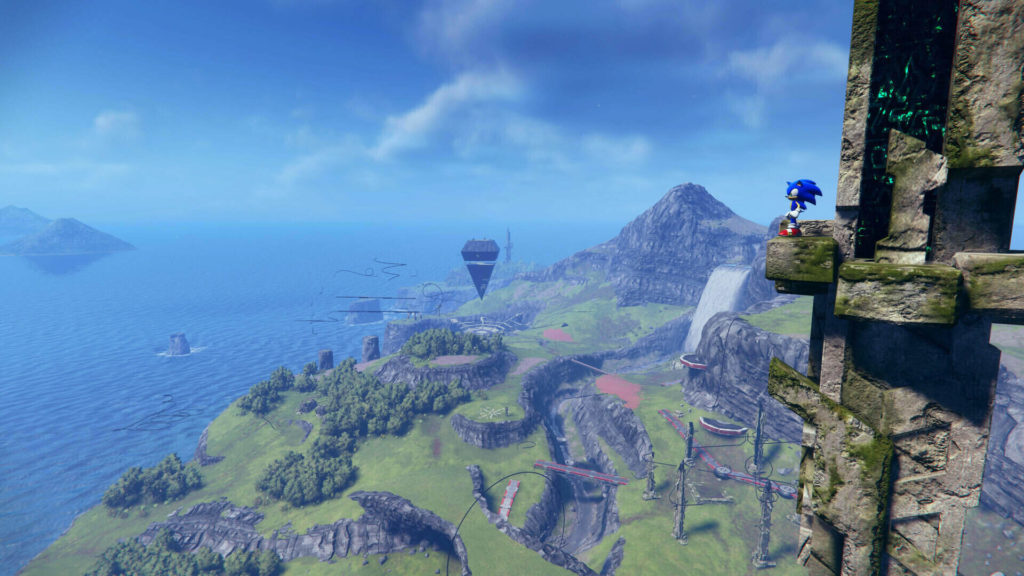 If you’re really desperate for collectibles and don’t want to have to jump around or solve puzzles though, you could always just go fishing. Despite being very simple (essentially just timing a press of the X button) it’s actually pretty damn compelling, especially when you start hooking massive sharks and monster truck tyres that Sonic just stands grinning at proudly. Each catch is worth a different point value, and you can trade points for every single type of collectible. If you want to power up your attack then a thirty minute session with the rod will boost you more than hours exploring, and you can even get story collectibles this way.

If you thought the fishing sounded a bit odd then you’ve seen nothing yet. Sonic Frontiers is a truly weird game, with some mechanics that baffled me throughout. For example there’s a day and night cycle which might sounds pretty ordinary, but some nights there are meteor showers which litter the environment with chunks to collect that create multicoloured lasers as far as the eye can see. When you grab one of these a slot machine will start spinning and will award you fishing tokens for good results. Why does this happen? I have no idea, but it certainly does.

So many aspects of the game feel like they were cherry picked from other games and smooshed together with great force. The music in the overworld is emotional and gentle, which just feels totally at odds with the gnarly rail grinding and Sonic’s dumb jokes. The colourful Sonic characters don’t look like they belong with the creepy future robots or the realistic environment, and all of it creates a jarring experience that somehow sort of works. 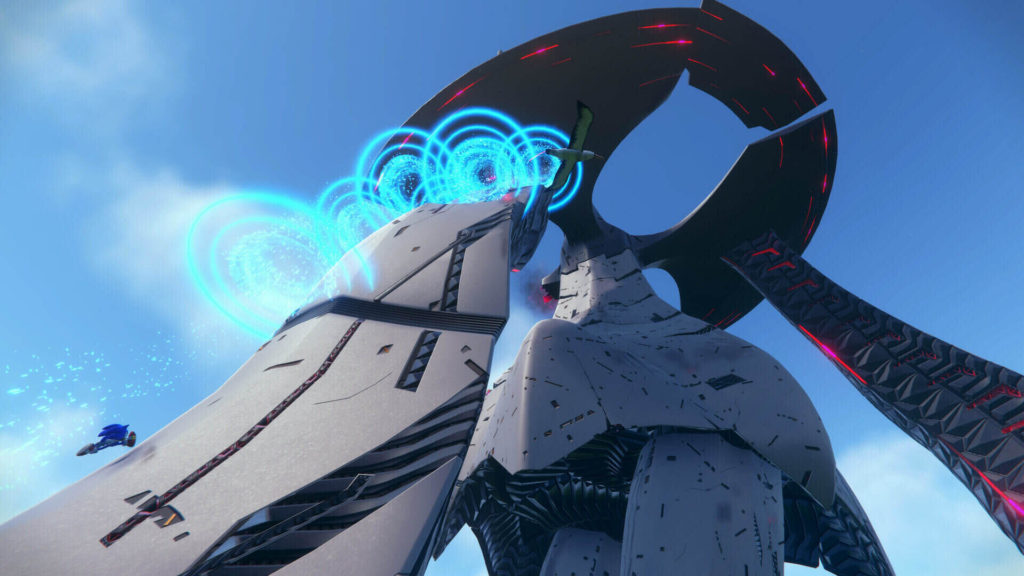 There are some aspects of Sonic Frontiers that simply don’t work though. The combat although very interesting, can often border on frustrating, with enemies (and bosses especially) constantly blocking attacks relentlessly. The parrying is a bit of a let down as well, because it isn’t timing-based you can just hold the button to avoid taking damage practically indefinitely and will even trigger a powerful counter.

The platforming has its issues too unfortunately, often to do with the flow of movement. Often sections feel very stop and start, and Sonic is oddly cumbersome when he loses momentum. As with every 3d Sonic game you’ll also have to deal with a homing attack that can occasionally refuse to lock on, which doesn’t help when bouncing between springs to safety.

It’s also worth mentioning some technical issues that I experienced with Sonic Frontiers. The good news is that the framerate is actually really stable, and is silky smooth in 60fps mode. The bad news is that if objects popping in from nowhere annoys you then prepare to be annoyed. Whole sets of rails, climbable walls and platforms materialise from out of nowhere, and I can’t think of another game that has this happen to the same degree from the last few years.

Despite having some issues, Sonic Frontiers takes the series in the most exciting direction it has been in in many many years. The loop of finding different collectablis is intoxicating, and the gameplay is so varied you’ll never get bored. Sonic Frontiers could be the (slightly shaky) start to a new era for the blue blur, and I can’t wait to join him for the ride.

Sonic Frontiers has its fair share of issues, but the open world direction and varied gameplay makes it the most exciting Sonic game in decades.